By By Carmen Pauls, and the University of Regina, School of Journalism 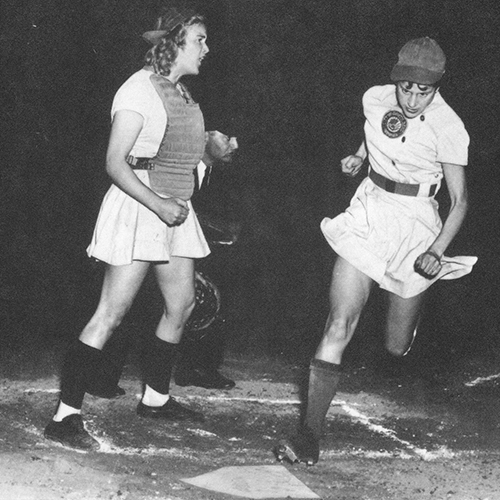 Daisy Junor is waiting for me outside her south Regina apartment, a smile on her young-looking, 76-year-old face. She shakes my hand, then holds it in hers. Looking at me, she says, "You've got soft hands. You don't play ball, do you?" Then she gently leads me into her apartment, still holding my hand.

She's right. I don't play baseball. But Daisy does - or did, in the glory days of women's baseball, the 1946-49 seasons of the All-American Girls Professional Baseball League.

The league began in 1943, the brainchild of chewing gum magnate Philip Wrigley. Wrigley, who owned the Chicago Cubs, feared American baseball was going down the tubes. With major-league players going off to fight in World War II, Wrigley was afraid the ballparks might soon be empty.

Wrigley decided to satisfy the craving for America's game with a professional women's baseball league. He sent scouts all over North America, including southern Saskatchewan.

Daisy's team, with players from Regina, Moose Jaw and Estevan, had just won the Western Canada Softball League tournament, and Wrigley's scout came to see them play. Pleased with what he saw, he invited players to come down to Chicago for spring training.

Twenty-two-year-old Daisy had just gotten married, so she turned down the offer. But her sister Ruby went, and was picked to play for the Racine Belles. Over the next couple of years, as her sister and other girls came back to Saskatchewan with glowing reports, Daisy became more and more eager to go.

In the spring of 1946, Daisy heard that the training season would be in Pascagoula, Mississippi, on the Gulf of Mexico. Dave Junor, Daisy's husband, told her he'd never be able to afford to take her there, so she might as well go. She did, and was signed with the South Bend (Indiana) Blue Sox, as a left-fielder.

"It was a very serious game," Daisy remembers. The girls would play every night, with double-headers on weekends, and only got a day or two off all summer. At home in South Bend, the girls trained every morning and played at night under the hot stadium lights, so there was little time for socializing. In the movie A League of Their Own, the girls lived together in a rooming house, but the real players boarded with South Bend baseball fans.

The travel schedule was gruelling. The girls headed out to away games every week or two. "We were always coming and going. We were living out of a suitcase most of the time," Daisy recalls. "I always said, 'Gee, it'd be good to have some home-made mashed potatoes.' "

When the players finished their away games at 11 at night, cocktail lounges and bars were the only places open. They would have steak and a beer, then race back to the hotel. The team manager, Chet Grant, and their chaperon, Lucille Moore, would be waiting in the lobby. Then Lucille would go up to do room checks.

That was when the fun began. "As soon as the chaperone and the manager went to bed," Daisy says, "the girls would get together and pick up the phone and order beer and play poker. And sometimes we'd play until 2 or 3 in the morning, and the stakes were always pretty high."

Daisy's plan was to stay in the league for only a year, but then the announcement came: the 1947 spring training would be in Havana, Cuba. There was no question: she would be back!

Daisy remembers the Cuban experience vividly, even though the players weren't able to see much of the country. Cuba was in political turmoil, and the popularity of Fidel Castro, then the University of Havana student body president, was growing steadily. League organizers were afraid that in the joyous chaos of the May Day Parade, someone might stage a coup. So, says Daisy, "they locked us up in the hotel, and told us we mustn't leave for the whole day."

Cloistered in their hotel, some of the players were desperate for junk food. As clusters of little Cuban children gathered below, Daisy recalls, the players tied their bed sheets onto wastebaskets, put money into the baskets, and lowered them down. Even though the children didn't speak English, they understood what they were supposed to do. "(We'd) say, 'Coca Cola, pineapple,' and they'd grab the money and run," Daisy says. Some of the children came back; some didn't.

The Cubans, especially the men, were enamored with the baseball starlets. Men in white Panama suits would "sit in little alcoves across the street (from their hotel,) and touch themselves while watching us. Then the police would come with their billy clubs" to chase away the gawkers, Daisy remembered in an interview with Lois Browne, author of Girls of Summer, a book about the league. During our conversation, Daisy added, "I went down to the desk, and I told them about it... and they said that we were not to look!"

Back in South Bend, Indiana, the players were treated with more respect. Even so, the girls, from what was sometimes called the "American Glamor League," had a tougher time than their male counterparts. The girls were expected to play ball like men, even though they were wearing short skirts which caused serious leg burns and bruises during slides.

The girls received lessons on how to charm a date, wear makeup and skirts, and sip tea like a lady. The All-American Girls were to be every boy's ideal woman as well as the girl next door. "Frankly, I'll tell you, it didn't work with some of them," Daisy says. "Almost all these girls were tomboys, and they all looked so funny in skirts."

But whether it was the posture lessons or their skills on the field, fans loved the All-Americans. Fans would grab a player's glove as a souvenir, or stake out players' homes to catch a glimpse of them. "It was very exhilarating," Daisy says. "After the ball game, we could hardly get to the dressing room (because of the requests) for autographs."

Fifty years later, the fans are still coming for autographs. In Arizona, four of Daisy's friends from the league regularly go to local shopping malls to sign and sell autographed baseball cards. "It's almost a living for them," Daisy says. "They say the people just love (them) there."

And if you let her get her ball and glove, she'll come play catch with you any time.

(Daisy is scoring in the photo.  Ruth Lessing is the Catcher) 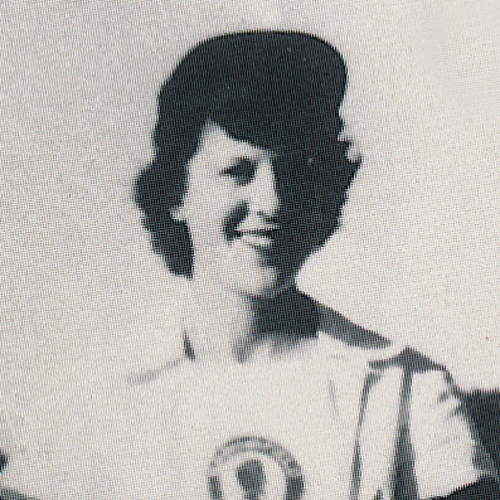