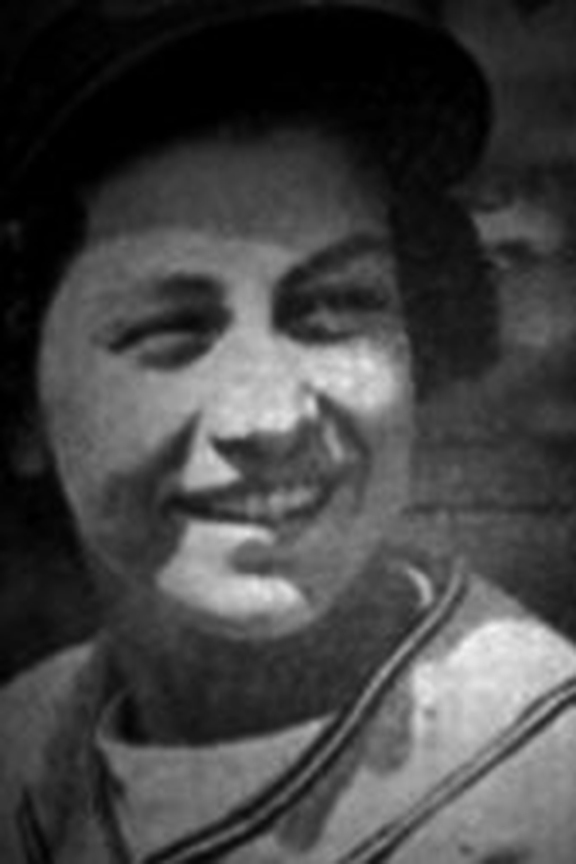 Gosbee, Annie
By Laurel A. Eisenhauer
Annie Gosbee loved playing baseball, a sport not usually pursued by women in the late 1940’s and early 1950’s. But Annie pursued her dream throughout her elementary and high school years and became a professional baseball player for the All-American Girls Professional Baseball League.

Annie Glenn Gosbee was born and raised in Essex, Massachusetts USA. She was born on December 29, 1935, a daughter of Roy and Maude Gosbee.  She had an older brother “Billy” (Raymond), a younger brother David, and 3 older sisters: Rosalie, Mary (May), and Stella. Her family lived in a house at 40 Main Street right on the Essex River, the site of the current restaurant Periwinkles. Her father tore this house down and built a restaurant (and another house which was later torn down to be a parking lot). Annie’s duties in the restaurant were peeling the potatoes - which she was not fond of doing, according to her sister Stella.   Annie loved to wear her hair in braids and loved wearing dungarees rather than dresses.

According to her sisters Stella and Mary (May), Annie got interested in baseball when her older brother Billy, who wanted to be a pitcher, made her his catcher and they would practice after school and whenever school was not in session.

She played on the Rufus Choate Elementary School (Essex) baseball team, the only girl on it. Local papers headlined: “Girl infielder Sparks Essex Team. The Rufus Choate School Baseball Team of Essex is Probably the Only School Team in Greater Salem with a Girl on the Regular Team. She is Annie Gosbee, Hard Hitting and Good Fielding Second Baseman.”   The team’s coach was Nathan W. White.

She would play baseball with the local boys after school- often in a field near the current town landing and the Essex Shipbuilding Museum. Leonard Woodman says “She taught me everything I know about baseball.”  When asked if there were ever any issues related to her being a girl playing baseball with the boys, Leonard said- “No –she was too good at baseball!”   Her sister Mary (May) does not remember Annie ever talking about the fact that she was the only girl on the baseball team.

During her teens Annie played second base on the Essex Legion team in the Cape Ann Junior League Conference. According to a newspaper report, “When she tried to join the Essex Legion team, the managers discouraged her, and besides, they thought there was a rule against a girl on the team.”   Annie is reported as recalling:“ One night, though,” they needed one more player, - and my brother [Billy] ran home shouting- they need you down at the park. They’ve just forgotten about the rule ever since.”

She was one of two girls playing on junior league baseball teams in the area. Avis Ruth Murray from Gloucester (current tennis pro at the Manchester Athletic Club) played on the Gloucester team and Annie played for Essex.

It was reported in a local paper that, because of the way Annie and Avis played, the other members of the team practically forgot that they had a girl on their team. They would yell “Atta boy” and quickly add while smiling “Atta girl”.  When the two teams played each other, the girls held “warm-up” sessions before the game by tossing balls “typically with a man’s pitch” to each other.

Annie’s coach, Bob Callahan, is quoted as saying:  “Annie is an excellent player. She learns very quickly. She has a good pair of hands and considers her to be a fair hitter. She plays second base and is a clever base runner.”  “She is among my four best ball players on the team.”   Her batting average was .270.

She was chosen one of the three most valuable players of the Essex Legion team, which was second in the Cape Ann Junior League Conference. She was reported to have “a smooth fielding style, a .275 batting average, and an all round baseball know-how that’s the envy of many North Shore boys.”

According to a newspaper article in the Gloucester Daily Times August 20, 1952 the League voted to allow the girls to compete the remaining schedule; however, it was announced at the banquet that girls would no longer be allowed to play in the  junior league.

“While baseball was her first love, it was not the only one. She was an all-around sportswoman, excelling in basketball, golf, tennis and volleyball.”  Annie is reported as saying: “But I never learned to swim, and I lived next door to the river.”

When Annie was attending Gloucester High School (which all Essex students of high school age attended at that time), there was no girls’ baseball team. However, Annie pursued her love of sports by playing on the girls’ basketball team for four years, and being its captain in her senior year. She also was a member of the girls’ rifle team. Her classmates voted her the most athletic girl in their senior class. In their class prophecy, her classmates said she would be one of the first women professional baseball players. In her 1953 yearbook she listed her ambition: to play for the A.A.G.B.B.L; to own the Boston Red Sox, and to be J. Edgar Hoover’s Private Eye.  She included as her characteristic interests: sports and Babe Zaharias (a woman who achieved fame in golf, basketball, track and field).

Annie’s dream was to play for the All-American Girls Baseball League (A.A.G.B.B.L.).  Annie first tried out for the professional girls baseball team in 1950 when their try out was in Everett, Massachusetts; she was not successful.  Not giving up her dream, however, she tried out again in her senior year of high school (1953) in Michigan. (Avis also was invited.) Annie earned money for the trip west to Michigan by washing dishes in a local restaurant.  She went to Battle Creek and then Grand Rapids, Michigan for the tryout from April 24 -27, 1953.  While in Michigan she was able to visit with her sister and brother-in-law Stella and Joseph Migliore in Detroit.

In the sports section of the Grand Rapids press (April 29, 1953) the headline read:“Infielder Impresses Local Manager - Annie Gosbee of Massachusetts Shows Promise”.  It reported that Woody English, formerly associated with the Chicago Cubs as a player and manager, as saying: “Another bit of brightness was added to the workout by the showing of Annie Gosbee, the Massachusetts rookie, at second base.”   Annie showed Woody a smooth fielding style, a nice throwing arm, and a know-all about the position that brought smiles to his face.

Annie played for two teams in Michigan 1953-1954: the Grand Rapids Chicks and then the Rockford Peaches.  She played second base.

As a Grand Rapid Chicks, Annie was chosen for All Star team of the American Girls League team, playing shortstop.

After the league closed, Annie left for California where her brother Billy and sister Rosalie were living. She attended a community college (Los Angeles City College)and continued her involvement in sports by teaching classes and playing nonprofessional basketball. She was employed as a library assistant.

She died in an automobile accident in the Glendale section of Los Angles California, struck by car while crossing the street, on December 9, 1976. She is buried in Spring Street Cemetery in Essex, Massachusetts

Annie Gosbee was inducted posthumously to the Gloucester High School Hall of Fame. (Other Essex athletes so honored were Chet Mulcahy and John Matheson).

From a printed account (possibly from the Induction into GHS Hall of Fame):

“Annie Gosbee was a born baseball player; her problem was that she was born in 1935.”“At the time, the only organized sport open to women was the rifle team. Gosbee excelled at that..,”

“Gosbee’s story of triumph and perseverance reminds us that sports is about much more than a bat and a ball. Sports is about more than winning and losing. It’s about character and teamwork and grit.”.

Contributed By: Laurel A. Eisenhauer