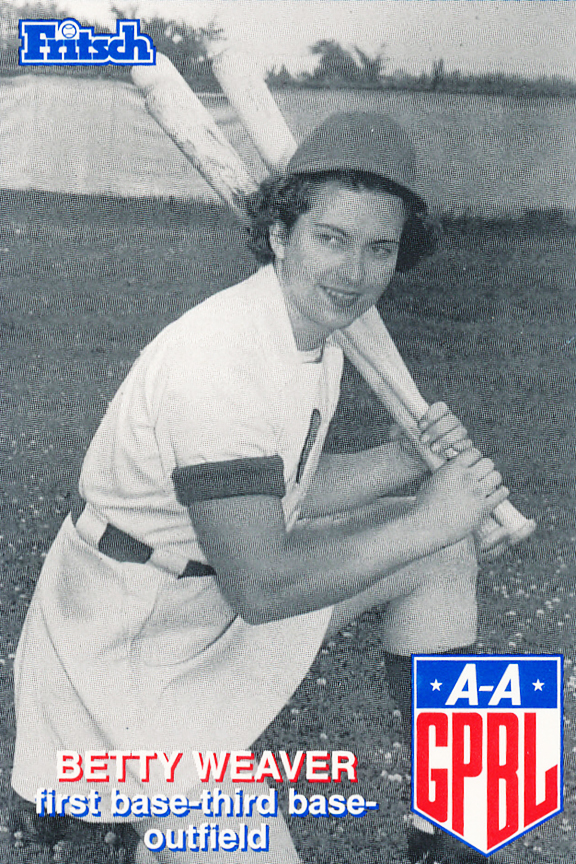 Betty Foss is the big sister of Jo Weaver and these two sisters were All-Stars who were feared by their opponents. There is a third sister, Jean, and all three played for the Daisies.  Betty was a hard hitting first and third baseman and outfielder and she led the league in hitting the first two years she played. As a great competitor she held most of the AAGPBL season records than any other player in the league. These records include: batting avg. .368, hits in a season 144, double in a season 34 and triples in a season 17.  Betty was named "Player of the Year" in 1952.

Professional baseball player Betty Weaver Foss was a switch hitting infielder and outfielder remembered as a superstar during the final years of the All-American Girls Professional Baseball League (AAGPBL).

Raised in downstate Illinois as part of a noted athletic family, she played top level men's softball in her teens and at one point was even offered a contract with the Chicago White Sox.

In 1950, Betty joined the Ft. Wayne Daisies of the AAGPBL and made an immediate impact, winning the batting crown with a .346 average and earning Rookie of the Year honors. The next year she took another batting title by hitting .368 while 1952 saw her named Player of the Year, and she receive the first of her two All-Star selections. In five years at Ft. Wayne, she and her sisters Jean and Joanne helped their team to the playoffs every year though the squad always came up short of the league crown. Over her career, Betty hit .342, second only to Joanne, while collecting 32 home runs and 294 stolen bases.  She holds the single season records for hits, doubles, and triples.

After the circuit folded in 1954, she played for a girls' barnstorming team as well as in men's softball leagues. She spent many years working in a Ft. Wayne pump factory before her 1994 return home where she died of Lou Gehrig's Disease on February 8 1998.  Ironically, it was the same condition that claimed Joanne. Betty was part of the 1988 recognition of the AAGPBL and its players at the Baseball Hall of Fame. The league's story is told in the 1992 film feature "A League of Their Own."