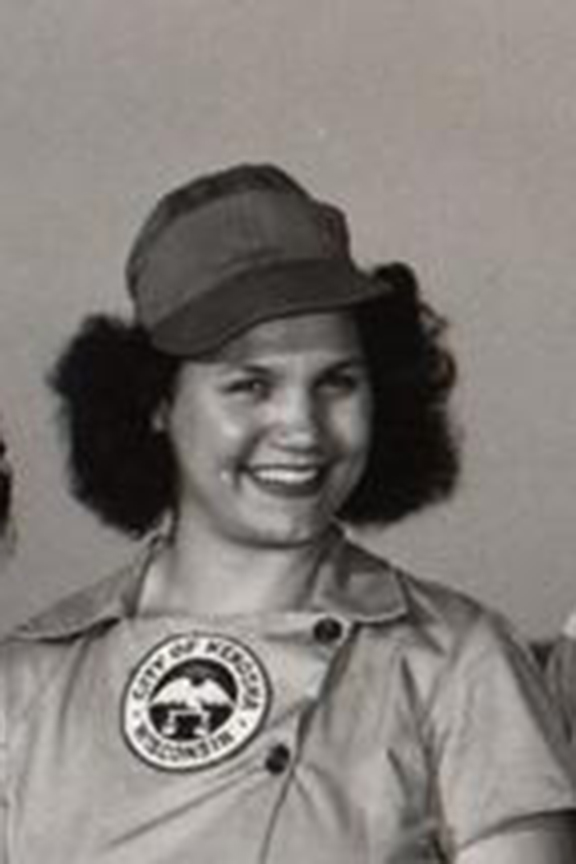 By Buttons was called the "Babe Ruth" of women's baseball.

Eighty-five-year-old Claire (Lobrovich) Krumpotich's gift was baseball and she pursued it with a passion as she led the way for other females to pick-up a bat and glove at a time when most considered the sport the sole domain of males.

"Mom loved playing baseball so much," said her son, Steve Krumpotich, "that she didn't care that most people when she was young didn't think females should play baseball."

That attitude began to change with the birth of the All-American Girls Professional Baseball League in 1943 during World War II to keep alive baseball fans devotion to the game at a time when so many of Major League Baseball stars were overseas fighting.

Krumpotich, a standout on several Santa Clara Valley baseball teams, caught the eye of a scout and soon after the 19-year-old took a train to Chicago were she successfully tried out for a spot in the league. She played first base and centerfield for one season in 1947 for the Kenosha Comets of Wisconsin (featured in the 1992 movie A League of Their Own) and later the Rockford Peaches in Illinois. Spring training took her to Havana, Cuba.

"Most of my girlfriends didn't play baseball," Krumpotich said. "But I loved the game and my parents supported what I wanted to do." With an infectious grin and pride, Krumpotich recalled that, "I was fast and hit a lot of home runs."

Krumpotich played in 81 games and had 51 hits, including two triples and three doubles and stole 15 bases in the pros. She stepped up to the plate 258 times and had a batting average of 207. Yet as much as she wanted to see how good she could get as a professional, Krumpotich missed her family even more and returned to Campbell where she grew up.

During World War II Krumpotich worked for Westinghouse in Sunnyvale in the machine shop smoothing out the rough edges of ammunition for battleships and later worked in a cannery. Krumpotich always found time for playing on a local baseball team even while raising three children with the support of her husband, a pitcher for several seasons on a Bay Area semi-professional baseball team.

Steve, who played high school baseball, as did his two brothers, said that his mother was a "slugger and a ripper," even into her 40s when she batted cleanup for the Los Gatos Wildcats. When she wasn't playing baseball she was coaching her children's Little League teams or working in the family liquor store in Cupertino.

"Mom was a fierce competitor but always super positive," said Steve as he played Bingo with his mother at Aegis of Aptos. "She had lots of upper body strength and could really smack the ball."

Krumpotich's strength was a result of working on the family 10-acre farm as a child lugging around 25-pound boxes of apricots and climbing up and down ladders picking fruit. She got her start practicing baseball with her older brother who was a star on the local high school baseball team.

By 2011 Krumpotich led a more sedentary life and lived alone since her husband died of cancer in2006. Still an avid sports fan, Krumpotich especially enjoyed watching San Francisco Giants games on television and reveling in the achievements of her seven grandchildren, four of who played high school baseball.

Krumpotich lived by several basic tenets, according to Steve. Be honest, work hard, respect your body and mind, look for the best in people and have some fun.

As Krumpotich faced the formidable challeng of coping with failing health, her spirit seemed to remain strong. And her apparent determination to find some joy in everyday life, regardless of its limitations or increasing discomfort, reflected a remarkable resolve to celebrate life.

Claire (Lobrovich) Krumpotich (April 5, 1923 - July 29, 2011) was an outfielder who played in the All-American Girls Professional Baseball League in 1947.  She batted and threw right handed.

Claire was born in Campbell, California, to Mitchell and Mary (Brayevich) Lobrovich.  Her father, born Mihovil Lobrovich, was Croatian, while her maternal grandparents were Slovenian emigrants.  She spent two seasons in the league, including a year with the 1948 pennant-winning Rockford Peaches.

"Buttons," as her teammates dubbed her, posted a batting average of .209 (54-for-258) with three doubles and two triples in 81 games, driving in 21 runs and scoring 22 times while stealing 15 bases.  At outfield, she recorded 69 putouts with seven assists and committed six eerrors in 82 total chances for a .927 fielding average.

In 1988, Claire received further recognition when her name was included in a list of AAGPBL players as part of the Women in Baseball display opened at the Baseball Hall of Fame and Museum in Cooperstown, New York.