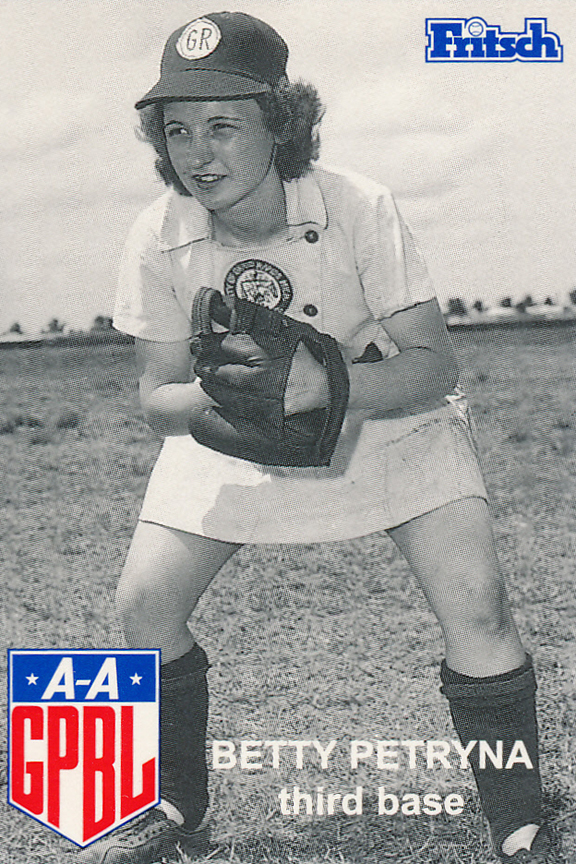 Doreen "Betty" (Petryna) Allen Mullins was a rock-solid player at third base. She established an AAGPBL all-time record of 12 assists in one game. Betty recalls her contributions to the Grand Rapids Chicks in their 1948 win of the Eastern Division Championship. Betty retired in 1950. She and her fist husband raised three children and coached them in softball.

Born on November 26, 1930 in Liberty, Sask., Mullins played parts of two seasons in the AAGPBL in 1948 and 1949.  In 25 games with the Chicks in 1948, she recorded seven hits and scored six runs. The following campaign with the Daisies, she toiled in 97 contests and collected 43 hits and 29 walks. She was a defence first infielder who holds the AAGPBL record for most assists (12) in a single game.

Though she was born in the tiny farming community of Liberty, her family moved to Regina when she was 10. She told The Mid-Week News, a DeKalb County, Ill., newspaper in a June 2012 interview that she got a late start playing softball.

“I didn’t ever really play softball until high school,” she told the paper. “I’d sit on the back porch and watch my brothers practice. One was a pitcher and one was a catcher and I was just mesmerized, but I was never allowed to touch their mitts. But when I was in high school we had a relay day, where we ran and did different events. We had a baseball throw. I guess I must have thrown the ball a long way, because I won that particular event. It didn’t mean that much to me, but my P.E. teacher must have seen I had talent in something because she pushed me into basketball and into softball.”

Mullins was scouted for the AAGPBL while she was playing for the Regina Oilers baseball team.  After two seasons in the AAGPBL, she retired and settled in DeKalb County, Ill., with her husband Roger Allen and raised three children.

At age 47, she obtained her teaching certificate and became a special education teacher for more than 20 years.

In 1998, she was one of 68 Canadian women who played in the AAGPBL to be inducted into the Canadian Baseball Hall of Fame in St. Marys, Ont.

Her first husband died in 2000 and she remarried to Don Mullins. She spent her final years in Sycamore, Ill.