Doris was not only a chaperone but she was also an assistant coach for the Daisies. 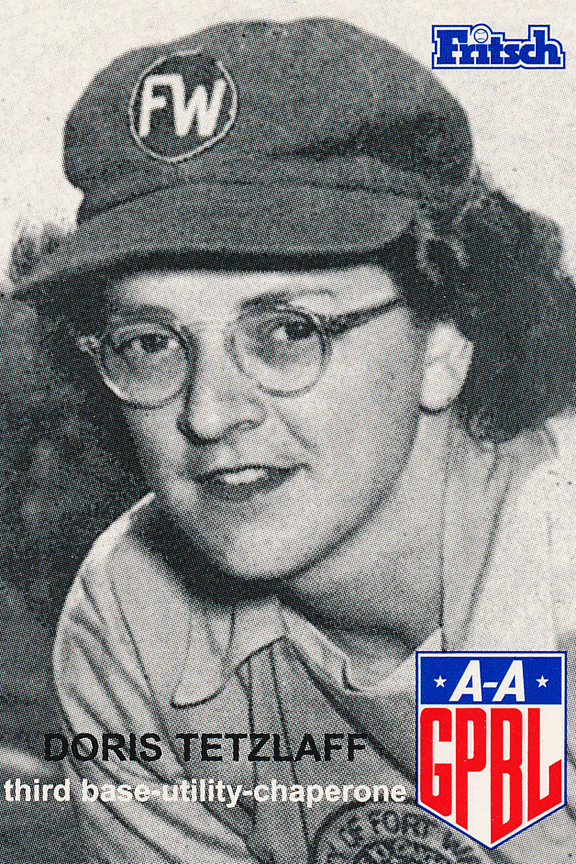 Doris was not only a chaperone but she was also an assistant coach for the Daisies.

By Doris was not only a chaperone but she was also an assistant coach for the Daisies.

Doris was part of an innovation in the AAGPBL as she became a chaperone and assistant coach for the Daisies after a successful playing career. Her duties included running practices and coaching the bases. She was a graduate of Wisconsin State Teachers College with a degree in physical education. Doris came into the league as a third baseman for the Milwaukee Chicks and then moved with the team to Grand Rapids and remained one of their key infielders until 1948. She then was assigned to Ft. Wayne and then finished her playing career with the Muskegon Lassies in 1949.

With her vast amount of baseball knowledge and her past experience as a player, Doris made a very capable assistant to Max Carey and also a very efficient leader as the chaperone.

Doris E. "Tetz" Tetzlaff was an infielder and chaperone in the All-American Girls Professional Baseball League. Listed at 5'5", 155 lb., she batted and threw right handed.

Little is known about this woman who played different roles during ten years in the All-American Girls Professional Baseball League. A native of Watertown Wisconsin, Tetzlaff came from a family of German origin. She was a valuable utility player, playing mainly at third base for five different teams teams from 1944 through 1948.

Tetzlaff entered the league in 1944 with the Milwaukee Chicks, playing for them one year before joining the Grand Rapids Chicks (1945–1947), Chicago Colleens (1948), Fort Wayne Daisies (1948) and Muskegon Lassies (1949). She returned to the Daisies in 1950, serving as a chaperone and assistant coach for managers Jimmie Foxx and Bill Allington until the 1953 season.

Tetzlaff also went to the playoffs in all of her ten seasons in the league, being a member of two champion teams in 1944 and 1947. She is also part of the AAGPBL permanent display at the Baseball Hall of Fame and Museum at Cooperstown, New York, which opened in 1988 and is dedicated to the entire league rather than any individual player.