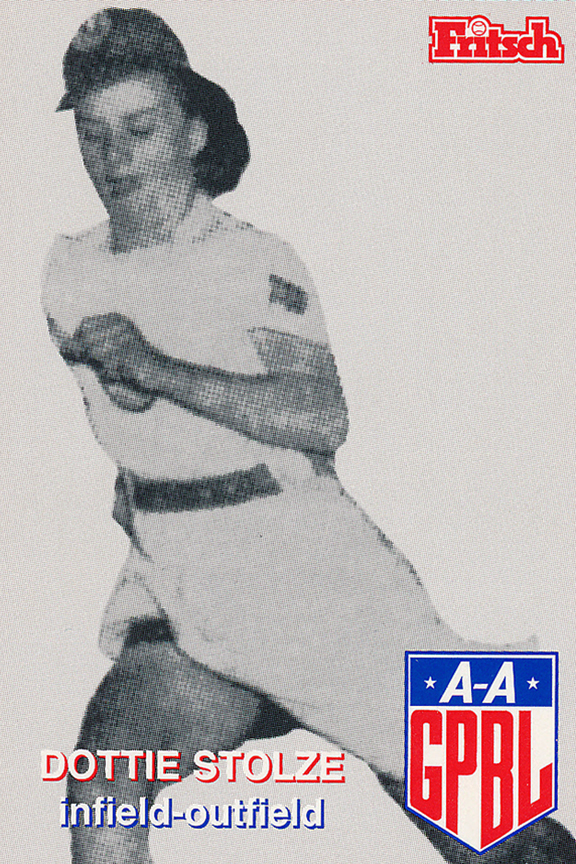 "Dottie" made an unassisted double play at first base while playing short stop in 1946. Later she found the right position and that was second base where she became one of the best in the league.  Dottie was described as an impetious, enthusiastic, sometimes erratic and just as often a brilliant player. She played shortstop and leftfield for the Lassies.

When she retired in 1953, she became a Physical Education teacher and Athletic Director.

A longtime Alameda resident Dorothy "Dottie" Stolze, who played seven seasons in the All-American Girls Professional Baseball League in the late 1940s and early 1950's, died Saturday, July 31, 2003. She was 80.

In 1946, Ms. Stolze was spotted by a scout for the AAGPBL, which was featured in the 1992 movie "A League of Their Own," while she was playing shortstop for an Alameda fast-pitch softball league. Within two weeks, she was playing the same position for the Muskegon (Mich.) Lassies.

A very versatile player, she was used at every position except pitcher during her stay in the AAGPBL, which ended in 1952 with the Peoria (Ill.) Redwings.

"I would have played for nothing," Ms. Stolze said not long ago. "In fact, I wish I was young and there was a league like that (again). I'd be in it right now."

After retiring from baseball, Ms. Stolze returned to the Bay Area, finished her education and went on to teach physical education and coach women's softball at DeAnza and Pinole Valley high schools from 1955 through 1991.

A passionate advocate of women's sports, Ms. Stolze received countless letters from school-age female athletes over the years, requesting her baseball cards and thanking her for paving the way for them in their athletic careers.

Ms. Stolze was a lifelong fan of a variety of sports, and was a fixture for many years at A's and Raiders games. She recently threw out the first ball at an A's game.

She is survived by her brother and a niece, both of Costa Mesa (Orange County).

Funeral arrangements are being handled by the Greer Mortuary in Alameda. The family suggests contributions in her name be made to the American Cancer Society, 1710 Webster St., Oakland, CA 94612.