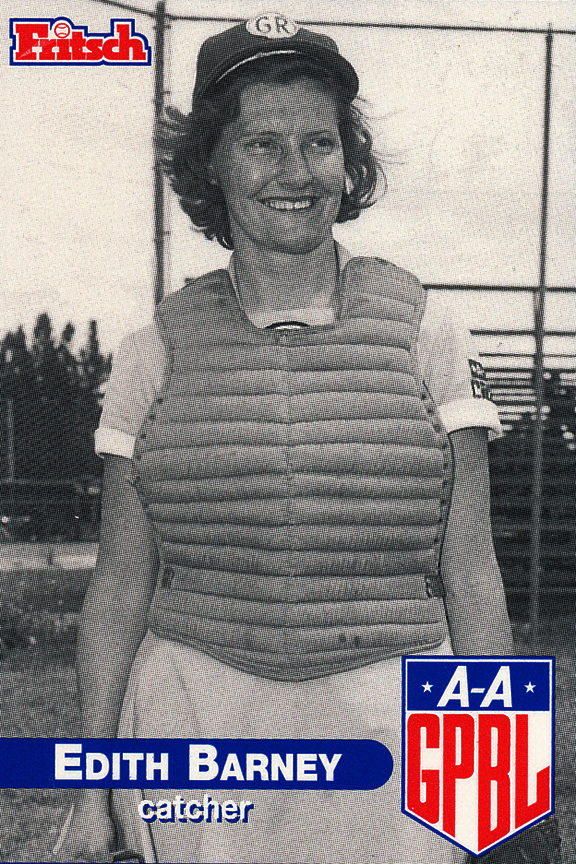 Edith “Little Red” Barney was a catcher who played in the AAGPBL during the 1948 season.

A native of Bridgeport, Connecticut, Edith attended Bassick High School, where she played basketball, soccer and softball.  She later participated in industrial league softball and basketball.

She entered the AAGPBL in 1948 with the Grand Rapids Chicks, managed by Johnny Rawlings.  The Chicks won the Eastern Division with a league-best record of 77-48, but were swept in the semi-final round by the Fort Wayne Daisies.  After her four-game career, Barney later worked for more than 36 years at Raybestos-Manhattan, Inc. in her native Bridgeport.

After retiring in 1985, she moved to North Port, FL and played golf and bowled and directed activites in her mobile home park.

Red retired as a Laboratory technician after 36 years of service with Raybestos Co. in Stratford, Conn. She moved to North Port in 1985 from Bridgeport. Red excelled in many sports, baseball, golf, bowling, etc. and she held many trophies. Red played baseball in the All American Girl's Professional Baseball League. Her team was the Grand Rapids Chicks. She was a member of Nu Pi Alpha Sorority in North Port and St. Paul's Presbyterian Church.

Arrangements were made in Port Charlotte, Fla.