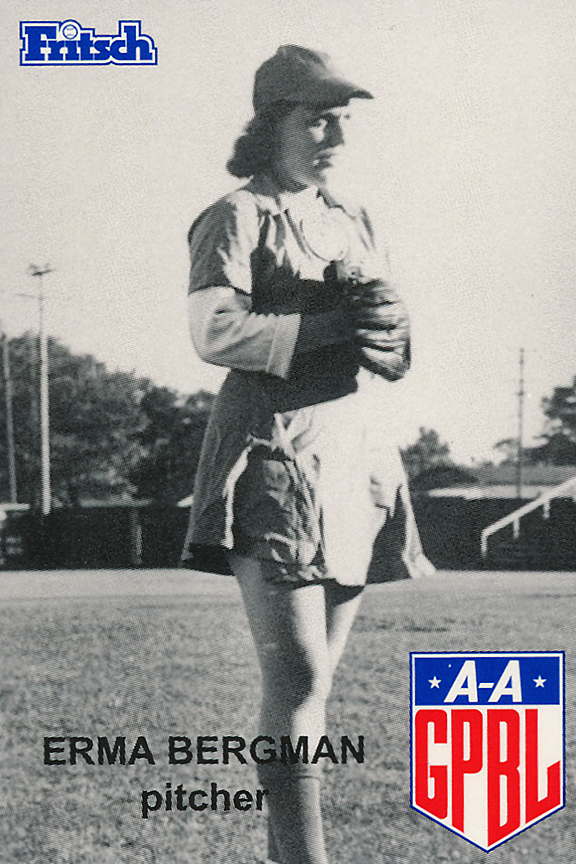 Erma was able to hit a home run against the Peaches in Rockford with her parents at the game. After starting as a third baseman , Erma moved to the mound where she became a very solid pitcher in the AAGPBL. She experienced enough league playoff races that made her very valuable to any team she played for in the league. She enjoys hockey,bowling and dancing. Erma became one of the first Commissioned Police Woman in St. Louis MO.    She retired in 1981 after 25 years of service..

Erma “Bergie” Bergmann pitched a no-hitter in 1947 in the women’s professional baseball league. She later served on the St. Louis Police Department’s decoy squad, and once shot a street-robbery suspect with her snub-nosed revolver.

“It was just like on the shooting range,” Ms. Bergmann explained to the Post-Dispatch in 1961. “I had a mental picture of the bull’s-eye and aimed for that.”

Ms. Bergmann, 91, died Sunday (Sept. 13, 2015) of infirmities at her home in the Boulevard Heights neighborhood of south St. Louis, where she had lived for about 60 years. For her 90th birthday in June 2014, she threw out the first pitch at a Cardinals’ game in Busch Stadium.

Ms. Bergmann grew up on the 1800 block of South Broadway in the Soulard neighborhood and graduated from McKinley High School. She was a scrappy athlete who learned baseball with her two brothers on a vacant lot near their home. Their father worked in a meat-packing plant.

She became a teenage standout in the women’s fast-pitch division of the St. Louis Amateur Softball League. Her talent drew notice from scouts of the All-American Girls Professional Baseball League, which Philip Wrigley, chewing-gum magnate and owner of the Chicago Cubs, founded in 1943 to maintain interest in baseball while so many male players were in uniform during World War II.

In 1946, Ms. Bergmann joined the Lassies of Muskegon, Mich., as a pitcher and outfielder. She soon was earning $75 a week, or nearly double the earnings of St. Louis area workers. She pitched a no-hitter for the Lassies against the Grand Rapids, Mich., Chicks on May 22, 1947.

In an interview in 1992, Ms. Bergmann said her mother and some of her local teammates tried to talk her out of joining the league.

“They said I would lose my amateur standing,” she recalled. “I told my mother, ‘Well, Mom, I’m going to try it and if I don’t do it, I’ll be right home.’”

Instead, she played for six seasons on four teams. “I was a poor kid that got the chance to play ball and travel — planes and trains. Lived in hotels, meals,” she recalled in 1992. “What more could you want?”

She also played for the Springfield, Ill., Sallies, the Racine, Wis., Belles and the Battle Creek, Mich., Belles through 1951. The league folded three years later.

In the off-season, she worked in St. Louis at Monsanto and McDonnell Aircraft. After her baseball career, Ms. Bergmann worked downtown at City Hall as a clerk until she was hired as a police officer in 1956. At the time, the city department had few female officers, having granted them full arrest powers only five years before.

In 1961, she was assigned to the Deployment Squad and frequently walked alone on sidewalks in rough neighborhoods in civilian clothing as a decoy for the unit. She was responding to a fellow officer’s aid call when she shot and wounded a suspect in 1961 just west of downtown. Her sergeant praised her quick response and accurate shooting.

Proficient in judo, she occasionally demonstrated the martial skill at the Police Academy.

In 1988, the Baseball Hall of Fame in Cooperstown, N.Y., included her picture, ball glove and one of her team contracts in a permanent exhibit on women in baseball. She was inducted into the Missouri Sports Hall of Fame in 2007.

She had no immediate survivors.