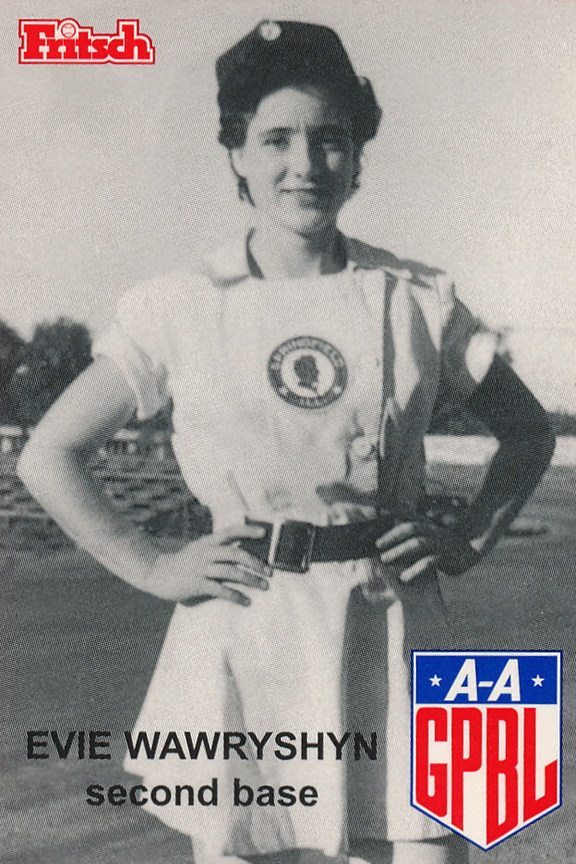 My early recollections are not thorough because I was quite a "tomboy,, as they called it back then.  My girl friends were quite limited in what they were permitted to do, and we lived in the country and families were spread out so there were no close neighbors.

I had three brothers.  Archie, the older brother, always let me play ball with him.  I believe he is responsible for implanting the love for this pastime.  I found an Indian ruhfr ball (that's what they called it in Canada then).  I spent hours throwing it against our house and catching it on the rebound, usually grounders.

The structured play began when I attended public school in the 5th grade.  It was a small school and didn't have many boys.  When they got together to play baseball, my brother would say, "Let Evie play first or short stop.  Then I could get up and bat the ball in the line up.

In 1945, I was playing for a women's softball club in  Winnipeg, Manitoba called the Canadian Ukraine Athletic Club.  At one of our games, unknow to me, there was an All-American Girls Professional Baseball Scout in the stands.  At the conclusion of the game, the Scoutr stopped me and asked if I wanted to go to the States to play ball for money.  I didn't believe him and dismissed the incident as an impossible offer.

The following year, 1946, I was teaching school at a small mining town in Manitoba when the offer came again by telegram.  I believe Destiny played its hand.  I attended Spring Training and was assigned to play for the Kenosha, Wisconsin Comets.   My favorite position was second base.

That was the start of a six year history in the AAGPBL.  My favorite manager was Carson Bigee who gave me the chance to play each and every game.  Later,  Max Carey was instrumental in my final year with the Fort Wayne Daisies.

I had the pleasure, honor, and good fortune to have been chosen to play on three All-Star Teams.  The first was with the Springfield Sallies in 1948.  The second and third were both with the Fort Wayne Daisies in 1949 and 1950.

I played ice hockey in the off season.

I was inducted into the Manitoba Sports Hall of Fame in 1992.

At 97 years young, our dear mom left to join loved ones that have gone before her.

She will be sadly missed by her five daughters and one son, her eleven grandchildren and seven great-grandchildren.

Mom was born in Tyndall, Manitoba. She excelled in all sports, particularly hockey and baseball.

Mom loved music and always had a song in her heart.   She had the unique ability to make each person she met feel special, loved, and listened to.  Mom's strength of character came from her deep devotion to God, and she lived her life as a testament to her faith.  Mom's vibrant personality and love of adventure lasted throughout her life.  Words cannot express how much she will be missed.

Our heartfelt thanks to Dr. Duerksen for his wonderful care as well as the compassionate nurses who visited Mom each morning.

A private family funeral will be held on Thursday, February 10 at 11:00 a.m.  Live streaming of the service was available.

The family will be hosting a Celebration of Life in the future.