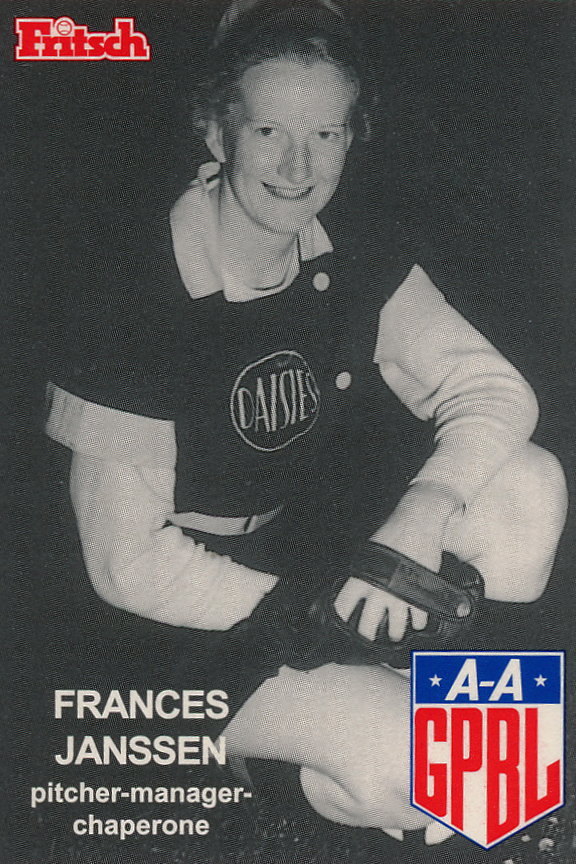 Excerpts from Article: "Janssen, Fran: Playing for the Rookie Tour and the All-American League"By Jim Sargent

Hoosier Frances "Fran" Janssen was not among the best-known players of the All-American Girls Professional Baseball League (AAGPBL). But she made the league in 1948, was released by the Grand Rapids Chicks in mid-season, and invited to rejoin the All-American (as the league was often called) the following year. Pitching for several teams, she played into the 1952 season.

But in 1949 Janssen became part of the league's innovation to recruit new players (which was repeated in 1950): two teams of "rookies" would travel together over much of the eastern half of the United States playing exhibitions against each other.

As Fran explained in a letter for fans who ask what it was like to be in the league, "First of all, it was great fun and a chance to meet lots of nice people, many who are still friends. It was also an opportunity to see some of the United States."

Regarding the rookie teams who made the tour: "It was intended to develop new players and also show the country the All-American Girls League. We traveled more than 10,000 miles in 1949 from Illinois to Texas, across the Gulf states and up to New Jersey and Pennsylvania. We played in minor league parks in Tulsa and Baltimore, as well as in city parks, and we drew good crowds. We rarely spent more than two nights in a town. We had to make fast trips to the laundromats and often had to sleep on the bus."

Fran pitched well enough on the tour to earn another shot at the All-American League. She completed the 1950 season with the Fort Wayne Daisies, a team where she already had friends. Her club played for the AAGPBL championship against the perennial champion Rockford Peaches, but the Peaches won in seven games.

Fran, a 5'11" redhead who learned to pitch in her rookie season, was an excellent all-around athlete whose best sports may have been basketball and volleyball. Her lifetime record during four AAGPBL seasons was not exceptional: 13-18 with a 3.41 ERA in 80 games. Later, she played on national championship basketball and volleyball teams, and she still golfs.

Born on January 25, 1926, Fran was the daughter of Fred Janssen and Anna Petersen. Her father passed away when she was four, and a few years later her mother married Diedrich Ubbinga. Fran grew up on the family farm near the small town of Remington, Indiana, where her high school class of 1943 had ten graduates.

At that time Indiana offered no interscholastic sports for girls. But at Gilboa Township School, not far from Remington, Janssen was an excellent student who thrived at sports. For example, each spring Fran and her friends would play a fast-pitch softball game against the town team.

After graduation Fran moved to Fort Wayne to attend International Business College and study accounting. She lived in a private home, helping with housework in return for room and board and a couple of dollars for spending money. Graduating in a year and a half, she played industrial league basketball in the winter--first for the Lincoln National Life Insurance team--and fast-pitch softball in the summer.

In 1945, when the Daisies (formerly the Millerettes) moved to Fort Wayne from Minneapolis, Fran got to know a few players. They encouraged her to try out.

Fran went to an AAGPBL tryout in 1946 but decided not to compete. Finally, with her interest renewed after watching many AAGPBL games, she tried out in the spring of 1948. Performing well, she was selected to go to the league's 10-team spring training camp at a former naval air base in Opa-Locka, Florida, just outside Miami.

Janssen was assigned to the South Bend Blue Sox, and she played with them for three days, pitching her first game. The league was sending South Bend and another team to Cuba for exhibition games. Before that trip, an allocation meeting was held to shift players--a method then used to make the league more competitive. Fran was assigned to the Grand Rapids Chicks.

Janssen played half a season with Grand Rapids. She pitched 11 games and compiled a 4-4 record with a 3.98 ERA in 61 innings. She also hit .250 (5-for-20), collecting five singles and batting in four runs. Evidently the Chicks had plenty of good pitchers, because Fran was released in July. Returning to Fort Wayne, she went back to work.

The 1948 season saw the All-American League switch to overhand pitching, use the same 11-inch baseball that was used in 1947, and expand from eight to ten teams.

But the expansion teams didn't fare well. With the league split into five-team Eastern and Western Divisions, the Springfield, Illinois, Sallies finished last in the East with a 41-84 record, while Chicago Colleens placed last in the West with a 47-76 ledger.

For 1949, however, the All-American created two rookie teams which were evenly matched. At that point Janssen's career resumed, as she was recruited to pitch for the Colleens. They trained in Chicago before leaving on the cross-country tour.

Fran figures they played 72 games, with each team winning 36. The teams traveled through 20 states and played in 46 cities. Since the league counted the whole tour as exhibition games, no statistics were kept.

The tour began with an exhibition in Peru, Indiana, on June 10, and continued through September 5.

Personable, witty, and friendly, Janssen was asked to switch to the Sallies and serve as playing manager as well as chaperon. The switch came while the teams were staying at Austin, Texas. She handled both jobs while also leading her team in pitching.

For Fran, who was twenty-three and one of the oldest girls on either team, one memorable highlight occurred on August 8. With more than 3,700 baseball fans filling Maher Field in Roanoke, Virginia, for an eight o'clock tilt, Janssen earned the win as her team outlasted the Colleens, 8-3. Fran gave up seven hits and fanned seven, and the Sallies scored all eight runs in the first three innings. The redhead got aboard via an error in the second and contributed a run to her team's cause.

Bob McLelland of the Roanoke World News interviewed several of the girls that evening, and the next day they toured Natural Bridge, 35 miles north of Roanoke.

McLelland, noting the ages of the girls ranged from fifteen to twenty-three, found that the players had to follow strict rules: "They can't drink or smoke and they are on a constant training menu. They have a bed-check two hours after their game is over. That is, as one lovely lassie put it, two hours after the game and not after they get dressed."

Also, the girls stayed in some of the best hotels in every city where they stopped. Fran created a cover for her scrapbook of those years, and the cover includes letterheads from hotels such as the Admiral Semmes in Mobile, Alabama ("completely air conditioned") the Stephen F. Austin in Austin, Texas, and the Ponce de Leon in Roanoke ("individual baths, circulating ice water, and electric fans").

Many girls who played on the tour later made the AAGPBL. The tour succeeded, and the league repeated it in 1950.

Despite her good start in 1949, however, Janssen played for several teams over the next three seasons. She started 1950 with the Peoria Redwings, but midway through the season she was traded to the Fort Wayne Daisies, then her favorite team.

Fran helped the Daisies win the regular-season pennant and make the final round of playoffs against the Rockford Peaches. Her record was 3-3, and she won Fort Wayne's final game of the season, a 6-4 victory over South Bend in a double-header split on September 4, 1950.

However, in the finale of the AAGPBL Championship Series on September 18, Rockford romped in the seventh game, 11-0. Fort Wayne hurlers Millie Deegan, Dottie Collins, and Janssen could not stop the Peaches. Each team collected 11 hits, but Rockford's Nicky Fox stranded 10 Daisy baserunners.

Janssen started 1951 with Fort Wayne, but by the season's end she had been traded three times: to Peoria, to the Battle Creek (formerly Racine) Belles, and finally to the Kalamazoo Lassies. She finished the year with a 6-10 record and a 2.67 ERA, but she couldn't find a permanent league home.

In 1952 Fran hurled five games (she was 0-1) for Battle Creek, but she was released. By that time the league had dwindled to six teams: South Bend, which won AAGPBL Playoff Championships in 1951 and 1952, as well as Fort Wayne, Rockford, Grand Rapids, Kalamazoo, and Battle Creek.

The early 1950s witnessed a general decline in attendance both in the All-American League and in Major League Baseball. The decline was due in part to the growing popularity of television. But many Americans were finding other ways to spend free time, including do-it-yourself sports like softball, tennis, badminton, and golf.

After leaving the league in 1952, Janssen continued her lifelong interest in sports while working at various office clerical positions. For example, she moved to South Bend in 1955 and played center for the Rockettes. Playing under standard boys' rules (that is, full court basketball), her team played a schedule of 20 games a year and won five national championships in the Women's Basketball Association. Further, she played volleyball, helping South Bend's Turner team win the national championship in 1966. She also learned to golf, and she still likes golfing.

Today Fran enjoys promoting the All-American League. Also, she is active in the Players Association and attends the biennial reunions. She also helps catalog AAGPBL materials for the league's archives at the Northern Indiana Center for History in South Bend.

If she had it to do again, the Hoosier athlete might have joined the All-American a little sooner. Her only regret is that her managers did not spend more time teaching her to pitch. On the other hand, Fran Janssen treasures the experience of making new friends and being an All-American, which provided the most unique and exciting time in her life.

Born Jan. 25, 1926, in Remington to the late Fred B. and Anna Petersen Janssen, she was a 1943 graduate of Gilboa High School. Miss Janssen played in the All-American Girls Professional Baseball League from 1948 to 1952. She also was a center for the South Bend Rockettes basketball team from 1954 to 1960. She received an associate degree in business from South Bend IUPUI and attended the International Business College of Fort Wayne.

She was an insurance representative for Laven Insurance Co. in South Bend (IN) for many years and was a member of Northern Indiana History Center in South Bend.

Survivors include four sisters, and she was preceded in death by a brother.