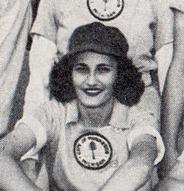 By That Mary "Bonnie" Baker was Genevieve's sister.

McFaul—Genevieve “Gene” Mary McFaul (nee: George), born September 22, 1927 in Regina, Saskatchewan and passed away March 11, 2002 in Saskatoon, Saskatchewan. Gene passed away peacefully at St. Paul’s Hospital, Saskatoon. With her in her final moments were her loving sons.

Gene was the youngest of a family of nine born to Michael George and Elizabeth (nee Lorens) originally of Hungary. Of her sisters and brothers, she was survived by a sister and two brothers. Gene was predeceased by her husband, James McFaul as well as her remaining sisters and brothers. Gene was lovingly remembered by immediate and extended family, and grandchildren.

Gene was born in Regina in 1927. As the “Baby” in the family, Gene was the last to arrive at the ball diamond, starting her organized softball career at age 13. Athletics, particularly baseball, would shape much of her life. In 1947 she was drafted by the AAGPBL (All-American Girls Professional Baseball League) and played one year for the South Bend, Indiana Blue Sox. In that year she made an unassisted triple play. Gene returned to Regina and continued to play softball in the W.C.S.A. until the mid-1950s, culminating in a world championship appearance.

In 1951 Gene married James McFaul, an athlete in his own right. Gene’s husband played for the Saskatchewan Roughriders until 1952. Their life together involved them in sports in the Saskatchewan communities in which they lived.

As a recreation director with the Department of Culture and Youth, Jim’s job took Gene and family from Regina to North Battleford and Swift Current. In these communities both Gene and Jim were active in playing and developing sport especially softball, curling, football, and hockey.

In 1991 Gene was one of 21 women inducted into the Saskatchewan Baseball Hall of Fame, having been one of the 250 players included in the Baseball Hall of Fame AAGPBL Roster in Cooperstown, N.Y. in 1988. As a member of this select group, Genevieve Mary McFaul “Gene” was one of a kind—ask her family or any of the countless friends touched by Gene; She was “In a League of her Own.”