Gert played i nYankee Stadium in 1950 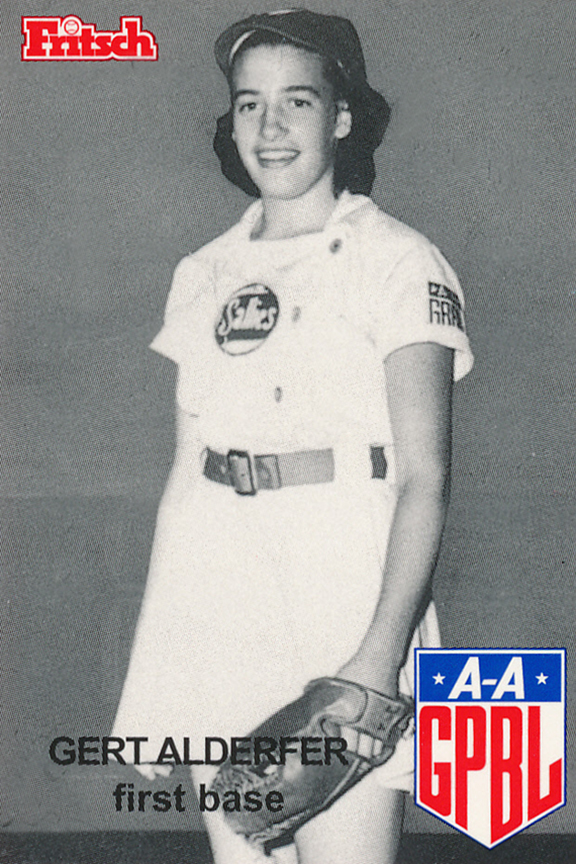 Gert played i nYankee Stadium in 1950

By Gert played i nYankee Stadium in 1950

Although Gert only spent 1950 in the league playing in less than 10 games for Kalamazoo, she had the opportunity to play in two of the traveling tours.  In 1949 she toured with the Springfield Sallies and in 1950 with the Chicago Colleens.

The highlight for her was playing in a three inning exhibition game at Yankee Stadium in August, 1950.

An all-round athlete, she also excelled in basketball, softball, and hockey.

Benner, Gertrude (9/21/1931 - 2/27/2018)
By Karen Britton
Gertrude Benner, 86, of East Greenville, PA, passed away peacefully surrounded by her beloved family on February 27, 2018. She was the wife of the late Harold L. Benner who passed away last March. Born on September 21, 1931, she was a daughter of the late Henry and Sallie Mae (Buchenauer) Alderfer of Telford.

‘Gert’ was a 1949 graduate of Sell Perk High where she was a scholar athlete who excelled in Softball, Basketball, and Field Hockey. Immediately after graduation, she embarked on a professional baseball career playing for the Springfield Sallies, Chicago Colleens, and Muskegon Lassies of the All-American Girls Professional Baseball League in 1949 and 1950. She declined her option to continue with the Lassies in 1951 but continued to play semi-pro baseball locally for the Nifties. Gert was enshrined in the Baseball Hall of Fame in Cooperstown in 1988 with her fellow players. She was also inducted into the Pennridge-Quakertown Sports Hall of Fame.

She married Harold Benner in 1955 and raised two daugters and a son. They gave her eight grandchildren. She has two a brother and a sister living in Sellersville. Along with her parents and husband, she was predeceased by three brothers.

A celebration of her life was held at 12:30 PM on March 10 in her church, St. John’s Lutheran Church, 910 Allentown Rd., Sellersville, PA 18960. All were invited to gather with the family from 11:00 AM until the service began. She was interred with her husband in the church cemetery.

In lieu of flowers, contributions may be made in her memory to the American Cancer Society, 1626 Locust St., Philadelphia, PA 19103. Visit her “Book of Memories” at falkfuneralhomes.com.