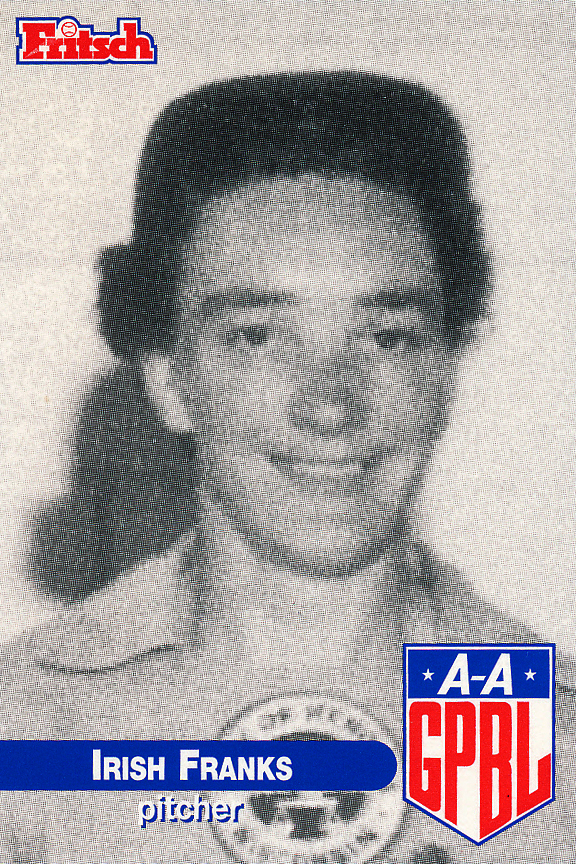 Her nickname was Irish and she was a right handed pitcher who has a good change up. She was also good at the plate and played some outfield. She was in the Army as a WAC where she repaired planes overseas in England and France with the 8th Airforce. Irish played basketball in the off-season.

Hermina Ann Franks passed away Wednesday, April 7, 2010. Hermina was born in Oconto, WI on September 7, 1914 to the late Albert and Annie (Tiedke) Franks. Hermina was never married and was a member of Holy Trinity Parish.

Hermina (“Irish”) Franks grew up in Oconto and attended the former Jefferson grade school and Oconto High School. During her school years in Oconto, she played softball and baseball until her graduation in 1933. After graduation, she attended the Northland School of Aviation in Minneapolis, Minnesota receiving her aircraft mechanics certification in 1934. During the middle 30's, while working for the Bond Pickle Company in Oconto, Wisconsin, she organized the company’s first girl softball team sponsored by one of the owners, Truman Bond. For several years the team played in the Fox Valley League prior to Hermina’s departure to Boston, MA. In Boston she played on the Boston girls’ softball teams and played in the Boston Garden. She went on to work at Lack Heaven Aircraft plant in Pennsylvania prior to enlisting in the army/air force in 1942. She spent 3 ½ years in the military of which 1 ½ was overseas. While in the service, she also played baseball. She left the service in 1945 and shortly after tried out for the All-American Girls Baseball League and was chosen to play on the Kenosha Comets team in Kenosha, WI. Hermina was recognized by the National Baseball Hall of Fame in Cooperstown, NY in 1998. Hermina played professional softball for two years prior to leaving the game to work for Abbotts Laboratories in North Chicago. While working for Abbotts, Hermina once again played softball in local leagues. She worked for Abbotts for approximately 22 years before retiring to Oconto where her roots began. For a number of years she did volunteer work at the Riverside Nursing Home and when she finally decided to fully retire, she spent much of her time outdoors. In the winter season Hermina could be found cross country skiing well into her 80's. She was a member of the Women of the Moose Chapter 311.

Hermina is survived by many nieces and nephews, special friends Vicki Berceau, Ilah Bancroft and a little girl named Serenity. She was preceded in death by four sisters and six brothers.