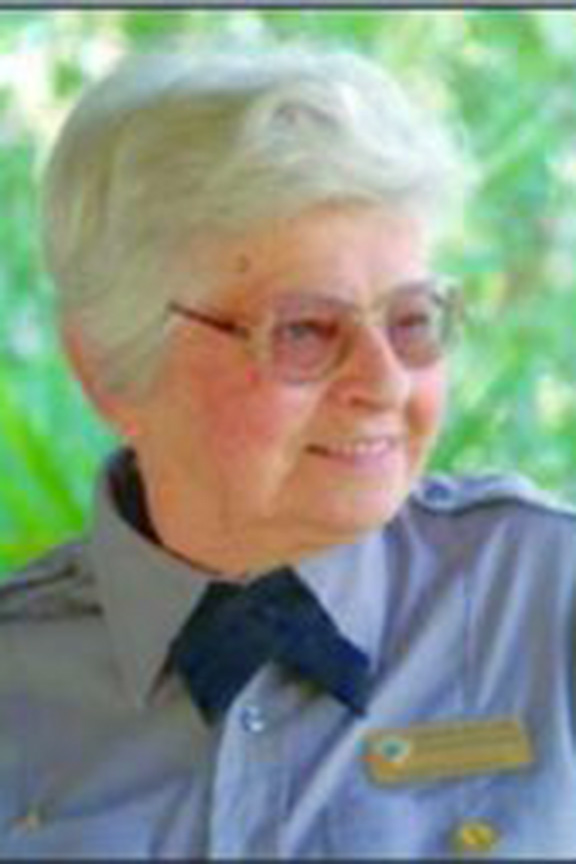 The June 13, 1949 Racine Journal Times (WI) reported that Irene had reported to the Belles.  She was originally assigned to the team in March, but, being a teacher, she didn't report until the close of school in June.  Irene's career with the Belles was short as the June 22, 1949 Times reported she had been released by the team after pitching two innings in an exhibition game against Kenosha. She may not have played in a regular season game.

On Friday [11/2/2012], the one-time ambassador for Florida State Parks was lauded and applauded for her years of tireless volunteer service. Irene DeLaby died Oct. 6 [2012]. She was 90.

“What a life she had,” said the director of Florida state parks. “She was a dedicated and enthusiastic volunteer for the Florida Parks Service, traveling the state encouraging and supporting volunteers.”

DeLaby volunteered more than 27,000 hours to the park system that she loved, and was the first Florida parks volunteer to contribute 10,000 hours, which was recognized by the governor.

In 2000 she received a national volunteer service award and in 2004 was awarded the national Take Pride in America award for volunteerism.

“In 1992 when Hurricane Andrew hit, it looked like we were going to have to close 35 parks,” said a former director of the Florida state park system. “Irene was instrumental in forming the first-ever Friends of Florida State Parks. It was that group that moved us forward to become gold medal award winners twice.”

A park's director said DeLaby would stand on the steps of the Capitol in Tallahassee in her park service uniform and advocate for the parks.

“She often said, “If you’re going through hard times or need a place to sit quietly, go to a state park and be re-created,” Forgione said. “Irene was an outdoors person.”

Born in Chicago [Aug. 12, 1922], she loved everything about being outdoors. She was an avid skier and snowmobiler, she raced dogsleds and organized cross-country ski competitions. She canoed and kayaked, fished and camped.

“Her other passion was wolves,” a park director said. “She volunteered many hours at the International Wolf Center in Ely, Minn.”

During the 1940s, DeLaby played professional baseball for the All American Girls Professional Baseball League. During World War II she worked in a defense plant. Later, she went on to teach high school in Fox Lake, Ill.

She moved to Florida in 1989 with her best friend of 60 years.  Almost immediately, DeLaby began volunteering for the parks, beginning at Fort Cooper State Park. She had visited there and saw that there wasn’t a “face” to greet visitors, so she decided she would be the face.

“The first time I met Irene was when she was president of Friends of Fort Cooper, and there was some issue going on,” recalled a former park ranger at Homosassa Springs Wildlife State Park. “I went to a public meeting where she was speaking and I remember thinking, ‘This is a strong lady.’ She had great leadership, and I was very impressed.”

The ranger said when he found out she lived on the west side of the county in Homosassa, he and others at the wildlife park “stole” her from Fort Cooper and she got involved there.

“She was a dynamite lady and the consummate advocate for volunteers in trying to be a champion for volunteers,” he said. “She was very much a leader at a time when there weren’t a lot of women in leadership.”

The current park ranger at the wildlife park, noted that DeLaby loved the annual Celebration of Lights in December. When he mentioned how when he first got to the park in 1997 and she made it a point to tell him “how it’s done,” everyone present who knew DeLaby laughed.

She knew how to do things, and most often the best way was her way, but only because she cared deeply about the parks and the people. Above all, Irene DeLaby cared about people.

She was determined and formidable, loving and spunky. She was fearless and believed in speaking her mind. She was an encourager, a coach, a cheerleader. For many years she wrote a regular monthly column for the Chronicle, encouraging people to visit her beloved state parks and to volunteer, volunteer, volunteer.

“Irene lived in a lot of (back) pain, but she wouldn’t let it stop her,” said th, historic resources administrator with the parks system. “In her own words, in one of her volunteer newsletters she wrote, ‘Age is not the final measure of what we accomplish in life. Changes in physical ability just become new challenges to complete goals.”