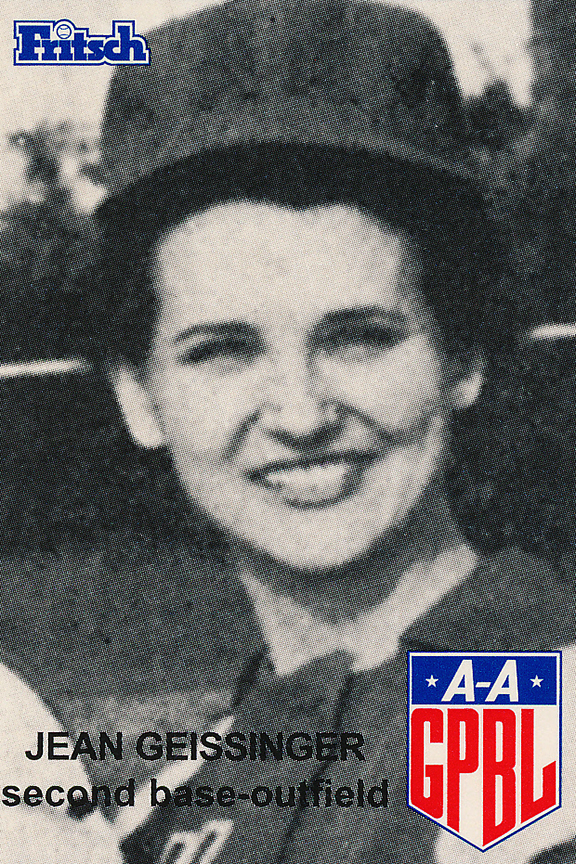 Jean was considered the greatest second baseman in the league. Not only was a graceful fielder but she was also a heavy hitter, hitting close to .300. Jean hit a booming homerun her very first time up in the league. Not many runners were left on when Jean came to the plate.  In the off-season Jean enjoyed roller skating and entertained the idea of skating in the roller derby. An All-Star, she continued to play with Allington's All-Stars after the league folded. This was a barn storming team that traveled the country playing games. Jean married and moved to Coldwater , Michigan where she had a family and continued to play fast pitch softball at a high level. On a personal note, this Associate Member, had the chance to play against her when she was about forty. She was a great fielding shortstop and a hitter to be feared.  * In 1953 Jean led the League in triples and runs batted in. Plus,she tied Eleanor Callow of Rockford for home runs.

KALAMAZOO — Jean Louise Harding, 79, of Coldwater, passed away on June 8, 2014 at Borgess Medical Center in Kalamazoo while surrounded by family.

Jean was born June 25, 1934 in Huntingdon, Pennsylvania to Richard and Lillian (Fagan) Geissinger. She was a true sportswoman. Jean played baseball in the All American Girls Professional Baseball League where she was known as “Dutch.” While playing baseball, she met her future husband, Russell “Blaine” Harding. They were married on April 25, 1959 at the United Methodist Church in Fremont, Indiana. Jean worked at the Branch Intermediate School District as a Paraprofessional, where she proudly worked with special needs children for many years.

Jean was a loving, family first wife, mother, grandmother and great-grandmother. She lived a very active life, playing sports into her 50’s with her children. After baseball ending, she took up fast-pitch softball and was known as “Dudley.” Eventually she conceded, and played slow-pitch. When not playing, Jean stayed involved by coaching or umpiring games. Jean has been inducted into the Michigan, Indiana, and Pennsylvania Halls of Fame and is an honored member of the National Baseball Hall of Fame in Cooperstown, New York.

Mrs. Harding had many interests outside of sports. She enjoyed walking, playing golf, and reading. Jean also enjoyed the outdoors, spending time watching wildlife in her backyard and bird-watching. She was known as a loyal, proud, and generous person who could be feisty at times.

Memorials may be directed to the Special Olympics. www.dutcherfh.com