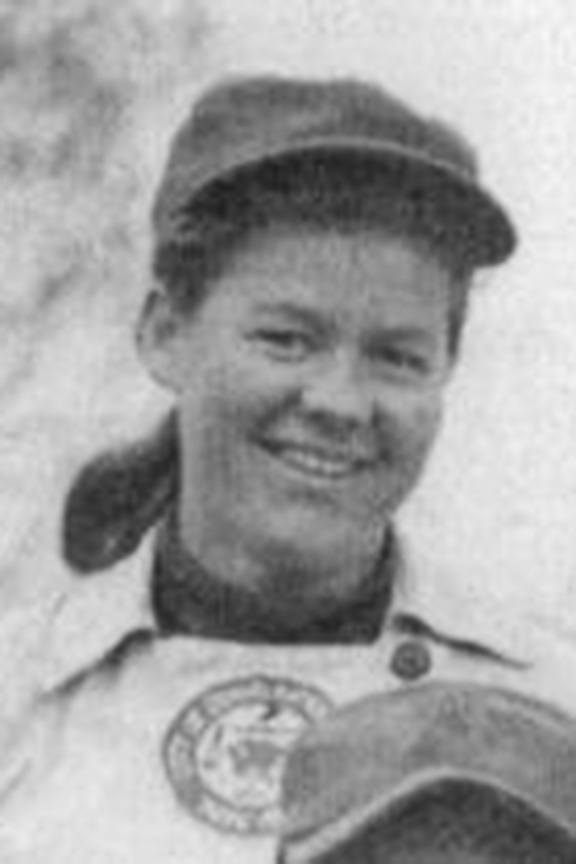 Some Beautiful Words From Her Family

Joan (Tysver) Chiancola [died] on December 20th 1992 [and] as her husband of 40 years, we shared a wonderful life together.  She was a remarkable woman, a loving wife, and devoted to her children and grandchildren.  Joan was very proud to have played two seasons in the AAGPBL.  One season with the Grand Rapids Chicks and the 2nd season with the Rockford Peaches.  She was a southpaw.  And may I add, she enjoyed the movie “a League of Their Own” very much, viewing it with me and a second time with her grandchildren.  It brought back wonderful memories of her playing days, and she beamed with happiness.  She was 61 years of age.  Too young to die but she will live in my heart forever.”

Mom was born at home in Gloucester, in 1931.  In the summer she would swim in the pond on their land and in the winter she would ice skate.  She loved to ride horse back.  But, she really loved to play baseball.  She heard scouts would be in Lynn looking for players for the All-American Girls Professional Baseball League.  She made the league.  She traveled around the Midwest playing baseball, doing what she loved, and on top of that, she was paid fifty-five dollars a week!  She played professionally for two years, before, as she said, she ate herself out of the league.  Later she discovered another team wanted to pick up her contract, but fate has a way of intervening.  Instead, she started studies at the Chandler School in Boston, and it was during her train commute that she met our father.  When Mom found out she had cancer, she didn’t give up.  She just lived faster.  She traveled all over the states, visiting relatives, going to her nephew’s hockey games, getting everything in that she could.  She and Dad went to Europe last year, another trip she wanted to make.  When the movie “A League of Their Own” was released, we all went to see it together and she was able to enjoy that special time in her life once again.  It was a gift to know her, a gift to love her, and the greatest gift to be loved by her.  We love you Mom.

I’m not here today so much to mourn her death but more so to celebrate her life.  The life of a woman who was a great power of example to all who knew her.  A woman that nourished me and taught me right from wrong.  She gave me values to live by that made my life a beautiful experience.

A woman who gave me unconditional love so that I

could love in return.

A woman who gave herself for others so that I

could be thoughtful of others.

A woman whose generosity made it a joy for me

A woman who cared for her family and put their

interest before her own.

A woman whose spirit will forever be a guiding

light to all who knew her.

A woman for whom I will hold fond memories close

A woman I am proud to call Mom.