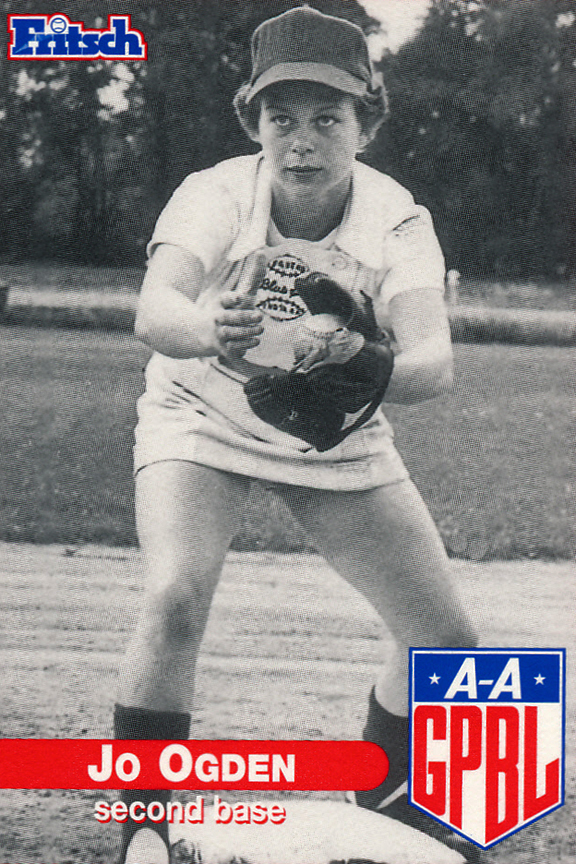 Joanne was twenty years old when she played second base for the South Bend Blue Sox. She had read an article in the local Rochester paper about the AAGPBL looking for recruits. She remembered seeing an entire photography section about the league and the players. She especially remembered a picture of Jean Faut with Karl Winch, her manager and husband and their son.

She read everything she could about the league and then decided to write the South Bend Blue Sox organization. She got an answer within the week and was given a tryout. At the time, Joanne was working at Eastman Kodak and playing softball for the Van Grafflins TNT's, in an independent league. She was also playing in a tri-city league. Eastman Kodak gave her time off to attend the tryouts and told her that her job would be waiting if she didn't make the team! Joanne had been playing softball since she was ten years old, but she loved hardball and played with the boys every chance she could get. "I was very fortunate to join such a super team." she said.

Joanne recalled one of her favorite moments as a South Bend Blue Sox playing one day against the Fort Wayne Daisies, "I was put in as a rookie at second base for the first time behind the pitching of Jean Faut, one of the best pitchers in the league. Being on her team, well, I was so nervous and excited but as the game began, I was able to settle down. Then, the next game, when Ft. Wayne came to South Bend, I hit four for four, a perfect night at the plate!" Joanne also remembered with fondness that Betty Wagoner's mother, Mrs. Wagoner, was her chaperone and Mary Fronig was her roommate." There was a great comraderie among the player," said Joanne.

One of her regrets about the league is that she could never bring herself to go up to Dottie Schroeder, one of her idols, and ask for an autograph. Another brief story Joanne tells shows her great respect for the league's high caliber of play. It seems that during one game, she found herself on third base. At the crack of the bat she ran for home. The ball skipped through the infield to the centerfielder who scooped it up and with a perfect throw threw Joanne out at home plate. "Wow!" said Joanne, "Did she nail that throw! It was all such a great experience."

In 1954, Joanne was sent a contract but New York University at Rockport offered her an assistant counselor job with pay and credits. It was an offer she couldn't turn down. She would have loved to play again but did not return for the 1954 season. At college, she recalled being treated as a celebrity for having played professional baseball. She graduated and taught Health, Physical Education, and Science for grades 8-12 and retired thirty years later.

"The movie, 'A League of Their Own,' made a big difference," said Joanne. " I cried when the movie came out. I said, 'I did that!' I was in awe." Ever since the movie, Joanne has had fan mail from all over the U S and Canada. She truly appreciates her fans and recalled a recent letter from a fan named Kristi McQuowen. Kristi teaches fifth grade Science in Williamsport, Pennsylvania. Once a year, she teaches a power-learning class about the AAGPBL for her students that focuses on the accomplishments of the gals in the AAGPBL and its place in history. Joanne encourages today's youth to be true to themselves.  She said, "So often young people let opportunities pass by. If we just did them, our experiences would be more complete.  The more we experience, the more we grow. Have no regrets. Say I've done that!"

Joanne feels it is important for all young adults to take decision-making about their lives very seriously. She concluded, "It is important to decide who you are and where you are going. There is so much talent out there. Coaches should remember their players need help in making good choices. The most rebellious students usually want and need that guidance."