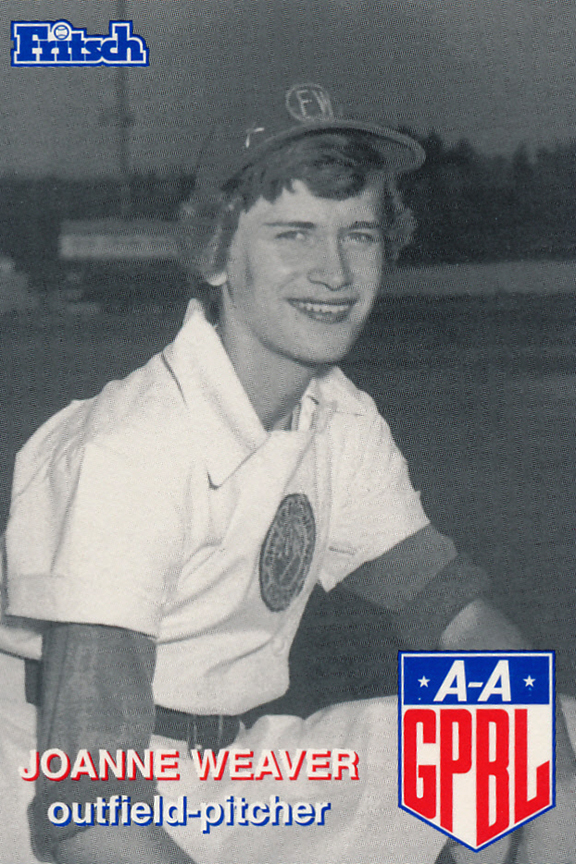 Jo Weaver was a hard hitting centerfielder and won several batting titles while playing. Jo and her sister Betty Foss were two great hitters in the AAGPBL and they were both All-Stars. Jo's other sister was Jean Weaver.   Jo was named "Player of the Year in 1954, with a Batting Average

An outfielder for the Fort Wayne Daisies, "Joltin' Jo Weaver" is remembered as one of the superstars during the final years of the All-American Girls Professional Baseball League (AAGPBL).

Raised in downstate Illinois, she was part of a noted athletic family.  After playing in a Chicago men's softball league in her teens, Joanne signed with the Ft. Wayne Daisies in 1951 where she and her sisters Betty and Jean helped the team to four playoff appearances, though a league title eluded them.

Joanne made the first of her three All-Star appearances and collected the first of three straight league batting crowns in 1952, then in 1954 established league records with a .429 batting average and 29 home runs while capturing Player of the Year honors. Her .359 lifetime batting average is the circuit's best.

After the AAGPBL folded in 1954, she spent some years with Allington's All-Americans, a barnstorming girls' team made up of other stellar AAGPBL players, and she also played in some men's leagues.  After residing in Ft. Wayne for 30 years, she returned home where she died of Lou Gehrig's Disease March 19, 2000 , ironically the same affliction which had earlier claimed her sister Betty. Joanne was part of the 1988 recognition of the AAGPBL and its players when Cooperstown's Baseball Hall of Fame. established the Women in Baseball exhibit.  The league's story is told in the 1992 film "A League of Their Own."