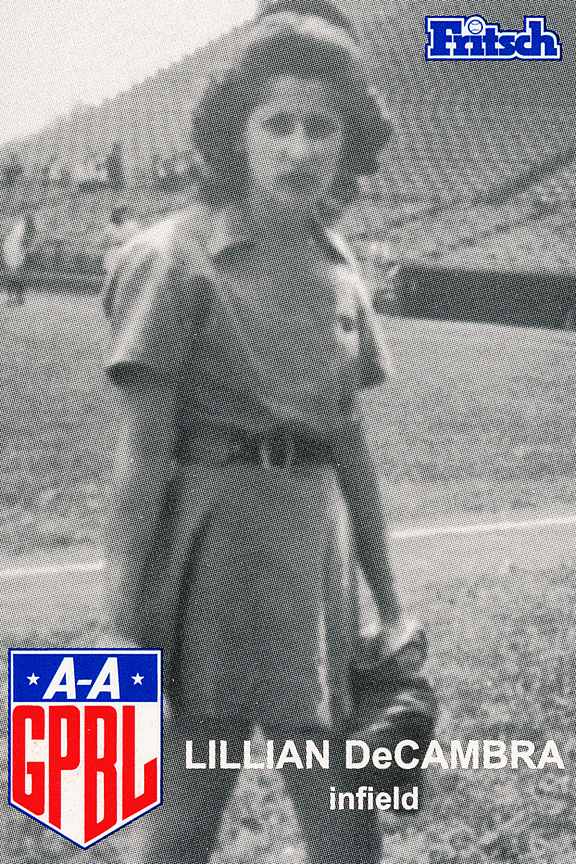 Lillian was a utility player for the Fort Wayne Daisies at spring training in Havana, Cuba. She played during the bus tour through the South on the way North prior to opening day in 1947. Her stats are unavailable. Lillian's sister Alice DeCambra played in the AAGPBL also.

Lillian J. (DeCambra) Kelley, 77, of Somerset, MA, a player in the famed All-American Girls Professional Baseball League, died Oct. 10, 2003, at home. She was the wife of the late Wheat E. Kelley. Born in Somerset, Nov. 21, 1925, daughter of the late William and the late Antonia (Charves) DeCambra, she lived in Somerset all her life.

Before her marriage, she played one summer in the All-American Girls Professional Baseball League as an infielder.

Her Larry Fritsch official baseball card of the AAGPBL states that she was a utility player for the Fort Wayne Daisies at spring training in Havana, Cuba. She played during the bus tour through the South on the way North prior to opening day in 1947.

After her year of baseball, she returned home to marry and raise a family.

The league was the brainchild of former Chicago Cubs owner Philip Wrigley and women competed from 1943 to 1954. The league kept baseball a national pastime during World War II when men were away at war and postponement of Major League Baseball was imminent.

The league was nearly forgotten until 1988, when the names of all the women who played professional baseball for the AAGPBL, including Mrs. Kelley, were engraved on a plaque that hangs in the Baseball Hall of Fame in Cooperstown, N.Y.

The league was highlighted in the 1992 movie A League of Their Own featuring Gina Davis, Madonna, Rosie O'Donnell, Lori Petty and Tom Hanks. The movie was directed by Penny Marshall and showed the women players trying out, dealing with new experiences, and competing for the championship.

She was a member of St. Patrick's Parish in Somerset for many years.

She was survived by a son, two daughters, a sister, a brother, three grandchildren; and many nieces and nephews.

She also pre-deceased by her parents, four sisters and three brothers.

Arrangements were made by the Hathaway Community Home for Funerals in Somerset, MA.