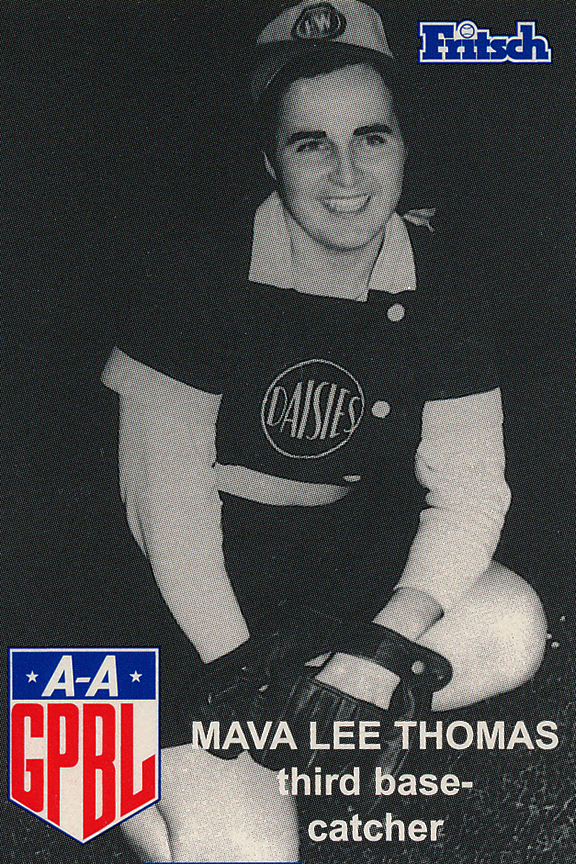 "Tommy" is the daughter of Herb Thomas, a native Floridian who had a 25 years Minor and Major League Baseball career. Herb played for the Buffalo Bisons. Boston Braves and New York Giants.  They are the only father/daughter to play in the Major Leagues and in the All American Girls Professional Baseball League.

"Tommy" graduated from Ocala High School in Ocala, Florida in 1948.  After a short stint in the AA playing for the Fort Wayne Daisies in 1951, she inlisted in the Navy Waves from 1952 & 1953.  She was Radioman at COMFIVE Communications Hqtrs, Norfolk Naval Base.

She graduated from University of Florida in 1958 with a Recreation Degree.  She worked with U.S. Government as a civilian  in Recreation for over 13 years.  Her last position was Women's Sports Director for Armed Forces Sports with the Department of Defense in Washington, D.C. She joined the Ocala Recreation & Parks Department in 1987.  She was the Special Events Supervisor.    "Tommy" enjoyed golf, swimming, fishing, bicycling chess, backgammon and video games.

Not many people would recognize the name Mava Lee Thomas, but “Tommy” Thomas was an Ocala (FL) icon whose professional baseball exploits and lasting legacy are well recognized.

A native of Marion County, Thomas got her baseball skills from her father, Herb Thomas, who played with the Boston Braves and New York Giants in the 1920s. Herb taught his daughter the finer points of the game and, after she graduated from Ocala High School in 1949, Tommy went off to Fort Wayne, Ind., to play for the “Daisies” of the All American Girls Professional Baseball League.

The league was formed during World War II to keep baseball relevant during the early years of the war, after many players were drafted into the military. The league folded in 1954, but was popularized in the 1992 movie “A League of Their Own.”

“She was gifted athlete and a wonderful person. She is in the Baseball Hall of Fame in Cooperstown (as part of the All American Girls Professional Baseball League memorial) and her and her father are the only father/daughter combination to be in the Florida Baseball Hall of Fame,” said Bill Burton, who is married to Thomas' niece, Terry.

In an April 2009 Star-Banner story, Tommy Thomas said she earned $75 a week plus expenses with the Daisies.“That was good money back then, but we had to earn it. We played six nights a week and a doubleheader on Sundays. There was a strict conduct and dress code, and we got a stiff fine if we broke league rules,” she said.

After playing the 1951 season, Thomas became concerned that dwindling attendance signaled the league's demise. She was determined to continue playing ball and after friends told her the military had female ball teams, she joined the Navy and served as a member of the Armed Forces Recreation Society.

“They had the best looking uniforms and the recruiter was very confident about my chances of being able to play ball,” Thomas said in the 2009 story about joining the Navy. She enlisted in 1951 and played softball and basketball in intramural leagues. The Navy took the state championship for softball the years she played.

After discharge in 1953, Thomas also played two years with the Hagerstown (Md.) Mollys fast pitch baseball team. She also earned a degree in recreation from the University of Florida and dedicated the rest of her life to recreation.

Thomas joined the city of Ocala Parks and Recreation Department in 1984 and helped establish such events as Light Up Ocala and the annual fishing derby at Tuscawilla Park. She retired in 1995.

“She just always was willing to give of herself. She was an absolutely wonderful lady,” said Burton, who knew Thomas for more than 30 years.

Ruthie Burnham, who knew Thomas from the Navy Lady Vets of Marion County, remembered her “smile and upbeat attitude no matter what the circumstance.”

“We all think Tommy is a very special person, and she will be missed by so many people throughout Marion County,” Burnham stated. Burton also remembered Thomas' tireless attitude. After she retired, she would routinely make presentations about her time in professional baseball, where she played third base and catcher, he said.

Thomas' survivors include her sister Kathleen Thomas and several nieces and nephews. The family will receive friends from 4 to 7 p.m. Friday at Hiers-Baxley Funeral Home, 910 E Silver Springs Blvd. Funeral services are scheduled there at 11:30 a.m. Saturday, with a reception to follow.