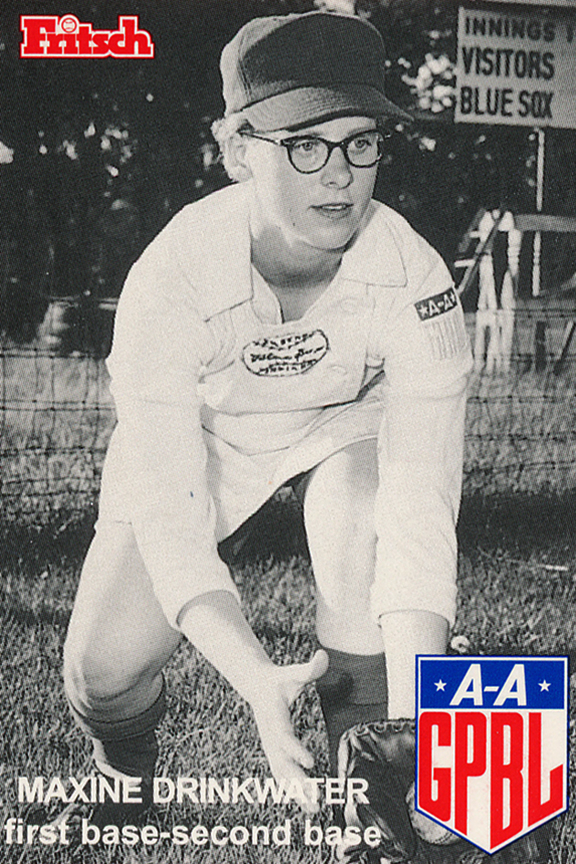 Simmons, Maxine Drinkwater
By Jeneane Lesko
Maxine remembers playing hard ball with her three brothers while growing up in Camden, Maine. As a sophomore in high school in 1951 Maxine read about an exhibition game featuring professional women baseball players from the AAGPBL. Maxine said, "I didn't get to see the game but I did write the league. Ni the spring of 1954 she received an invitation to tryouts in Indiana. She chose to miss her senior class trip and traveled to Indiana with her mother to tryout. "I had never traveled before," said Maxine, "I didn't like it then and I still don't like it. But my mother had a great time and she traveled back to Maine alone! I was asked to join the league on my 18th birthday. I guess that was my birthday present! I was allowed to go home for graduation but then had to come right back."

As a rookie Maxine expected little playing time but she showed her versatility as a utility player at second and first base. As a rookie she felt mostly ignored by the manager and older players except for the team's shortstop, Gertie Dunn. Maxine fondly remembered Gertie, "Gertie took me under her wing and helped me out a lot. She saw I had talent and wanted me to play second base. Rookies were lucky to play at all. I played a lot! She got to know Helen "Nordie" Nordquist and was good friends with Gertie, but Maxine was quiet and soon became homesick and quickly admits, "I wouldn't have lasted if it wasn't for Gertie's friendship. I am so grateful to Gertie. She took care of me and I was on my best behavior. I loved to play. I had the team's best fielding average but it still was very difficult because rookies were not accepted. I feel very fortunate to have played as much as I did."

After the league Mary returned to Maine. She worked for Sylvania in Walderboro and Tibett's Hearing Aid Company in Camden. Later in life Maxine earned a license as a certified Nursing Assistant. Maxine continued to play softball and was a player-coach for awhile. But Maxine said "I really loved to play, not coach although I did coach boys and girls Little League for many years."

Today, Maxine lives with and cares for her Mother who will be 93 in January. Maxine swims and lifts weights in the winter and plays golf in the summer. She was excited about her golf game this past summer. "I usually golf alone" said Maxine "but this day I teed off on the ninth hole and the groundskeeper was watching. I hit the ball to the right of the green and it started rolling toward the pin and disappeared. The groundskeeper and I both walked up to the hole and looked in. There it was my hole in one!" Congratulations Maxine!