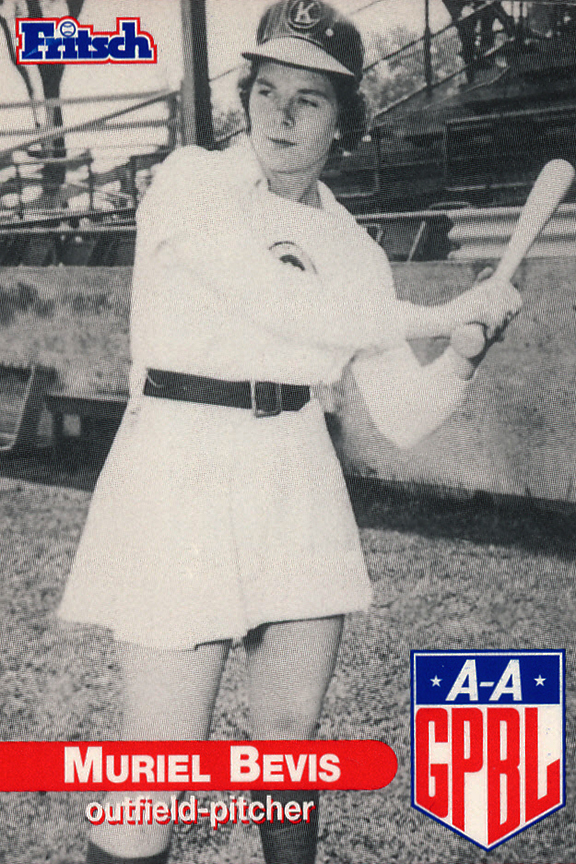 Muriel Bevis [??Breezy??] (October 7, 1928 - October 29, 2002) was a female outfielder and pitcher who played in the All-American Girls Professional Baseball League during the 1950 season. Bevis batted and threw left-handed. She was born in Corona, Queens, New York City.

By 1943 a new All-American Girls Softball League was formed. Started largely to provide entertainment for baseball fans whose beloved heroes had gone off to World War II, the league would eventually shift gears and become the All-American Girls Professional Baseball League, which was dissolved at the end of the 1954 season.

Muriel Bevis was one of 25 players who made the All-American Girls Professional Baseball League and who hailed from New York City and State, including Gloria Cordes, Mildred Deegan, Nancy Mudge, Betty Trezza and Margaret Wigiser. Bevis grew up in Westhampton Beach and often found herself playing softball at Cedarhurst Stadium, where she was approached by a talent scout who offered her a contract to play in the AAGPBL. Bevis entered the league in 1950 with the Kenosha Comets, and was used at outfield and as an emergency pitcher. She was a steady performer during her only season, ranking between the top ten in home runs (5), runs batted in (43) and stolen bases (38), helping Kenosha reach the playoffs, though the team lost in the first round of post-season action. Bevis was a long time resident of Kerrville, Texas, and later moved to Mount Juliet, Tennessee, where she died at the age of 74.

KERRVILLE - Muriel June "Breezy" Bevis, 74, of Kerrville, died Oct. 29, 2002. Born on Oct. 7, 1928, Breezy had been an active part of the community since she first moved here 31 years ago. Best known in the past for her participation in the Baseball Hall of Fame's All-American Girls Professional Baseball League, Breezy was a born athlete who loved the competition of the team sport. Recruited in 1949 when an AAGPBL scout spotted her playing, she quickly became part of the Kenosha, Wisconsin Comets. By 1951, she was a player for the famed Bluebirds of Chicago, one of 10 teams in the fast pitch softball league.

The Movie "A League of Their Own" was based on the story of the women who played for the AAGPBL, and had a character by the name of Breezy in it, although she denies that it portrayed her. Breezy continued in basketball by pursuing Men's Basketball Full Court for three years. She was a part of the team when they took the championship for their sponsor, Equitable Life Insurance Company.

In addition to her baseball career, Breezy took up the sport of golfing and was mentored by Gene Mosier in Florida. She went on to mentor others, just for the love of the game. "Play Ball" wasn't her only interest, and once in Kerrville, she took part in the Senior Games for 10 years. She participated in track, horseshoes, deck shuffleboard, ping pong, washers and free throw basketball.

Breezy worked as a title searcher for several title companies in Florida and New York. One who always had a real love for helping others, Breezy taught roller skating, art and crafts at daycamp, where many children had the opportunity to enjoy and learn from her. Those who knew her will deeply miss her presence in the community and in their lives.

Breezy requested no service in order that her many friends and family members throughout the nation would be spared the trip to Kerrville. But she leaves this message for family and friends. "How blessed I have been to be part of you. May God be with you. Chin up, Boots on! Bye, for now..!"

Memorials may be made to Peterson Hospice of Kerrville or to the American Cancer Society, P.O. Box 291231, Kerrville, Texas 78029.