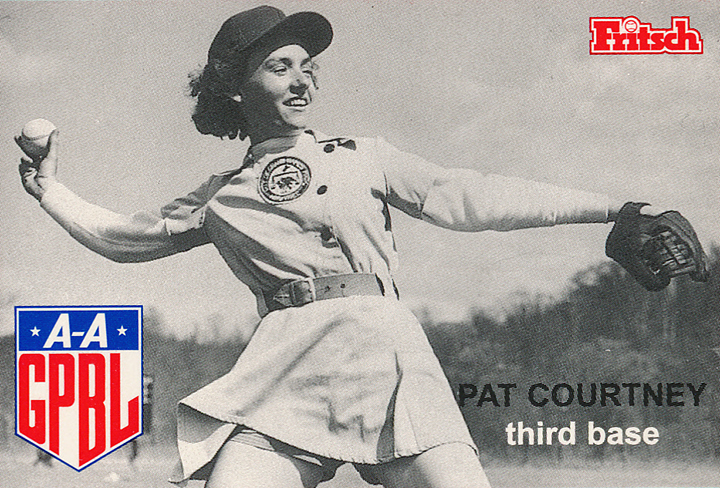 Exerpts from Patricia Courney's obituary in The Boston Globe, July 17, 2003:

Patricia died from Stomach cancer at the age of 71.    She was born in Brooklyn, MA and moved to Everett at the age of 11.  She graduated from Everett High School, where she excelled in sports.  She played basketball in a Catholic Youth group under the coaching of another Everett All-American, Maddy English.

Pat played only one year in the AAGPBL before she went on to earn a degree in accounting in 1958.  She was an accountant working for the IRS for 30 years and retired in 1988.

Pat attended the players' reunion at the Cooperstown Baseball Hall of Fame in 1988 when the league was recognized as major part of the establishment of the Women in Baseball Exhibit.  She was also an extra in the movie depicting the League which was  produced by Penny Marshall in 1992.

Pat was greatly loved and admired by her family and co-workers.  Her sister commented she was a straight arrow and very hard-working .  An IRS co-worker wrote:

"I had the privilege of knowing and associating with Pat Courtney as we lived out our careers with the Internal Revenue Service. Pat’s career was enforcingt the civil aspects of the Internal Revenue Code. During our tenure with the Service, Pat and I worked several investigations together. It was a pleasure to work with her. I always found her to be a friendly, hadrworking, and a dedicated professional.
Pat was one of the first women to break into the ranks of the then all male bastion of "Revenue Agent." Pat stayed the course, finishing at the top of her Revenue Agent class. Her technical expertise of the tax laws and the interpretation of those laws quickly won her the respect of her peers, others she worked with in the IRS, and also the many tax accountants and lawyers she came in contact with as she carried out her duties and responsibilities. When it came to doing her job, Pat was extremely business-like. She was firm when she had to be, but always friendly. Her work product was done in an extremely professional manner and correct in every detail. Only on an extremely rare occasion was one of Pats audits ever reversed. Pat knew her "stuff," and everyone knew that she knew her "stuff." Many times she was called on to teach the most complicated changes in the tax law to other revenue agents. A born instructor was she.
Her smile and gregarious personality were contagious. She could party when it came to party, but she was always very much a lady.
For many of us, Pat was just not a colleague but also a friend, a person you could confide in and know that what you would say to her would never go beyond the confines of the conversation.
We all miss Pat Courtney, but we also know that she is now a member of some AAGPBL team in Heaven. Pat will be doing what she likes doing the best, playing ball.
Again thanks for all you do in keeping this most import part of our history and heritage alive.”

Patricia Courtney, who played third base for one season in the All-American Girls Professional Baseball League before becoming an agent for the Internal Revenue Service, died July 12, 2003 in her Everett home Saturday of stomach cancer.  She was 71.

Ms. Courtney signed with the Grand Rapids Chicks after an open tryout at the Everett recreation center in 1950.  She was released five weeks later, but soon signed with the Chicago Colleens and played the rest of the season with the team.

She said it was the best summer of her life.  “Being only 18, I loved all the travel involved in playing for the Colleens,” she said in an August 1991 interview with the Globe.  “I had a great time.”

Her sister, Betty, of Everett, said she “was like a vacuum cleaner in the field.”

Born in Brooklyn, Ms. Courtney moved to Everett with her family when she was 11.  She graduated from Everett High School in 1949.  After her year in professional baseball, she enrolled in night classes at Bentley College and graduated with a degree in accounting in 1958.  She then worked for 30 years as an IRS agent, retiring in 1988.

That year, Ms. Courtney and the other veterans of the Girls League were honored at the Baseball Hall of Fame in Cooperstown, NY.

Ms Courtney was a source of information for director Penny Marshall’s popular 1992 movie, “A League of Their Own,” a fictionalized tale about two sisters playing in the Girls League.  While on the set, she would occasionally help one of the movie’s stars, Madonna, warm up.

“She would say, ‘Will you go out and play catch with me, just to practice?’ ” Ms Courtney told The Christian Science Monitor in 1992.  When asked if Madonna would have been able to play in the Girls League, Ms. Courtney was tactful. “She is a very hard-working gal, I’ll give her credit for that,” she said.  “I understand she did improve later.”

Her sister said the comment was typical of Ms. Courtney’s “straight-arrow” way of seeing the world.  “There was no gray,” she said.  “There was black, and there was white.”

Ms. Courtney was also one of several former players who were extras in the movie’s Hall of Fame recognition ceremony. “I’m the one in the royal blue suit who walks past the camera twice,” Ms. Courtney said in an interview for an August 1993 article in the Globe.