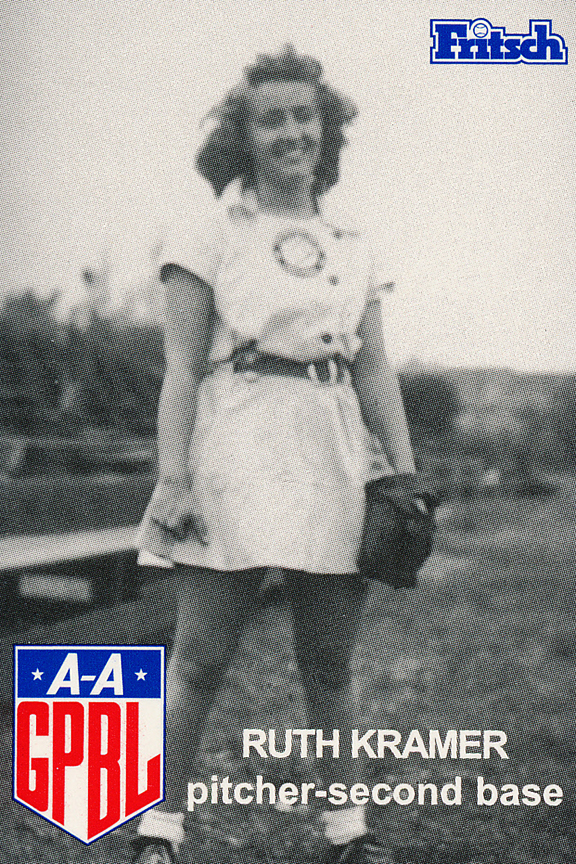 I learned to play baseball in my Dad's cow pasture. Dad would hit balls to me, and if you could field a ball there, you could play anywhere.

I played softball in Pennsylvania between the ages of 13 and 17. I was considered the best pitcher in the state. I played in three national tounrments in Florida, Oregon, and California.

I played for the Crystalettes and was a pick-up player for Lancaster, Erie, and the Pottstown Cardinelles. Fern Sholllenberger was a teammate.

I was recruited by Max Carey at East Stroudsburg College in 1946. Max met me in Chicago, introduced me to Phil Wrigley, and escorted me to Racine Wisconsin. I was then traded to the Fort Wayne Daisies . I was the bull pen pitcher to Betty Wilkerson and Katie Vonderau was the catcher.

Faye Dancer was my favorite player and friend. My most memorable experience was being short sheeted every evening by Faye.

After playing baseball, I went back to East Stroudsburg College and graduated in 1948. I then coached softball for 16 years and won the District Softball State Tournament. I taught for 36 years and then retired and became a sheep farmer. I travel all over the country showing my National Championship sheep. I am considered one of the top breeders in the country.

Excerpts from Article: "Hartman, Ruth Kramer" by Jim SargentBrian Englehardt
Ruth Kramer Hartman played for the Fort Wayne Daisies of the All-American Girls Professional Baseball League during the 1946 and 1947 regular seasons, then with the Grand Rapids Chicks in the 1947 league playoffs. Before playing in the AAGPBL, Ruth was one of the top softball pitchers in her hometown of Reading, Pennsylvania. After her time there, she returned to Reading and resumed her excellence on the softball mound until she retired from pitching more than 10 years later. At the same time, she started a girls’ softball program at Reading High School, where she coached with great success for 16 years.

In 2003, Baseballtown Charities, an organization in Reading associated with the Reading Phillies AA franchise dedicated to giving financial support to area youth baseball and softball programs, created a “King of Baseballtown” award to be presented annually  to a resident of the Reading area based upon lifetime accomplishments and contributions to baseball or softball. With the successes that Ruth had achieved on both softball and baseball diamonds, it was only fitting that she was designated as the first woman to receive the award, receiving the title on January 24, 2008. However, after being informed that she was named “King of Baseballtown,” Ruth stated that title did not suit, proclaiming, “I want to be Queen.” And so it was decreed: Baseballtown had its first “Queen.”

Ruth A. Hartman, 89, of Limekiln, passed away Monday, November 9th, 2015 in the Reading Hospital and Medical Center. She was the widow of William D.L. Hartman, who passed away January 25, 2015. Born in Leesport, she was a daughter of the late John F. and Annie (Kissling) Kramer.

She was a pioneer for women's athletics and was a Physical Education and Health Teacher for the Reading School District for 36 years.

Ruth was one of the original members of the All-American Girls Professional Baseball League, along with other young women that played professional baseball during World War II. She was known as Ruth "Rocky" Kramer and played for the Fort Wayne Daisies during the summers of 1946 and 1947.

Ruth was also known as a perennial champion breeder of Corriedale Sheep.

Ruth is survived by one daughter, Karen A., wife of David L. Kase, one granddaughter, Kelly A., wife of Seth A. Beaver; one brother, Gary J. Kramer; and one nephew, John C. Kramer of Charleston, SC.