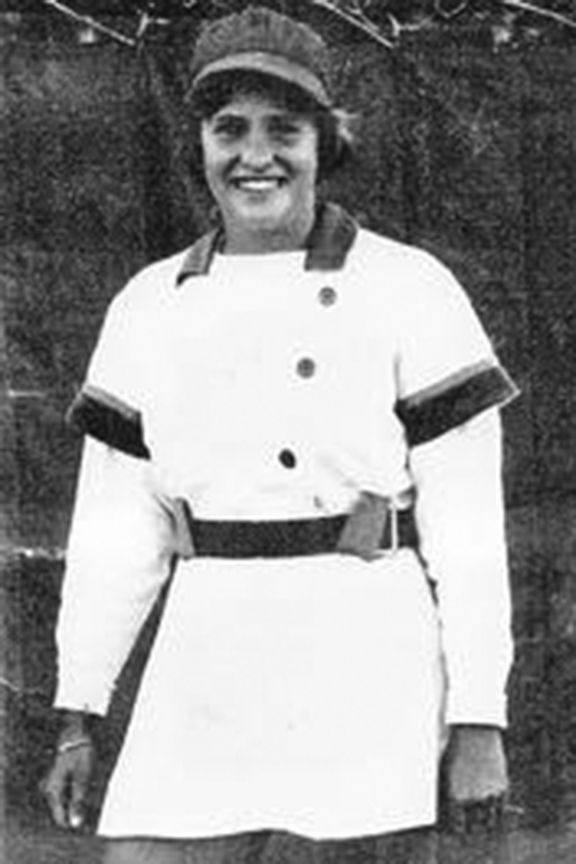 I was born on June 1, 1939.  Having been raised in Grand Rapids, I  lived and breathed the Grand Rapids Chicks from the time I was old  enough to hold a glove in my hand--the glove being a first baseman's  glove, since the first baseman, Inez (Lefty) Voyce, was my special  hero on the team.  I went to as many games as I could possibly  afford;  and after each of those  games, I would greet Lefty with a  coke and a pat on the back for a great game (always played well, in  my eyes).

In 1951, a position as bat girl for the Chicks opened up, and Lefty  asked me if I was interested in the job.  I thought I had died and  gone to heaven.  With the approval of my parents  (who would have to  drive me to and from all the games) I eagerly accepted.  What a  thrill it was to actually have my own "Chick's" uniform and to actually  be on the field with the team, even though I did have to be the  bat girl for the visitors.

The following year Marilyn Jenkins, who was the "senior"  bat girl at  the time, was asked to be a player on the team.  With Marilyn now  playing for the Chicks, I became the bat girl for the HOME TEAM.  It  was like winning the lottery.

I  remember those magical evenings during warm ups before the game,  when Ziggy Zeigler would urge me to get into the batter's box and  "hit a few."  I thought my heart would pop right out of my chest.   Then there were those special moments during the games when the  pitcher would get on base, and I would have the privilege of running  her jacket out to her.  I remember one game, when Beans Risinger hit  a double, I got to run all the way out to second base to deliver her  jacket to her.  How special was that!   And I especially remember the  moments after each winning game, when Ziggy would burst from the  field through the locker room door and get us started as we shouted  our victory song: "Oh, we're the Grand Rapids Chicks,  and our team  always clicks, and forever in battle we'll win..."  Wonderful moments  to remember!

In 1954 I was offered a job as a counselor-in-training (which would   be followed by a full time counselor job) at Camp Newaygo, a YWCA  camp near Newaygo, Michigan.  My parents and I decided that it was  time for me to move on, and I reluctantly accepted the offer.  But  how fortunate I was to have had those three wonderful summers as a  bat girl for the Chicks.

After high school, I went on to college and graduated from Michigan  State University.  I then married, moved to Kalamazoo, Michigan, had  three sons, and became a teacher in the Kalamazoo Public Schools for  the next thirty years.  Those were the busiest of years, to say the  least.  I retired from teaching in 1999.

I remain very busy during these retirement years. I am volunteering  for various organizations (mainly Planned Parenthood and Meals on  Wheels).  I'm also singing in the Kalamazoo Community Chorale (who  would have guessed that!  It must have been all that practice singing  the Chicks' victory song).  I especially enjoy my summer days and  evenings at the family cabin on a river north of Baldwin, Michigan--a special place which my father and grandfather built after World War  II.  I love spending time there  with friends and family, tubing and  sitting around the campfire.   And one of the things I most enjoy  around that campfire is reminiscing about those wonderful days as a  bat girl for the Grand Rapids Chicks.