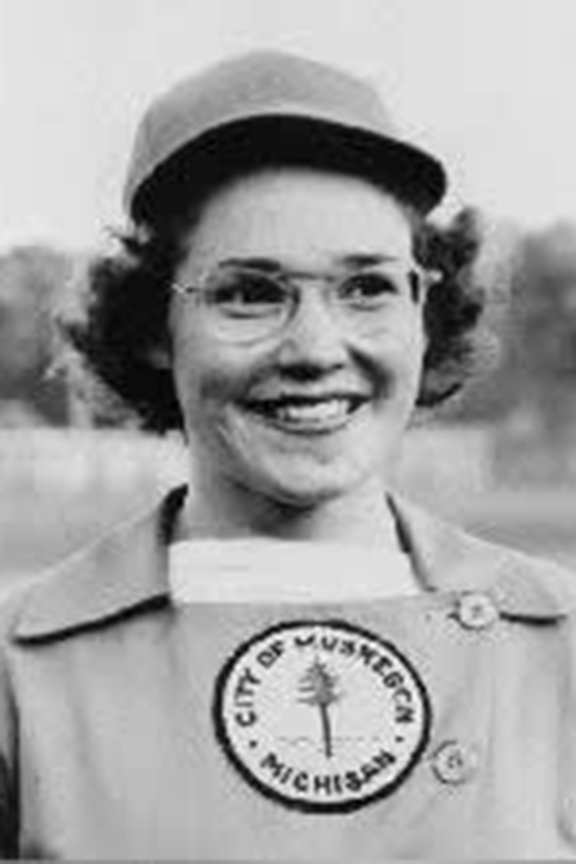 Grew up on a farm south of Ogema. Obtained elementary schooling at a rural one-roomed school and then Grade 12 plus a three-year Commercial Course at Ogema High. Ogema School Principal encouraged me to participate in sports when I left Ogema to seek employment. Played in the Senior "A" Ladies Intercity Softball League in Regina, SK. Joined work force in 1944. Worked in various departments of the Saskatchewan Civil Service for approximately 30 years, including five years with the Premier's Secretariat.

-Scouted by the All American Girls Professional Baseball League (AAGPBL) in 1944 while playing softball at Central Park in Regina.

-Was player/coach, assistant coach, and coach in latter years of participation.

-Member of the AAGPBL Board of Directors for 12 years and Spokesperson for Canadian All Americans to date.

November 5,1988 - National Baseball Hall of Fame & Museum, Cooperstown, NY:  the AAGPBL was recognized as a League. They have a permanent display, "Women in Baseball," which includes a list of all AAGPBL players names.   They are in the process of erecting a life-sized bronze statue of an All-American girl in batting stance on the library lawn. It is to be completed by 2006.

December of 1999 -  was recognized by SASKBaseball for dedication in building and promoting amateur baseball in Saskatchewan.

July 10 of 2004: - was honoured in my home town of Ogema in Saskatchewan, at the historical Grandstand in the fairgrounds. It is referred to as the Sports Complex, and it has been declared a Municipal Heritage Property and was dedicated as the "Arleene Jobnson-Noga Grandstand" in recognition of my athletic accomplishments, baseball in particular.

After serving 12 years on the Board of Directors for the AAGPBL Players' Association, Inc. I agreed to be the Spokesperson for Canadian former ballplayers which I maintain to this date.

Actively volunteer at the Saskatchewan Sports Hall of Fame and Museum in Regina, including participation in their Education Program for Schools.

Volunteer with the Regina Garden Associates at the Regina Floral Conservatory, being a member of the Floral Display Committee.

Married Ron Noga in 1963 who was since deceased (1994). Have two children, Carol Lee Noga Scott (Lloyd) and Robert Noga (Karen). I have six grandchildren.

Arleene, late of Regina, SK passed away peacefully on Tuesday, March 14, 2017 at the age of 93 years. Predeceased by her husband Ron Noga;and three sisters, Arleene was survived by her daughter, her son, her grandchildren, her great-grandchildren, and her brother, as well as numerous nieces and nephews.

Arleene was born January 1, 1924 in Ogema SK. She grew up on the family farm near Ogema and attended school in a one-room schoolhouse.

Arleene was an accomplished athlete. Her most memorable accomplishment was playing ladies professional baseball in the All-American Girls Professional Baseball League (AAGPBL) from 1945-1948. Known as “Johnnie”, she was the top fielder at third base for three consecutive years and set a single season record fielding average of .942 in 1947. She also played over 300 consecutive baseball games and became known as The Iron Lady. Recognition for Arleene’s contribution to sports includes induction as a “player” to the Saskatchewan Baseball Hall of Fame, the Saskatchewan Sports Hall of Fame, the Canadian Baseball Hall of Fame & Museum, and the Regina Sports Hall of Fame. She is also part of the Women in Sport display at the National Baseball Hall of Fame and Museum in Cooperstown NY. Arleene served 12 years as the Canadian representative on the Board of Directors for the AAGPBL Players Association. Following her years playing in the AAGPBL, Arleene continued playing and coaching ladies softball in Regina until 1979.

Arleene participated as a technical advisor and an extra during the production of the major motion picture “A League of Their Own” where she met with some of the stars such as Madonna, Rosie O’Donnell and director Penny Marshall. Besides baseball and softball she was also an outstanding curler who skipped and played on many championship rinks, and also found time to become an excellent bowler.

In 2004, Arleene was honoured by her hometown of Ogema when the historical heritage grandstand was dedicated the “Arleene Johnson-Noga Grandstand” in recognition of her athletic accomplishments, baseball in particular. She accomplished many of these athletic endeavors while working approximately 30 years with the Government of Saskatchewan, including 5 years with the Premier’s Secretariat, and raising a family as well. Arleene’s other activities include volunteering with the Saskatchewan Sports Hall of Fame and Museum and her love of flowers and plants lead her to many years volunteering with the Regina Garden Associates at the Regina Floral Conservatory where she contributed to the design and maintenance of the floral display. Most recently Arleene was a feature character in the extremely successful play “Diamond Girls” and was also featured in Maclean’s magazine as a Canadian “who made history, or brushed up against it-and helped build a nation.” Arleene loved being outdoors and spent countless hours tending vegetable and flower gardens wherever she lived and particularly enjoyed many years camping at Sherwood Forest west of Regina. She cherished time with family and watching and encouraging her children and grandchildren play their sports and providing endless support for all their endeavors. Arleene’s family would like to express their gratitude to the medical staff of the CCU and unit 3F of the Regina General Hospital for their kind care provided to Arleene.

A Come and Go Celebration of Life was held at the Speers Family Centre, 2333 Cornwall Street, Regina, SK on Tuesday, March 21, 2017 from 7:00 p.m. – 9:00 p.m. Donations in Arleene's memory may be made to the Regina Floral Conservatory, or the Saskatchewan Sports Hall of Fame.