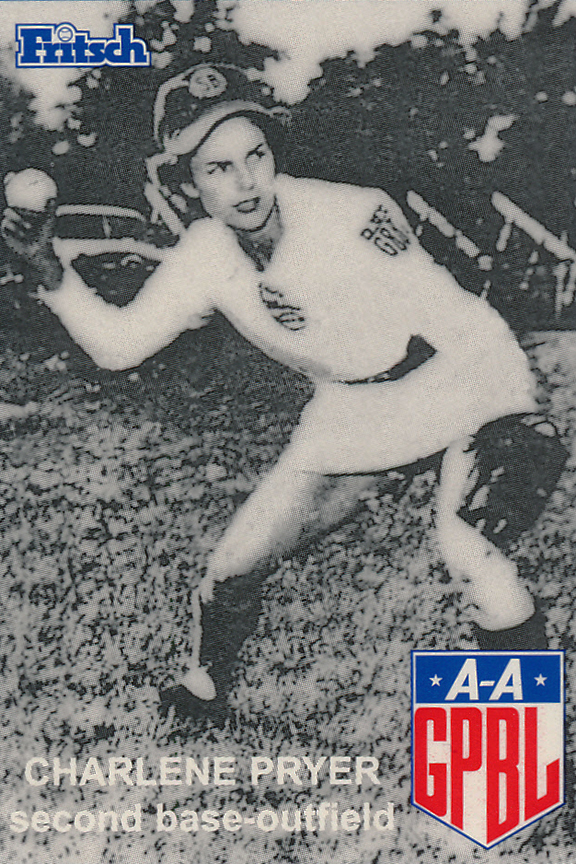 Shorty played ball in southern Califorinia and was coach by her father, an ex-professional baseball player. She attended University of Califorina in LA for two years and then served 26 months in the Marine Corps. After returning from the service she was signed by the AAGPBL. Shorty's temperment and personality made her a quick favorite of the fans and her team mates. She became one of the top outfielders in the league with a fielding average of .995. She was an excellant bunter who had good speed. Shorty was a clam, cool heads-up player who has made many sensational catches in centerfield. Her love of baseball can be attributed to her father, a former professional, who bagan teaching her at an early age. During her playing days she sang twice weekly over the local radio station. "Shorty" has the "Charlene "Shorty" Pryer Mayer Ball Field" named in her honor at the Wilson Elementary School in Medford, OR.

A utility player for seven seasons in the All-American Girls Professional Baseball League (AAGPBL), she was one of the fastest runners in the circuit's history. Raised in coastal California, Charlene learned baseball from her father, earned notice as a singer, and worked as one of the first female DJs in the country.

Joining the Marine Corps Reserve in 1944, she entertained the troops as a vocalist with the Dick Jurgens Orchestra then in 1946 tried out for the AAGPBL and was assigned to the Muskegon Lassies.  She played both infield and outfield and steadily improved her skills while becoming a feared base runner. Charlene accompanied the Lassies on their 1950 move to Kalamazoo then was traded to the South Bend Blue Sox. In 1951 she had her most productive campaign, earning All-Star status while leading the league in hits, batting .312, stealing 129 bases, and helping the Blue Sox to the first of two straight league crowns. Despite more on the field success, 1952 saw a number of the Blue Sox have problems with manager Karl Winsch, leading Charlene to retire at the end of the year after having achieved a .255 lifetime batting average with 510 stolen bases.

She married in 1953 and lived for many years in Medford, Oregon, where she worked as a school truant officer and playground coach. In 1988 she was part of the the AAGPBL’s players recognized by Cooperstown's Baseball Hall of Fame. The league's story was told in the 1992 movie "A League of Their Own." Bob Hufford)