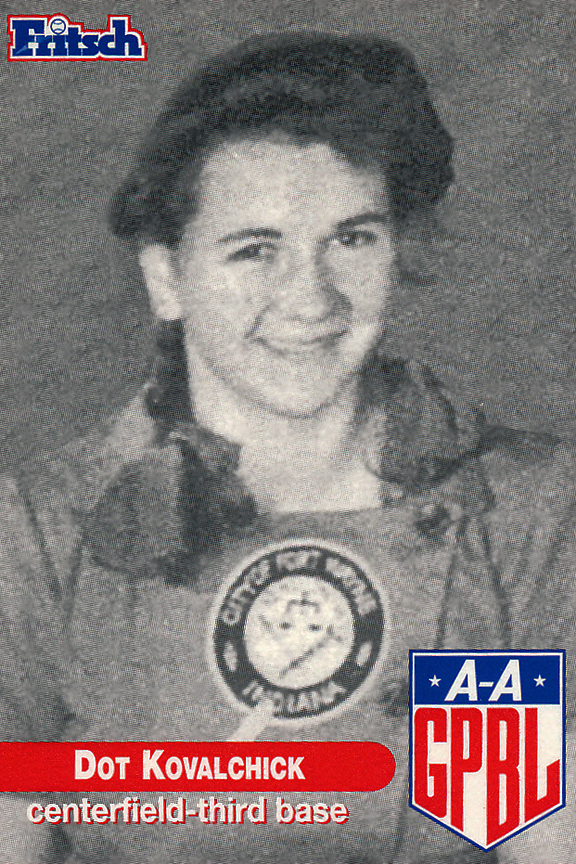 Dorothy “Dot” Kovalchick Roark came to the Twin Cities on April 15, 1952 from Sagamore Pennsylvania at the age of 26, four years following her retirement from her 8 year baseball career from 1940 – 1948.

She was a first baseman on an all-male baseball team which traveled throughout 66 towns and cities in western Pennsylvania during WWII while the men were off to war.

Her parents owned and operated “The Hotel Sagamore” during that time and the baseball team was owned as well as coached by her father, a dedicated baseball fanatic. John Kovalchick or “Bounce” as he was known opened the door for many of his players resulting in four major and eight minor leagues opportunities during his lifetime. "Bounce" recognized his daughter’s God given talents, a baseball talent that completely surprised him.

"Bounce" utilized Dottie’s talent for baseball when in 1940 at the age of 14 she became the first baseman for her father’s team. Her strength and natural ability was unquestionable and the team of 14 male players ages 18-48 accepted her immediately as their teammate.

This fact inspired the men and before long, "The Kovalchicks" as they were called became known as the “Unbeatable Kovalchicks” or “Dot’s Kovies” as they were referred to by news reporters. The demand was so great that games were booked 2 years in advance. Other states pleaded to be booked but it was war time and gas was rationed. Fans would even offer their gas cards rations to help the team travel into adjoining states.

Towns and cities pleaded for return games because more money was collected and bigger crowds attended than ever before. People wanted to see this 5’2” pigtailed girl wearing big red bows in her hair that played ball with the men. Their team had to commit to doubleheader games both Saturday and Sunday every week to satisfy the demand.

In the spring of 1945, Dottie contracted with the All American Girls Professional Baseball League as a Fort Wayne Daisy, the first girl’s professional baseball league in history founded just 2 years prior in 1943. Dottie was assigned to 3rd Base and Center Field much to her disappointment since she was far advanced as a baseball player. That same year she chose to return to the all-male team and played for 4 more years.

During those 4 years she went to Orlando, FL for spring training. The Brooklyn Dodgers were also in spring training and spotted Dottie practicing on an adjoining field. This resulted in an invitation to practice with them. They said they wished they had her on their team.

At the age of 19 she tried out for the Pittsburgh Pirates Minor League and was offered a contract with the contingency that her mother also had to sign as her chaperone. Her mother fearing for her safety and security refused to sign thus ending further negotiations of the contract.

At the age of 22, Dottie was at her peak and chose to retire from the game. It was a great blow to her father, however, realizing Dottie was serious and would not change her mind he disbanded the team and canceled all commitments. It was 1948 so Dottie’s eight year baseball career came to an end.

Numerous doors opened immediately giving her the training and knowledge that equipped her for her own business as a Century21 Real Estate Broker which she excelled in for 24 years.

She retired at the age of 69 in 1994. Eighteen months after retiring from real estate she designed and created a man’s silk tie "Crazy Quilt" and entered it into the annual International Quilter’s Association show in Houston, TX. Her quilt came in 2nd place competing against entries from 89 countries in the “Crazy Quilt” division. Her quilt has been appraised for $10,000.

In 2004 Dorothy completed her promise to her dying father she made ten years earlier and completed a 5 star historical classic, 300-page book entitled “Uncertain Destiney, A True Story” by Dorothy Kovalchick Roark. It is a must read book, currently in its 8th printing and available from the author.

Dorothy was born December 31, 1925 to John Kovalchick and Anna Lucas Kovalchick in Sagamore, PA. Dorothy met her Lord and Savior Jesus Christ June 10, 2020 surrounded by her family and friends. Dorothy was preceded in death by her mother and father, two brothers, and her husband.

Dorothy is survived by her daughter, step-daughter and step-son, two granddaughters, a grandson, four step-children, 7 step great-grandchildren, 1 step great-great grandchild, and many nieces and nephews along with other cherished family and friends.

Among her many accomplishments, one of her most defining was her baseball career. Dorothy played baseball with an all men's team from 1940-1948 with the Kovalchicks where she was known as "The Queen of Diamonds." The team was led by her father John or "Bounce" as he was well-known. Her favorite position was first base. Dorothy was signed by the Fort Wayne Daisies of the All-American Girls Professional Baseball League in 1945 but went back to the men's team after only one season. [Along with all players in the AAGPBL, Dorothy is honored] in the Cooperstown Baseball Hall of Fame and has her baseball banner on display at the Armstrong Sports Hall of Fame in Kittanning, PA.

After her baseball career ended, she moved to West Monroe, LA where she began a new career in real estate, opening Century 21--Dorothy Roark. Dorothy was also known for the many parties she hosted, always with a theme featuring her slovak pastries from recipes handed down from her mother. After retirement, she was able to pursue her passion for travel, write a book ("Uncertain Destiny") dedicated to her father, and win second in an international quilting competition with her first and only crazy quilt.

Special thanks go to her caregivers, who were loved and part of the extended family. Their kindness, compassion, and strength during her long journey will forever be appreciated and remembered.

Dorothy will forever be the "Queen of Diamonds" in the hearts of all who loved her.