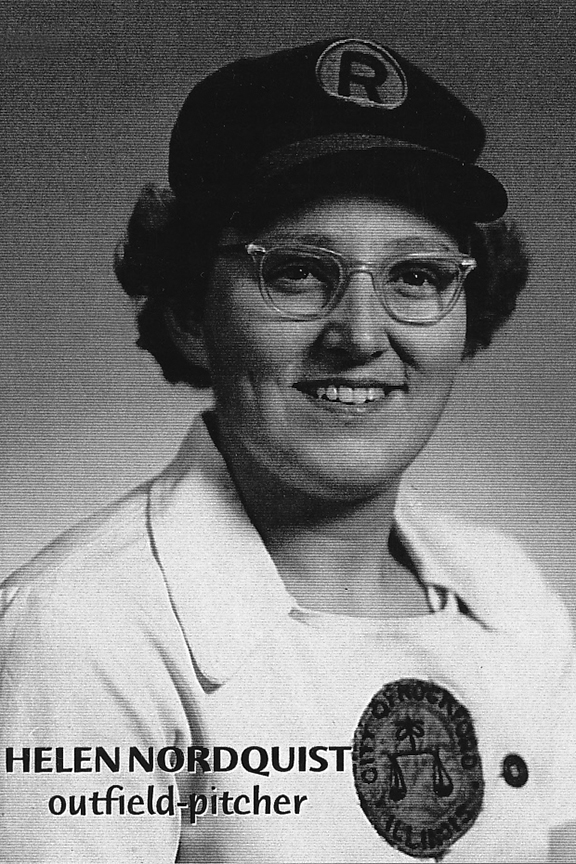 HELEN E. “NORDIE” NORDQUIST was born to Swedish immigrants in Boston, Massachusetts, March 23, 1932, and she lived in nearby Malden most of her life. As a result she’s a life-long Red Sox Fan. Nordie grew up playing baseball and tag football with the neighborhood boys and was the first girl in her junior high school to earn a school letter for sports. In high school, she co-captained the softball team as a junior and senior.

Nordie signed as an outfielder for the Kenosha Comets of the All-American Girls Professional Baseball League (AAGPBL) in 1951 and played for the AAGPBL’s Rockford Peaches (1952–53), and South Bend Blue Sox (1954). After the AAGPBL folded, Nordie played amateur softball in the New England states and took up bowling. She worked as a switchboard operator, an accountant, and retired as a toll collector on Interstate 95 for the State of New Hampshire.

Nordquist, Helen
By Kathi Caldwell-Harper
"HELEN NORDQUIST:  A LEAGUE OF HER OWN"

“At softball practice for a local league a few years ago, I asked the coach if I could see if I still had the ole eye and snap of the wrist.  I did—I could still hit and field the ball.”  --HELEN NORDQUIST, FORMER ALL-AMERICAN PROFESSIONAL BASEBALL PLAYER.

If it is true that athletes, like artists, are born with talent, then Helen Nordquist of New Durham, New Hampshire came into the world with the ability to play baseball.

Helen’s talent was such that in the 1950s she played for the All-American [Girls] Professional Baseball League.  The League’s female players traveled throughout the midwestern United States and were as talented as any male major league player.

Today, few residents of New Durham know that their neighbor was once featured on baseball score cards and newspaper sports pages.  Because Helen is modest, she has told few people that the popular movie “A League of Their Own” was about Helen’s team, the Rockford (Illinois) Peaches.  Indeed, Helen and her old teammates were invited to “try out” as extras in the movie.  Helen smiles as she recalls the invitation, which stated to bring your “spikes” (baseball shoes) and glove, no matter how old they were.

“I didn’t go,” Helen says.  “I knew my legs wouldn’t get me to first base fast enough!  But it was an honor!”
A native of Malden, Massachusetts, Helen says she was always a tomboy and loved sports.  At the age of 14 she won the first “all around” sports award ever presented at her junior high school in Malden. As a senior she won a gold cup and was named the “best girl athlete.”

After graduating from high school, Helen read a notice in a Boston paper announcing tryouts for the All-American Professional Baseball League.  The League was started by the Wrigley’s Chewing Gum Company during World War II.* Any young woman with ball-playing ability could travel to Virginia to try out.

Helen recalls that the tryouts were competitive.  This was real baseball.  The women played hardball—overhand pitching with the same rules as regulation baseball.

Although these women were in a different league from her Malden Collegiate teammates, Helen made the tryouts, and she was assigned to play with the Kenosha (Wisconsin) Comets.

The All-American teams played from May to September.  The female players were always chaperoned, never allowed to wear slacks and expected to attend Sunday church services.  They traveled to their games by bus and stayed at the best hotels.  Helen recalls that her weekly pay as a player was very good for that time period.

“I was very young, one of the youngest on the team,” Helen says. “I was in awe of being on the team and didn’t mind when my teammates teased me about being a rookie.  I loved the traveling, but I did get lonely sometimes.  I remember when we played at a town in Iowa.  It reminded me of Massachusetts towns and I got really homesick.”

After a year with the Comets, Helen played for the Rockford Peaches of Rockford, Illinois.  She stayed with the Peaches for two years, playing center or right field.  She also played for a year as a pitcher for the South Bend Blue Sox.

Anyone who remembers the 1950s knows those were days when little boys idolized ball players and entire families made a Sunday outing of going to a game.  Helen recalls that the fans were die-hards, and that they brought presents to their favorite players, adding to the glamour of the game for Helen.

The teams disbanded in the mid-1950s due to the advent of television and lack of ticket sales for the games.  Helen returned home to Massachusetts and adjusted to the changes by continuing her involvement in sports on a local level.

New Hampshire was always a second home for Helen and she recalls her childhood days, “My uncle had a farm in Alton and I helped him mow and harvest hay.  This was before baling machines were used, and it was hard work.  We harvested the hay with horse drawn equipment.  Every Sunday, we sold vegetables, milk and cream.”

The former ball player moved to New Hampshire permanently in 1983 where she has played on amateur league teams.
While rural New Hampshire is a long way from the cheering crowds and the spotlight of her professional baseball days, it seems sure that if Helen picked up a ball and bat today, the magic and talent would be there.

That athletic talent has always put Helen in a league of her own.

*The league was actually started by Philip Wrigley through his Chicago Cubs organization. 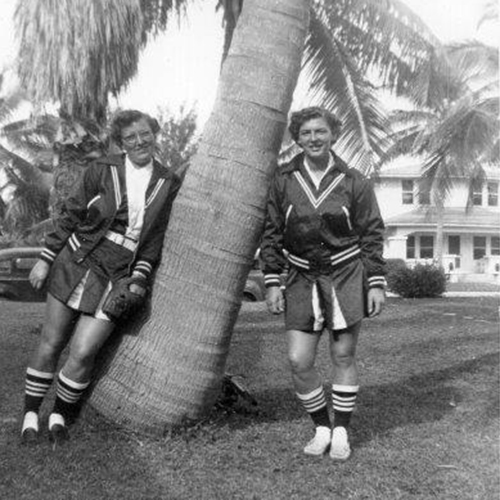