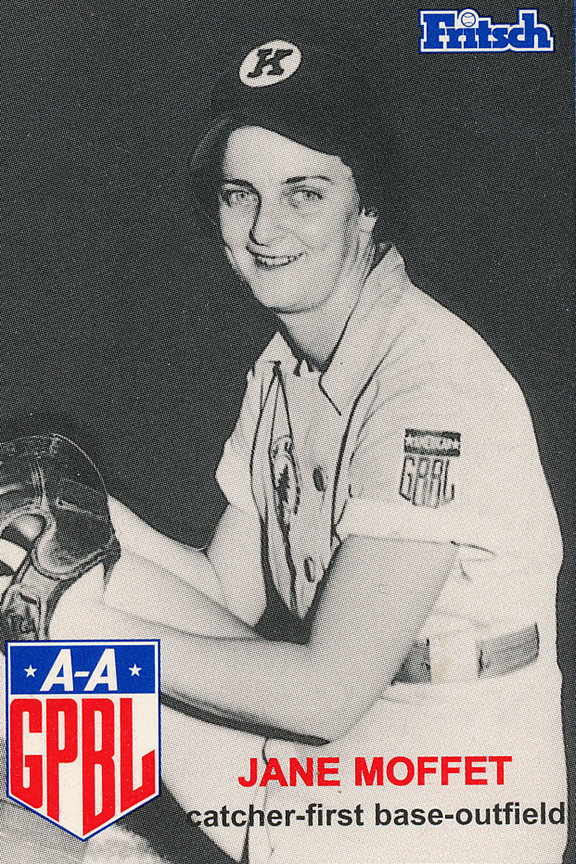 Jane was an outfielder who could be counted on with some heavy hitting and sharpe fielding plays.

Moffet, Jane H. (7/2/1930 – 3/16/2018)
By Radzieta Funeral Home
Jane H. Moffet, age 87, of Rio Grande, NJ died on Friday March 16th, 2018 at the Cape Regional Medical Center with her niece at her side along with her family of beloved friends. Funeral services were held on Monday April 2 at the Radzieta Funeral Home, 9 Hand Ave in Cape May Court House, NJ at 10am. Interment followed at Ocean County Memorial Park, Toms River, NJ. Visitation preceded the funeral service at 9:00am. Letters of Condolence may be posted at www.radzieta.com.

She was a 1948 graduate of Pitman High School and attended East Stroudsburg University for her undergraduate degree in Health and Physical Ed. In addition she received her master's from Rutgers University in Administration and Guidance. Prior to her retirement in 1994, she spent 42 years as an educator, 23 of which she was Principal of Saddle Brook High School from 1971-1994.

Jane was a member of the Kalamazoo Lassies, one of the original teams of the All-American Girls Professional Baseball League, which was depicted in the 1992 movie, "A League Of Their Own." She was a member of the International Women's Baseball Center in Rockford, Illinois across from Beyer Stadium home of Rockford Peaches. Jane played on two Midwest Teams from 1949-52 [Springfield Sallies and Battle Creek Belles]. Jane's athletic prowess was surpassed by her career in Education teaching in Edison and South Plainfield school.

In 1988, Jane was inducted by the National Baseball Hall of Fame in Cooperstown, NY and the East Stroudsburg, Hall of Fame in 1990. Jane toured the country doing personal appearances for the All-American Girls Professional Baseball League [Players Association]. Jane was fortunate enough to be inducted in five Athletic Halls of Fame. She continued to be active in her local community by serving on the board of directors at Cape May Legacy for many years. She also served on the Board of the AAGPBL for many years. She believed in empowerment through education which inspired her passion for the vision committee of the AAGPBL. She was instrumental in the creation of the "Woman at Bat" statue which stands in the Garden of Legends at Cooperstown's Baseball Hall of Fame. A pioneer, a visionary and an educator, she ran the bases with determination and commitment and hit the grand slam home run in life.

In lieu of flowers donations can be made in Jane's Memory to International Women's Baseball Center (IWBC) P.O. Box 1253, Cathedral City, California 92235.

Note:  To date, no AAGPBL players have actually been inducted into the National Baseball Hall of Fame.  However, all players who could be identified, including Jane, were posted on a comprehensive AAGPBL roster featured in the “Women in Baseball” Exhibit that the Baseball Hall of Fame opened on Nov. 5, 1988.