She was on a championship team 9 of her 10 seasons in the league. 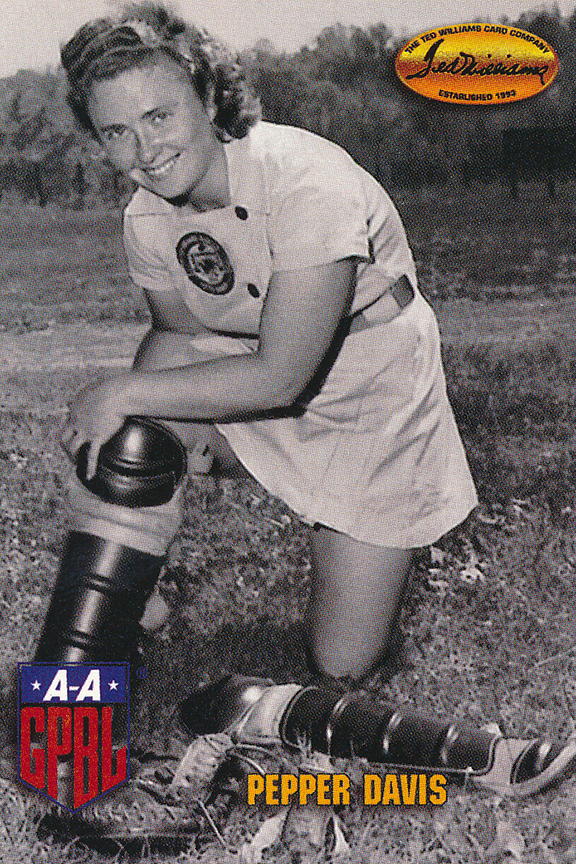 She was on a championship team 9 of her 10 seasons in the league.

By She was on a championship team 9 of her 10 seasons in the league.

Pepper was a fine catcher in the AAGPBL and she had a very high fielding average .977. She was a steady influence behind the plate and handled the pitchers very well and was always able to get the best out of them. Pepper was the co-writer of the Leagues song with Nalda Bird Phillips that the players sing at each reunion.

Lavonne Paire Davis, a star in the All-American Girls Professional Baseball League of the 1940s and 1950s and a consultant for the hit movie “A League of Their Own,” died on Saturday, Feb. 2, 2013 in the Van Nuys section of Los Angeles. She was 88.

Her death was confirmed by Jeneane Lesko, a board member of the league’s players association.

Davis, who was known as Pepper Paire in her playing days, entered the league in 1944, the year after it was formed by Philip W. Wrigley, the chewing-gum magnate and owner of the Chicago Cubs. Wrigley had worried that World War II would deplete professional baseball of male players and force it to fold. That never happened, but his women’s pro league became popular anyway, and Davis became one of its most enduring players.

She was 19, working as a welder in a shipyard and going to college part time, when her hobby playing softball in local leagues bore unexpected fruit: she and a friend, Faye Dancer, were recruited to join the Minneapolis Millerettes of the new league. Davis would eventually play for four teams over 10 seasons; the others were the Fort Wayne Daisies, the Racine Belles and the Grand Rapids Chicks.

Playing catcher as well as shortstop and third base, she won pennants with all but the Millerettes, and her 400 career runs batted in tie her for fourth in league history. In 1950, she drove in 70 runs in 110 games for the Chicks.

“Pepper was a fine catcher in the A.A.G.P.B.L., and she had a very high fielding average, .977,” said a playing summary on a Web site run by the league’s players association. “She was a steadying influence behind the plate and handled the pitchers very well and was always able to get the best out of them.”

Players wore short skirts, took classes in etiquette and charm, were often accompanied by chaperons. (Davis, who boasted of having boyfriends in various cities, had a reputation for eluding hers.) They played a grueling schedule of up to 120 games a season.

Davis, who grew up playing baseball with her older brother and later played on local softball teams, was one of relatively few players in the league from beyond the Midwest, but she fully embraced it. In 1944, she co-wrote a league anthem that players still sing at reunions, “Victory Song”:

Our chaperons are not too soft
They’re not too tough
Our managers are on the ball
We’ve got a president who really knows his stuff
We’re all for one, we’re one for all
We’re All-Americans!

The song was featured in “A League of Their Own,” which was released in 1992. Davis served as a consultant to the director, Penny Marshall, and was one of several players who helped inspire the fictional Dottie Hinson, a beautiful, power-hitting crowd favorite played by Geena Davis.

Davis, the player, said that another player, Dorothy Kamenshek, who died in 2010, was the league’s best player and also an inspiration for Hinson.

Lavonne Paire was born on May 29, 1924, in Los Angeles. In the early 1940s, she and Dancer played amateur softball on a girls team in the Los Angeles area called the Dr. Peppers, which was named for and sponsored by the soft drink company.

Davis is survived by two sons,  a daughter, four grandchildren; and a brother.

A brief biography on Davis’s Web site noted that the league seemed largely forgotten within a few decades after it ceased operations in 1954. Things began changing when players held a reunion in 1982. A flurry of news media attention was followed by recognition from the Baseball Hall of Fame and a 1988 documentary, which led to Marshall’s film.

By the mid-1990s, Davis and other players were signing autographs at memorabilia shows and even serving as celebrity guests on theme cruises alongside baseball greats like Bob Feller and Billy Williams. In 2009, Davis published a memoir, “Dirt in the Skirt.”