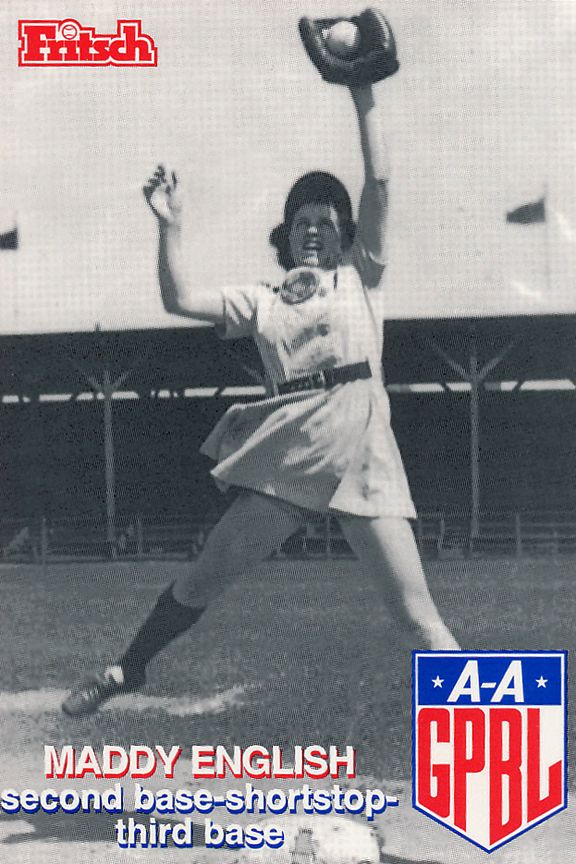 Maddy held down the hot corner for the Belles and she was a hard working, enthusiatic player. She had a natural interest and aptitude for sports and she liked track, tennis, basketball, badminton and bowling. During the off-season she was in trainning to become a physical education teacher. This bundle of dynamite became the mainstay of the Belles and was consistently rated as one of the top third sackers with the strongest arm in the game. Maddy was a timely hitter with excellant speed with a never-say-die attitude. She a multible year All-Star in the AAGPBL and finished her career as one of the best players to have played in the league.

Maddy English was honored by having a elementary school named for her in her home town.

The city of Everett lost a true legend and icon this past week with the death of Madeline K. “Maddy” English from cancer on Saturday, August 22. She was 79 years old.

English was a longtime educator in Everett’s Public Schools, but came to be best known for her career as a professional baseball player in the All-American Girls Professional Baseball League made famous by the hit movie, “A League of Their Own.”

In 1943, when gum magnate and Chicago Cubs owner William Wrigley was launching the league as a replacement for men’s baseball during World War II, Wrigley sent his scouts throughout the country to search for talent, and a friend of English recommended her to a scout he knew.

Although she hadn’t graduated from high school yet, English’s parents agreed to let her go to Chicago for a tryout. “My parents were athletically minded, so they signed the papers so I could go,” English once recalled in an interview with the Independent.

She played third base for the Racine Belles of Wisconsin for eight seasons, and was an all-star selection three times. The women of the league played their games through a grueling schedule over the course of the summers. “We played a 126-game schedule, one game a week and a doubleheader on Sunday,” English said. “Some of us girls used to joke that we were either crazy or we loved the game—and we did love it.”

In fact, English loved baseball since she was a little girl following her brother, Edward English, to the field to play with his friends. “He used to worry I’d get hurt, so he’d send me home,” English said. “When I got older, he would play with me. He taught me everything I knew about baseball. He was my idol.”

In November of 1988, English was honored along with the other players of the league at the Baseball Hall of Fame in Cooperstown, N.Y. “I was very proud for our league to be recognized in that way,” English said of the event. “Back then, there were no athletics for girls, and I like to think that we were a part of opening doors for the women of today.”

As proud as she was of her playing career, English was equally proud of her second career as a teacher and guidance counselor at the Parlin School in Everett.

In the winters during her playing career, English spent nights earning her bachelor’s degree at Boston University (B.U.). She taught at the Parlin Junior High School while earning her master’s degree at B.U., attending classes at night and on weekends. English finished the final 17 years of her career at the Parlin as a guidance counselor. “That was the best part of teaching,” she said. “You could really help the kids in that one-on-one environment.”

Last year, the city honored English’s many accomplishments by naming one of the new schools in her honor. The Madeline English School became the first public building in Everett named for a prominent woman, after then 13-year-old student Tiffani Macarelli wrote an essay in English’s honor.

Mayor David Ragucci said this week that it was an exciting day for him and the city to be able to honor English that way. “It was a proud moment for me to be the mayor the first time the city named a building after a woman,” he said. “And it was even prouder that that woman was Maddy English.”

Superintendent of Schools Frederick F. Foresteire, who was a colleague of English during her teaching days, recalled her as a role model for the city’s youth. “She was a special lady, there’s no question about that,” he said. “When you think about how far women have come in sports and work and all aspects of life, people like Maddy English helped lead the way.”

English’s niece, Madeline Mitchell, said that having the school named after her aunt was a proud and happy accomplishment for the entire family, but especially for English. “She was absolutely over the moon about that school,” Mitchell said. “Even after the dedication she used to say, ‘I still pinch myself because I can’t believe it.’”