Bonnie was the manager for the newly formed Kalamazoo Lassies team at the beginning of the season in 1950. 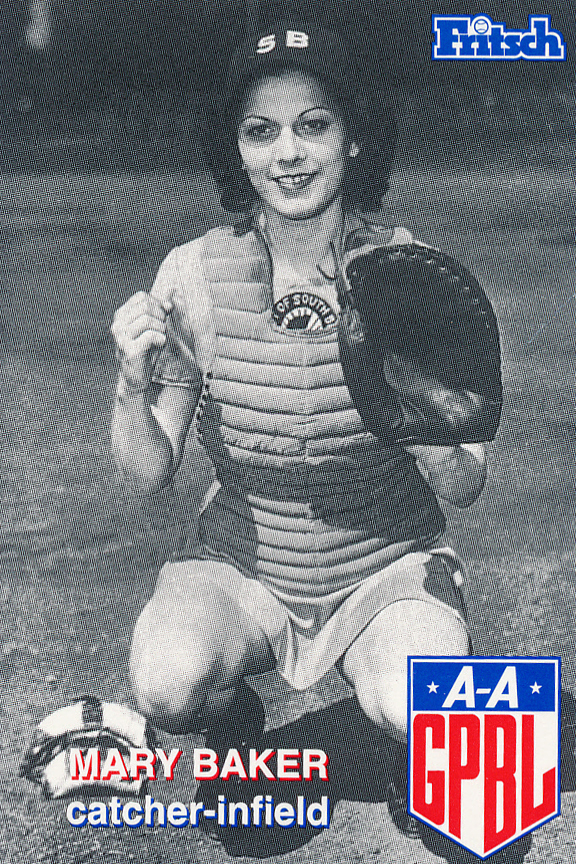 Bonnie was the manager for the newly formed Kalamazoo Lassies team at the beginning of the season in 1950.

By Bonnie was the manager for the newly formed Kalamazoo Lassies team at the beginning of the season in 1950.

Bonnie was a great catcher. Her highlights were playing softball in Madison Square Gardens and playing in the AAGPBL. She was the leagues All-Star catcher in 1946. Always a steady hitter and good base stealer made her a valuable player to have on the team. She was the Manger for the 1950 Kalamazoo Lassies. Bonnie's sister, Genevieve (George) MacFaul played in the League also.

HALL OF FAMER, MARY "BONNIE" BAKER, Regina native was rumoured to have been immortalized By Geena Davis in "A League of Their Own."

St. Marys - Mary Baker, inducted into The Canadian Baseball Hall of Fame & Museum in 1998 as one of 64 Canadian women who played in the All-American Girls Professional Baseball League, died Wednesday [12/17/2003] of respiratory failure at age 84. The AAGPBL was immortalized by the 1992 movie "A League Of Their Own," starring Geena Davis, Tom Hanks, Madonna and Rosie O'Donnell. While all characters in the movie were fictitious, it has been said that Davis's character "Dottie Hinson" most resembled Baker.

Baker was an all-star catcher who played for the South Bend Blue Sox from 1943 to 1949 before managing the Kalamazoo Lassies for three seasons. Her sister, Gene McFaul, also played in the AAGPBL. McFaul, who died last year, also played with South Bend in 1947. "Geena Davis was Mary Baker," her son-in-law Darrell Baker insists. "She was beautiful both on the outside and on the inside. She was a humble person who would do anything for anybody. She was a big fan of Canadian sports teams like the Blue Jays, Expos and the Saskatchewan Roughriders."

Arleene Noga, another Saskatchewan native who played in the AAGPBL, has often represented the Canadian AAGPBL players at Hall of Fame events and threw out an opening pitch at SkyDome last year. Noga, who will turn 80 on January 1st, didn't know Baker growing up, but remembers her as "a complete player with all five tools - a real competitor."

Baker [was] memorialized  at 1:00 PM at the Wascana Coutnry Club in Regina, [12/20/2003] and the family [discussed] with The Canadian Baseball Hall of Fame & Museum in regards to honouring her during the year 2004.

Contributing to this article was Rob Vanstone, Sports Editor of the Regina Leader Post