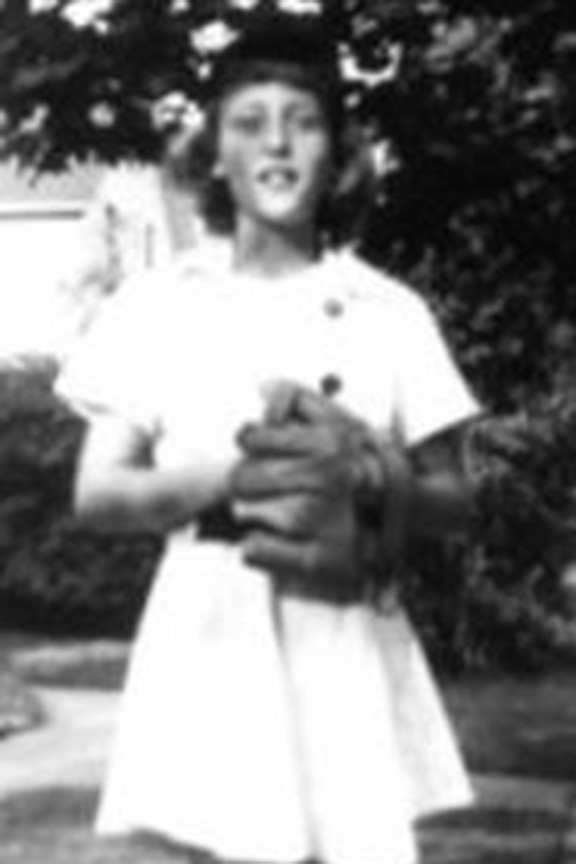 The 40's and 50's were good years in Rockford, Illinois. Rockford was a town of transplanted Swedes and Germans and Irish who manufactured things -- pencil sharpeners and farm equipment and tools.  For a time, Rockford was the second most populous city in Illinois. Yet Sue Black — she was Susan Kay Swanson then —remembers Rockford not as a city of smoke and broad shoulders, but as a friendly place, just a big town really, with nice neighborhoods stretched out along tree-lined streets.

In Susan Swanson's neighborhood, everybody knew everybody else, everybody played together, all the kids went to the same school.

And everybody in her city rooted for the Rockford Peaches.

The Rockford Peaches were a professional women's baseball team, the same club depicted in the  movie "A League of Their Own," [which played] at Bridgton's Magic Lantern. Sue Black has seen the movie. She liked it, but Sue cautions, "The women I remember were much better players than the ones they used for the movie!"

A touchstone of Susan Swanson's early summers was her time spent as batgirl for the Rockford Peaches. She loved the team and the way the town got behind the players. Next door to the Peaches' Beyer Stadium, a larger field housed the city's Class D minor league team, the Rockford Rox. "The men would draw 300 fans, and the Peaches would bring in 3,000, often on the same night," Sue's husband, Sam Black remembers. Sam is a Rockford native, too. He met Sue at Theodore Roosevelt Junior High School.

Sue was a good athlete who loved to compete. There were not many opportunities in those years for a girl in interscholastic sports, though Sue was on the water ballet team. She also played intramurals. She played sandlot baseball with the neighborhood boys and girls. In the Walker Elementary Will and Testament for 1949, Susan left "all her baseball hits to Patty Terranova. [For an interview], Sue went through an old scrapbook of clippings from Rockford newspapers, snippets out of time. She stopped to gaze at a picture of Dotty Kamenshek, perennial all-star, a Cincinnati native, who played first base for the Peaches. Kamenshek [was once offered a contract to play men's minor league baseball].

"What I remember is that they were excellent players, real baseball players," Sue Black [said]. " I wanted to play for the Peaches, but the team was gone before I ever got old enough. As I recall, there was never anybody right from Rockford on the Peaches."

A real-life Rockford girl, Lori Petty, starred in the movie, along with Geena Davis and Tom Hanks. Petty played Kit, a frustrated sibling, who triumphs at the end of the picture. That's a victory of sorts for Rockford, though the character Petty played was traded to the Racine Belles before the cinematic climax.

The movie is fast-paced and funny. Though the ballplaying of the actresses doesn't quite meet the purity of Sue Black's memories, the women in the movie look more like professional baseball players than do 95% of the male actors who have impersonated sluggers in previous Hollywood epics.

She thumbed through the book, remarking on this player or that. Her favorite player was the shortstop, all star Snookie Doyle. Dottie Ferguson was one of her favorites, too. "If I could play, I wanted to play shortstop, like Snooky," she said.

"I had another scrapbook full of Peaches' clippings," Sue Black said last Friday. "My mother said she threw it away about four years ago. She said she thought I didn't want that old stuff!"

Sue got her job as batgirl because her father knew someone connected with the team. "He told them he just happened to have a daughter who was a baseball fanatic," Sue said.

Sue never got to travel with the Peaches, as she was "too young." In Beyer Stadium, she would do chores, collect equipment and "try to get foul balls back out of the stands." She was a Peach by association for a few years. The 1950 campaign was interrupted in May by a bout of polio. She quickly recovered, and remembered coming back to work for the Peaches that summer.

"They were not only good baseball players, they were really nice people," Sue remembered. They sent her cards when she was in the hospital. They let her play during warmups. Susan Kay Swanson felt special. "They were a good, wholesome group of women. They had to live under very strict rules. They weren't tough looking; they weren't tough acting."

"On the ball field, they weren't fooling around. This was not a pansy league. They got a lot of bruises and sore legs and floor burn type things."

Sue has a baseball signed by all the members of a Peaches team from the early 1950s. Snooky Doyle, Ruth Richard, Louise Erickson, Nickie Fox...Heroes.

Sue remains a baseball fanatic. It's genetic. At 96, her grandmother never missed a Cubs' game. Her mother won't miss one now. Sue follows the Red Sox and the Chicago teams. And  her beloved Rockford Peaches have a home now in the Baseball Hall of Fame.

And well they should. The All-American Girls Baseball League pulled the hit-and-run and turned the double play smoothly from its formation in 1943 to its demise in 1954, a time when the men's minor leagues also started to wither.

"Those women played a darn good brand of ball," says Sam Black now, thinking back 40 years. "Everybody went to see the Peaches."