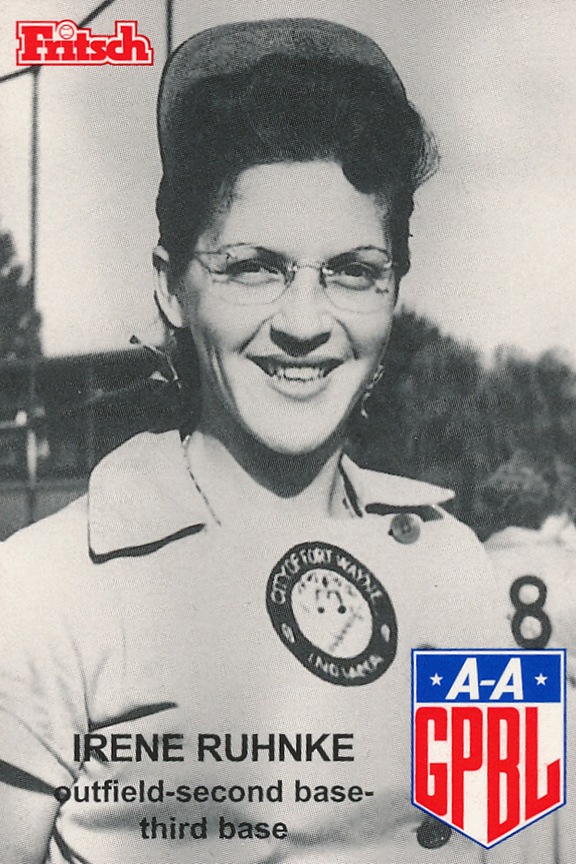 Irene played in the NGBL in Chicago before joining the AAGPBL.  She played a solid second base for the Belles and was a good hitter when hitting behind the runner.Irene could also hit to all fields.

When many of the men who made baseball America's favorite pastime went to war, it was the women throughout the country who stepped up to the plate.

Ticket sales in the 1930s were poor because of the Depression, and with the onset of World War II, Philip Knight Wrigley needed an attraction to fill seats in Wrigley Field. He started a not-for-profit baseball league for women, and Bridgeport native Irene Ruhnke Sanvitis made the cut.

In 1943, Mrs. Sanvitis left her Bridgeport home, kissed her parents goodbye, and boarded a bus for Rockford. She joined the Rockford Peaches, where she was known as "Ruhnke Dunk" and played shortstop, second base, and the outfield. Her team went on to win the All-American Girls Baseball League championship, of which the 1992 movie "A League of Their Own" was based.

One of 13 children, Mrs. Sanvitis and her sister Alice Cygan started playing baseball when they attended St. Bridget's Catholic School in Bridgeport. They competed against teams throughout the city. They kept playing when they attended Kelly High School.

The women were paid a minimum of $50 to $120 a week, which at the time was a lot of money but often money was still scarce, said Mrs. Sanvitis' son, Tony Sanvitis.

"Some of the games took several days to reach by bus, and because they couldn't afford to sleep in a motel they often lived on the bus for days at a time," he said.

Women were expected to behave like ladies, and news articles from the time detailed how many of them attended "charm" school and had chaperones with them. They were also fined for misbehaving. There were many women who could not read or write, and the other players often taught them how to do both on the long bus trips, Tony said.

"She said the most difficult part of it was having to play in a skirt," said Tony. "Some people banged their knees up a lot."

Mrs. Sanvitis' last season was 1947. When her boyfriend returned from the war, she hung up her spikes. "She quit the league to be footloose and fancy free in Rockford," Tony said his mother once explained.

The league continued on for several more years before folding.

"We just got a trophy and that was it," said Cygan.

It wasn't until nearly 50 years later, with the release of the movie "A League of Their Own," that many of those memories were resurrected.

Mrs. Sanvitis began receiving mail from all over the country from people who recalled watching her play, who still had her baseball cards and requested an autograph.

Her son said: "She didn't know what the fuss was all about. She said that she enjoyed playing in the league and with the women, but it was history so why not just let it be."

But she corresponded with all of her born-again fans, he said.

Looking back on what she had been a part of, it still baffled her that there is no professional women's baseball league today, her son said.

Mrs. Sanvitis spent the rest of her life in Rockford, where she married and had two sons. She worked as a machine operator for 27 years at J.L. Clark Corp., from which she retired in 1985.

In addition to her son and sister, Mrs. Sanvitis is survived by another son, John; another sister, Rose; a grandson; and two step-grandchildren. A service will be held Saturday in Rockford.