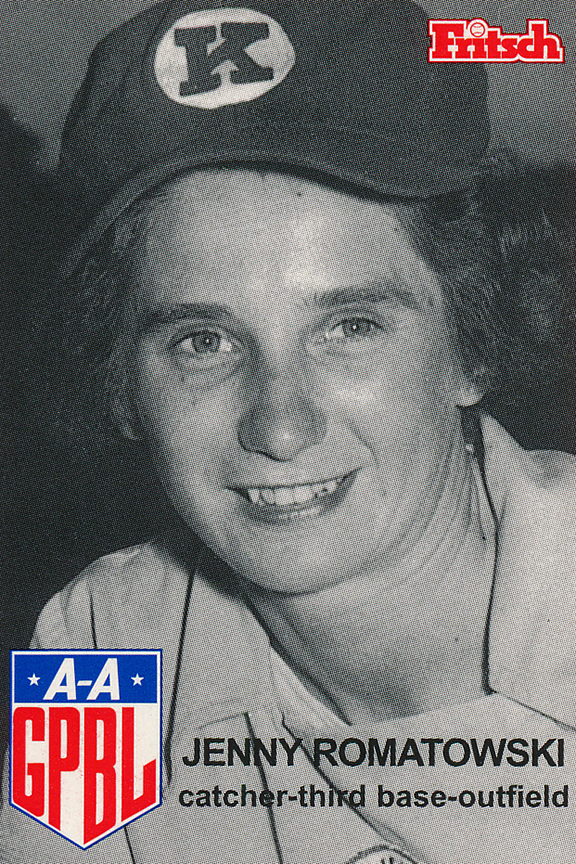 Jenny was an outstanding rookie defensively for the South Bend Blue Sox in 1946 as a utility infielder/outfielder. She started her career primarily as a utility infielder but then switched to catching. In the off-season Jenny attended Michigan State where she studied to become a physicial education teacher. She was also into photography as a hobby.

Jenny "Romey" Romatowski of Palm Harbor, Florida formerly of Wyandotte, Michigan. Cherished aunt of many nieces and nephews. She is a highly recognized athlete from Wyandotte. Jenny, known to her teammates as "Romey", traveled the world during her outstanding athletic career as both player and coach in three sports - softball, baseball and field hockey. She and her ball playing teammates were the subject of the popular film "A League of Their Own."  She died March 12 2014.

In fact, Romatowski is actually in the movie, which begins and ends with an actual reunion of former All-American Girls Professional Baseball League (AAGPBL) players at the Baseball Hall of Fame, Cooperstown, NY. A special exhibit of "Women in Baseball" was unveiled and the entire league were recognized as special members of the Hall of Fame. "I appeared briefly in the scene inside the Hall of Fame at the exhibit," she said to an interviewer, "but you only get a glimpse of me. However, it was great getting together with all my former teammates."