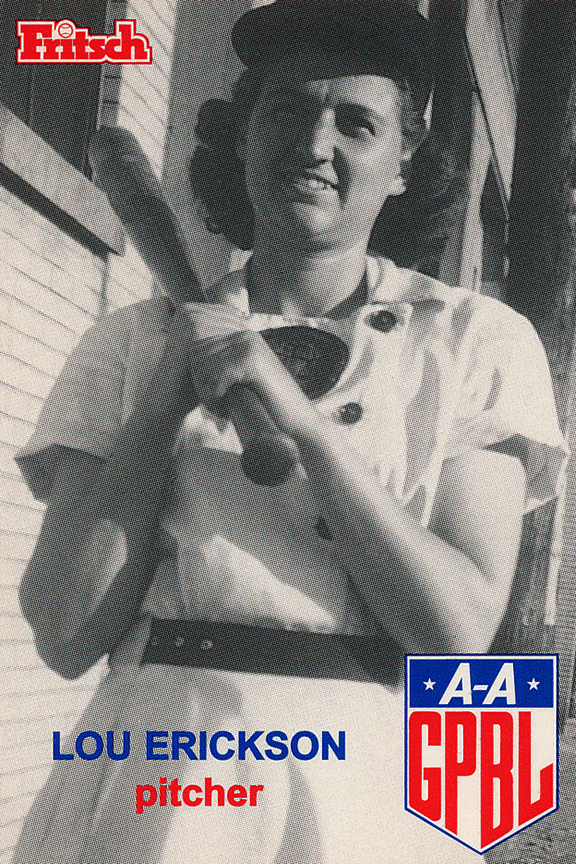 My very first tryout was 3 days after graduation in 1946.  My folks borrowed a car and drove me down to Racine.  In fact, it was my birthday, June 2nd, and I just hit 17 years.  The team was leaving on a road trip that day and I was invited along at their expense—they also sang “Happy Birthday” to me.  I think we were on the road about 7 days.  They (the girls) were actually playing a version of fast pitch softball on a larger infield layout and underhand pitching.  It was clear I needed more experience, so I took the train home.

My next tryout was in 1948 (overhand pitching started) when I got a letter telling me to report to Chicago for Rookie Camp.  As luck would have it, Mom’s cousin Alta Paine and her husband Charlie Hadac were here on vacation.  They lived in Cicero, Illinois, a suburb of Chicago and I went with them to Chicago by train and stayed with them at their home while I trained for 2 weeks at the Rookie Camp at Shewbridge Field and coached by Lennie Zintak.  There were several other girls there at the same time.  I thought I’d probably try out for the outfield, as that is mainly what I did around here – shag balls.  That went O.K. for a few days, and then Lenny noticed I had a pretty strong throw in from the outfield and asked if I was interested in pitching, as they were always in need of them.  All I knew about overhand pitching was from what my Dad had shown me – how he held his curve ball, in shoot and drop.  Nowadays it’s called a slider and sinker.  Anyway, the secret was to get all that stuff over the plate.  It worked O.K. I guess, because Coach Lenny took me down to a game a week later.  It was an hour’s drive to the “Rookie” game where he had me pitch.  I guess they were pretty “green” like me.  My team won big (24-2) and I guess the other gals only got 2 hits – even the crowd booed me a little because I was getting everybody to hit into an out.  At the end of 2 weeks Coach Lenny told me I would be joining the Racine Belles in Peoria, so I was put on a train and met the team at their hotel.  I was met in the lobby and escorted up to my assigned room which was shared with a couple other players.  The first gal I met had 2 of the most perfect black eyes (shiners) I every saw.  When I asked her what happened she explained…the first rule in the book is to keep your eye on the ball, but it wasn’t supposed to turn out this way.  She was playing centerfield and a fly ball came her way and she lost it in the lights and it came down between her glove and her other hand it nailed her between the eyes.  You know her as “Frisco” Zale (Mrs. Tony).  Her name at that time was Philomeno Theresa GianFrancesco.  The chaperone gave me meal money for the rest of the road trip -- $5 a day and all in cash.  I had never seen so much money all at once.  The best part was that you could keep all you didn’t spend.  My first contract was $55 a week.

When we finally got to Racine, there was a room at a private home ready for me and another rookie, Jerry Bureker, from the State of Washington.  We share a room and we each had a single bed and our own dresser.  All ball players stayed in private homes while at home.  All of our landlords were checked out, so we knew they were O.K.  The chaperones had all the phone numbers so they could have curfew checks.  We had 2 ½ hours from the end of the game to shower, eat and get home.  Racine had a pretty solid team, so I was used sparingly.  I pitched batting practice nearly every day and also the usual running and shagging balls.  My manager was Leo “Pop” Murphy and he was a doll.  He started me one night when my folks and my Uncle Basil and Aunt Stella were there.  Would you believe that about the 3rd inning the fog rolled in off Lake Michigan and the game was called?  We couldn’t see our outfielders, so the umps decided to call it before someone got hurt.  Mom, Dad, Basil and Stella all got to go to Whiteys and eat with the team.  It was a very nice dining place – we could only go to eat where the bar was separate from the dining area and we were allowed 2 beers – no other alcohol.

My first win was a big surprise.  We were in Ft. Wayne against the Daisies and our starting pitcher got clobbered for 5 runs in the 1st inning.  “Pop” told me to warm up – I was going to start the 2nd inning.  I had pitched batting practice, so I was wringing wet already, but I went another 5 innings and held the Daisies while we proceeded to score 12 runs.  “Ike” Kotowicz pitched the last 3 innings – the win was mine.  My season record:  1 win & 0 losses.

We got into the playoffs and unfortunately met up with the Rockford Peaches and lost in a 5 game playoff.  At the end of the season each ball club in the league could hold a certain number of players and put the rest in a “pool” which was a list of players sent to the headquarters in Chicago.  The other teams could select players from this list for their rosters.  The idea was to try to keep all team fairly well-balanced and not have a dynasty by any one club.  Rockford selected me and that’s where I played my last 2 years.  Bill Allington, manager.  IN 1949 & 1950 we had Spring training in Peoria, Illinois, at Bradley University.  The pitchers and catchers reported 5 days earlier than the rest of the squad – I was there April 30th both years.  We all went through all types of stretching and calisthenics, plus running, throwing, hitting and learning to slide properly.  For the sliding session we put on a padded overall type pants and went to the sliding pit – it was fun.  After a couple weeks of training we toured with the Peoria Redwings all over the State playing exhibition games while getting into shape.  We sure got tired of playing the same gals for a couple weeks.  The first week of training was tough because everyone got so stiff and sore.  We were assigned rooms on the upper floors and were forbidden to use the elevators while training.

The Peaches won the pennant and playoffs both years I was with them 1949-50, (plus in ’48 when they bet the Belles).  Toward the end of my playing days I was finding out that the majority of the girls had started out playing semi-pro fast pitch softball in New York, Chicago, California, Arizona and Canada.  This was some pretty fast company I ended up with.  Strangely enough it didn’t scare me – just thought it was a bunch of gals playing ball and enjoying it and for good money too.

When we were at home we practiced nearly every morning.  When we were on the road we had team meetings every day.  We had to learn the rule book from cover to cover and we discussed strategy for each game.  Our free time was usually spent at the moves or playing cards in our rooms.  All traveling the 3 years I played was by chartered bus and because all our games were at night, we drove all night to the next town.  Our rooms were always reserved and the chaperone handed out meal money in cash before we got off the bus.  We handled all our own luggage, equipment and uniforms.  Since we were forbidden to appear in public in slacks or shorts, we carried them on the bus and changed as soon as the bus got going – it was dark enough.

Then 3 years I traveled around the country playing baseball are ones I will never forget.  The friends I have will always be remembered as the nicest people I’ve very been around.  There was never a cross word among or between any of them.  It was a great experience and it’s hard to believe it even happened.  Cooperstown is still a dream.

Louise E. (Erickson) Sauer passed away peacefully at her home on May 27, 2016.  She was born in Whitehall, Wisconsin on June 2, 1929 to Orlen J. and Sadie O. (Hanson) Erickson.  She was the oldest of their seven children.

Lou graduated from Arcadia High School at the age of 16.  Soon after, she received  an invitation to try out in Chicago for the All-American Girls Professional Baseball League that had been developed in 1943 during World War 2.  She played for the Racine Belles in 1948 and was traded and played for the Rockford Peaches in 1949 and 1950.  She retired from her baseball career to marry Burton Sauer.  They were married in Arcadia on November 29, 1950.

Through the years, Lou worked many part time jobs.  She worked at Vern’s IGA as a grocery clerk.  Later, she cleaned the Riverview Lanes for owners Adolf and Agnes Chitko and then Marc and Maryann Przybilla.  She coached the high school girls’ softball teams and also an Arcadia City women’s fast pitch team for several summers.  After Burton retired from the postal service, they rode together reading meters around Trempealeau County for several years.

In recent years, her home was a favorite stop for the Trempealeau County Tourism buses.  She would go out to the buses to hand out her baseball cards, tell her story of how she got into the league, talk about her experiences and also answer questions.  Along with her league mates, Lou was included in the National Baseball Hall of Fame in Cooperstown, New York on November 5th, 1988.

Another honor bestowed to her was being added to the Arcadia High School Alumni Wall of Honor.  Her final tribute was to be inducted into the La Crosse Sports Association Hall of Fame on March 15th of this year.  There will be a plaque with her name imbedded in the new walkway entrance to the Loggers’ Lumberyard when it is renovated later this fall.

Lou was an avid Brewers and Packers fan and also liked to cheer on the Cubs.  In her younger days, she hunted with Burt and later fished with Burt and the grandsons.  She was a loving mother, grandmother and great grandmother.  She taught family values by living as a true role model.