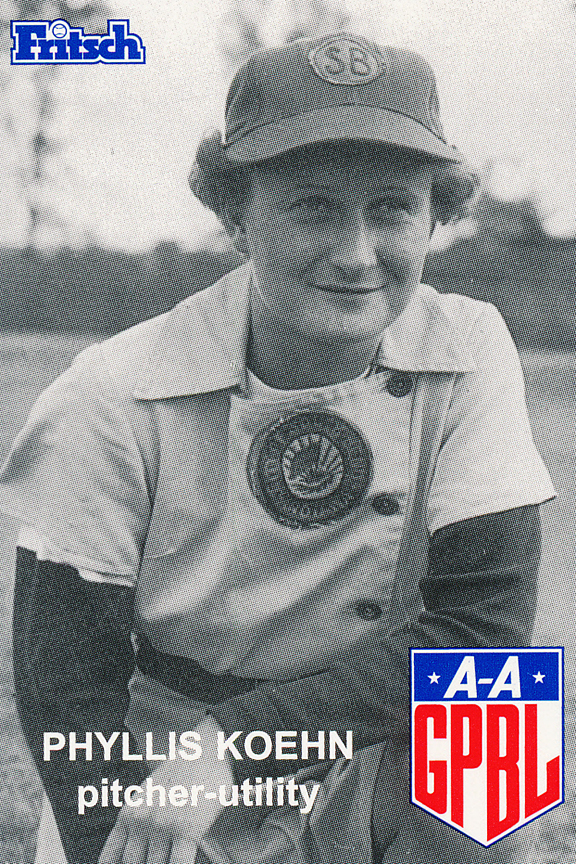 Phyllis was a reliable pitcher who had her best year in 1946 with the South Bend Blue Sox. That year she pitched in 39 games and finished the season with 22 wins and 15 loses. Racine was a strong contester in a field of eight teams. They finished 3rd behind first place Racine and second place Grand Rapids, but only missed the pennant by a three game spread between the three leading teams. She started out with Kenosha as one of the top outfielders in the league. As a member of Racine she not only pitched but she also played third, first and in the outfield.  With her great knowledge of the game she became a valuable asset to the Belles.

"Sugar" was not only a force to be reckoned with on the mound, she was a timely hitter with an 8-year lifetime ERA of .200.

By the fall of 1942, World War II had caused many Minor league baseballteams to disband. Young men were being drafted into the armed services, and many feared the worst for Major League Baseball. Philip K. Wrigley, who was in charge both of the Wrigley Company and the Chicago Cubs National League club, searched for a possible solution to this dilemma. The answer was to establish a women's professional baseball league as a promotional sideline to maintain the public interest in baseball. Since the only organized ball for women in the country was softball, the league created a hybrid game which included both softball and baseball. Wrigley had scouts all over the United States, Canada and even Cuba signing players for tryouts. About 500 girls attended the call. Of these, only 280 were invited to the final try-outs in Chicago, where 60 of them were chosen to become the first women to ever play professional baseball. The 60 players were placed on the rosters of four fifteen-player teams. Then, four non-Major League cities were selected that were in close proximity to the AAGPBL headquarters in Chicago and close to each other: Rockford of Illinois, South Bend of Indiana, and Racine and Kenosha of Wisconsin. Publicist Arthur Meyerhoff was given the responsibility of coordinating operations with city officials and civic leaders in communities, as well as a projected budget was developed. The first spring training of the new league was set for May 17, 1943, at Wrigley Field in Chicago.

Phyllis Koehn survived the final cut to become one of the original players signed by the league. The average full-time worker made $1,299 a year in the 1940s, according to one estimate—or about $25 a week. Players in the league were offered between $50 and $125 a week during a three-month, 108-game season. Koehn recalled in an interview to Chicago Tribune that she made $60 a week: Twice the money I made on my job as a secretary at Oscar Mayer. A sportswriter once referred to her as sugar cane in an article because of the sound of her last name. Her teammates shortened this to her nickname Sugar.

A versatile and dependable player, Koehn was able to play all positions except catcher, playing mainly as a starting pitcher. She entered the AAGPBL in 1943 with the Kenosha Comets, playing for them two and a half years before joining the South Bend Blue Sox (1945-'48), Peoria Redwings(1948), Racine Belles (1948-'49), Fort Wayne Daisies (1949) and Grand Rapids Chicks (1950). In her rookie season, she hit a respectable .238 batting average with four home runs, considering the league's dead-ball era.

Koehn started 1945 in good form. At one point during the season she was second in the league with 18 runs batted in, but Kenosha traded her to South Bend along with Pauline Pirok (first with 20 RBI) in exchange for Lois Florreich (.243 BA) and Dorothy Schroeder(.179 BA). Her most productive season came in 1946, when she won a career high 22 games as a pitcher after the league expanded to eight teams. She made seven playoffs appearances with Kenosha (1943-'44), South Bend (1946-'47), Racine (1948), Fort Wayne (1949) and Grand Rapids (1950), but could not reach the league finals. She was also one of two hundred players to attend the first AAGPBL spring training outside the United States, which was held in 1947 in Cuba at the Gran Stadium de La Habana.

Following her baseball career, Koehn went to work for Zenith Electronics for 34 years. She never married but was a loving caregiver to her nephews and great-nieces and nephews. After retiring, she stayed active as a bowler and golfer.

Phyllis Koehn, along with her former teammates and opponents, received their long overdue recognition when the Baseball Hall of Fame and Museum dedicated a permanent display to the All American Girls Professional Baseball League in 1988. She lived the last years of her life in Downers Grove, Illinois, where she died at the age of 84.