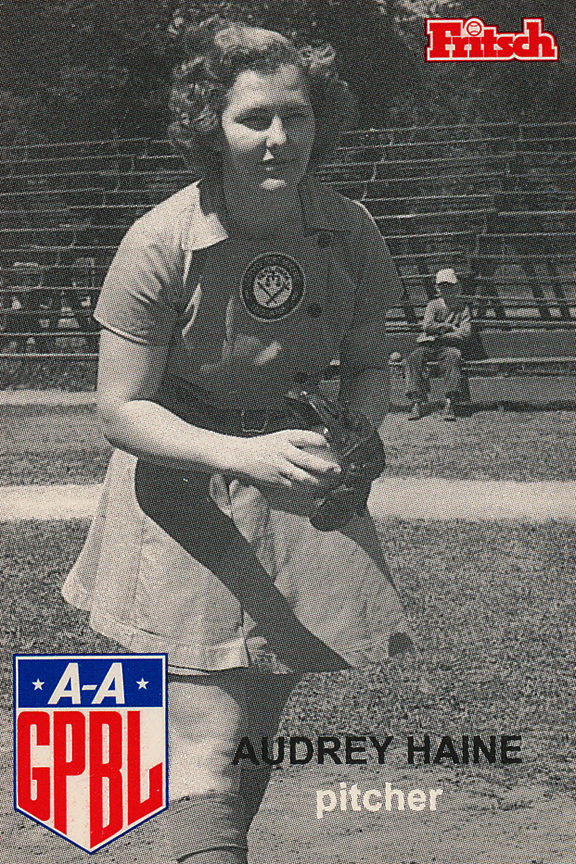 Hear about Audrey's experience and her husband Bud's experience in their own words through the Grand Valley State Oral history project.

The tall Canadian is an imposing figure on the mound, who has a strong side-arm curve. She continued to be a tower of power on the mound for all the teams she pitched for in the AAGPBL. To her credit she has a seven inning no-hitter for Minneapolis against Kenoshain 1944. She plays plenty of golf in her spare time. She continues to live in the states after getting married and raising a family.

On September 11, 2021, Audrey Haine Daniels was welcomed into her heavenly home by a sweet embrace and the cheers of multitudes.  Audrey is survived by her husband, five children, and eight grandchildren.  She was preceded in death by a daughter, a daughter-in-law, and a granddaughter.

Audrey was born on May 9, 1927, in Winnipeg, Manitoba, Canada, the youngest of seven children.  She adored her mother, Katherine, who instilled in her a spirit of adventure and the confidence to conquer life’s opportunities and challenges.  Audrey’s love of competition first revealed itself at age 15 when she demonstrated her legendary yo-yo skills at a local competition, later sharing these tricks with her children and teaching them “walk the dog,” “around the world” and “rock the baby.”  In school Audrey played softball and volleyball.   She was awarded a custom-made leather jacket for winning a volleyball championship in 1943.   This jacket is still worn today by the girls in the family.    Along with volleyball, Audrey honed her baseball skills playing with the boys in the streets of Winnipeg, where she met her future husband, Bud.  They spent countless hours playing catch.  At the age of 16, Audrey was scouted and recruited by the All American Girls Professional Baseball League (AAGPBL).  The League provided entertainment, competition and kept the baseball stadiums active as the men went off to war during World War II.  Just a few days after her 17th birthday, she was off to Chicago for spring training -- quite an adventure for someone who had never been more than 100 miles from home.  Over the course of the years 1943 through 1951, she pitched for the Fort Wayne Daisies, Grand Rapid Chicks, Minneapolis Millerettes, Peoria Redwings, and Rockford Peaches. Her favorite pitch?  The fast ball!!  She was a tower of power on the mound for all the teams she played for.  Audrey, known as “Dimples” to her teammates, pitched three no-hitters.    The history of the AAGPBL was memorialized in the movie, “A League of Their Own,” and Audrey was one of 40 original players to appear in the movie.  In 1988, the AAGPBL was inducted into the National Baseball Hall of Fame in Cooperstown, New York.  Audrey was personally honored and inducted in 1998 into the Canadian Baseball Hall of Fame and the Manitoba Baseball Hall of Fame.    She loved the League and cherished the lifelong friendships she made with her teammates.  Audrey loved telling her story.  She became passionate about the mission of the League to share her experience and what these ladies did for women in sports.  She frequently accepted invitations to speak at schools, organizations and private events, and happily responded to the thousands of requests for her autograph.

More than baseball, Audrey cherished her role as wife, mother, grandmother and great grandmother.   On November 12, 1948, Audrey married her childhood sweetheart, Bud, at Salem’s Reform Church in Winnipeg, Manitoba, Canada.  As a mother, Audrey took pride in helping her children in whatever way she could:  sewing school clothes, wedding gowns, painting and wall papering their homes, gardening, and cooking.  Baking, however, was her forte and her family was the happy and joyous recipient of a wide variety of pastries, cookies, cakes, and delicacies!  Audrey and Bud moved multiple times and enjoyed the adventure of living in many states and even lived in England for a time.  Ultimately, they settled in Cleveland, Ohio, where they remained for over 50 years.  Audrey and Bud enjoyed many decades of summers filled with visiting family, trips to Canada, playing golf and rooting for their beloved Cleveland Indians.

Audrey had a special and very close relationship with her older sister, Dorothy.  A spirit of adventure surrounded these two.  From standing as lookouts for their older brother’s moonshine enterprise, cruising across Canada in Dorothy’s little yellow Datsun, and, in quieter times, shelling the beaches of Florida, they were always there for each other in love, support, and friendship.

Later in life, Audrey pursued golf and bowling, naturally excelling at both by becoming Club Champion in golf and League Champion in bowling several times over.  She was a natural athlete!

Audrey was an avid reader, writer and storyteller.  She even created her own original "Frankie & Lewis" stories which she told to her grandchildren, deftly weaving them into the storyline – even writing individual stories for them where they were the main character!  Her cursive handwriting was beautiful.  Whatever she decided to do, she did with purpose, commitment and to the best of her ability.  Her creativity, wit and sense of humor were not only evident in her storytelling but in how she approached everyday living.   Even to the end, she exuded a sense of humor and joy and would often break out in song to everyone’s delight.

Bud created a special moment that he shared with Audrey every day.  While in the care facility, each afternoon he would bring her a caramel frappe topped with whipped cream.  He would hold the cup as she sipped through the straw.  She always exclaimed that it was the best thing she had ever tasted - it was heaven!  After each sip, she would say, "more!"  This small ritual brought immense joy to both Audrey and Bud.

Mom was a true angel that lived on this earth for 94 years, 4 months and 2 days, and we are forever grateful to the Lord to have blessed our family with such a caring, wonderful mother -- a beautiful person in every way, a true saint.  We look forward to sharing our Savior’s promise of eternal life in heaven with you, Mom.  Oh the homecoming of a saint -- how beautiful! 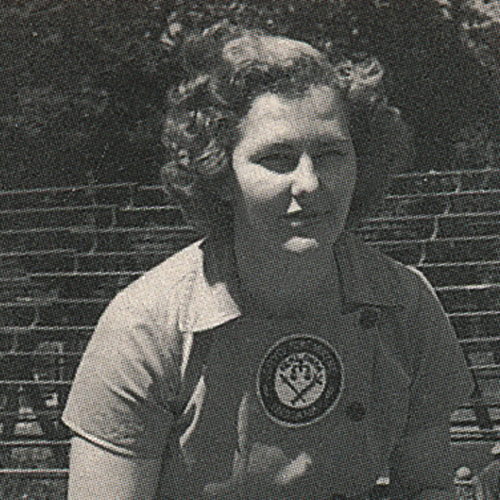