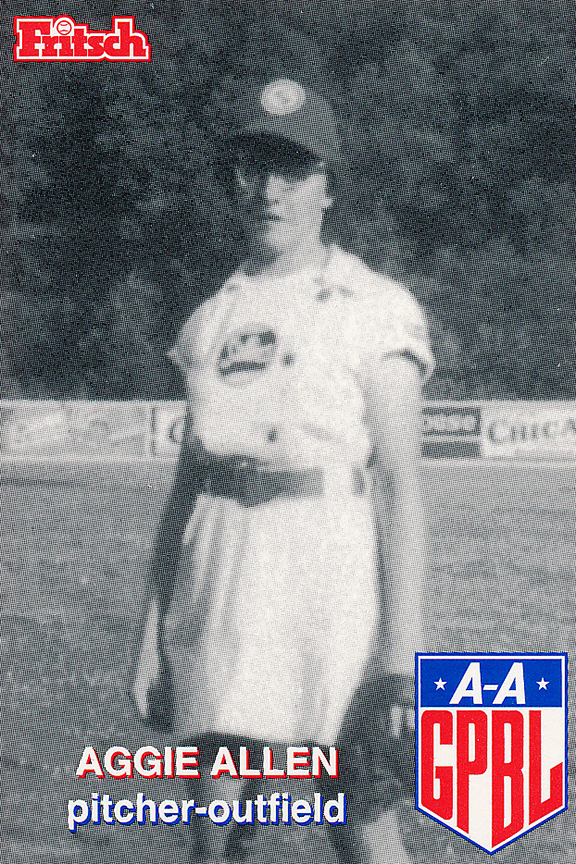 Agnes made the roster of the 1950 Springfield Sallies. The Sallies, along with the Chicago Colleens, were referred to as “traveling teams” or “rookie teams.” These teams played against each other in Illinois and throughout the South and the East. The purpose of these teams was threefold; to develop the talent of players who were on the cusp of being ready for the main league, to generate interest in the league, and to scout and recruit new talent.

The travel was constant, according to Agnes, who was often homesick and wrote home every week. “We’d play in one city, stay overnight, and travel to the next city,” she explained. To pass the time on the long bus rides, the players would sing, talk, and get along, for the most part. Her roommates were Bobbie Liebrich and Pat Barringer, the chaperone/managers for the two teams.

Agnes played for the Lassies from 1951-1953, except for a few games she played with the Battle Creek Belles in 1951. Her strongest season was in 1953, when she had a 10-9 record with a 3.70 ERA. Remembering her three seasons with the Lassies, she recalled teammates Doris Sams (“She was a home-run hitter and a nice gal”); Doris “Cookie” Cook (“Oh, she was funny!”); and two Cuban players (likely Ysora Castillo in 1951 and Isabel Alvarez in 1953).

The Lassie’s manager was Mitch Skupien, who led the 1950 tour and began coaching the Lassies in 1952. “He was a pretty nice guy,” said Agnes. “He’d get after you if he didn’t think you were trying hard. He’d get after you as a team for this, that, the other thing. He was very good.”

At age seventy-seven, Agnes articulated the importance of her years with the AAGPBL. “I think it gave me encouragement to try things I wanted to do that I perhaps would not have,” she explained. “Any time you try something new and can achieve it, it gives you another push to do something beyond that.

Agnes Allen, 81, passed away February 24, 2012 at Avera Flandreau Medical Center in Flandreau, SD.  She was born on September 21, 1930 in Alvord, Iowa to Edward and Bernice (Martin) Allen.

Agnes graduated from St. Mary’s High School in Larchwood, Iowa in 1948.  She then obtained her B.A. from Western Michigan University and continued on to receive a Graduate Degree from the Graduate School of Physical Therapy in Rochester, Minnesota.

Agnes worked for Presentation Health Systems from 1960 to 1980.  She then worked for McKennan Hospital before becoming a self-employed physical therapist for Canton Inwood Memorial Hospital.  She was a therapist for 35 years.

Agnes was a member of St. Mary’s Church in Sioux Falls.  She was also a member of the American Legion Auxiliary and a member of the Elmwood Ladies Golf League.  She was an avid athlete, having pitched in the All-American Girls Professional Baseball League during the 1940’s and 1950’s.  She skied, played tennis and golf.  Agnes also enjoyed a good bridge game and raucous conversation.  She loved to paint, and was good at it, although she wouldn’t say so.

Agnes is survived by nieces, nephews, cousins and many friends.  She was preceded in death by her parents, two brothers and her sister.

Visitation was at Barnett-Lewis Funeral Home with a Scripture Vigil and a Rosary at 7 PM.  Mass of Christian Burial was Tuesday, 10 AM at St. Mary’s Church in Sioux Falls, with burial at St. Mary Cemetery in Alvord, IA.