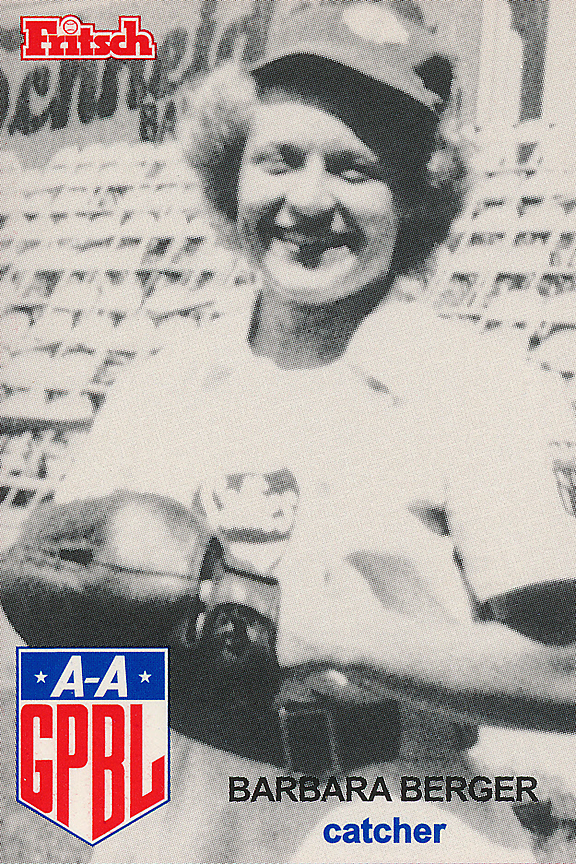 Barbara A. Brown, nee Berger, 85, beloved wife of the late George; loving step-mother of Steve M.D. (Diane), Stuart (Val) and Scott (Darlene); step grandmother of seven; great grandmother of many; devoted daughter of the late Fred and Alice Berger; dearest sister of Fred (the late Lois) Berger, Norma (the late Bobbie) Taylor and the late Audrey (the late Anthony) Annarino; dear Godmother of Susan Kohs and aunt of many.  She died January 27, 2016.

Bergie, as she was commonly known, was a professional baseball player with the AAGPBL in 1949 and 1950. After her stint in baseball, she went on to teach P.E. at Proviso East H.S. She will be deeply missed by all who knew her, especially her niece Connie and great niece Angela who were her caregivers.

When Barbara Brown was growing up in Maywood in the 1930s and ‘40s, her great-uncle tried to persuade her and her sister, Norma, to act like “ladies.”“He’d try and make us ‘girls.’ He’d say, ‘You’re not going out with a babushka, are you? You have to wear hats and gloves. You girls gotta be ladies,’ ’’ said Norma, 83. “He would give us manicure sets for Christmas.”Meanwhile, their mechanic father bought them ice skates and bikes and played catch with them for hours.

Norma recalled the results of her great-uncle’s femininity campaign.

“It didn’t work,” she said. “We played ball and shot marbles. We didn’t throw like girls and we could bat good.”

Barbara and Norma, who grew up playing baseball on a boy-filled block in Maywood, went on to play for the All-American Girls Professional Baseball League, featured in the 1992 movie “A League of Their Own.” The AAGPBL helped keep the sport afloat when men were going off to World War II.

Mrs. Brown, a catcher, played for the Chicago Colleens in 1949 and the Racine Belles in 1950, according to the league. She died Jan. 27 in hospice care after a struggle with dementia, said her sister, Norma Taylor, who pitched in 1950 for the Springfield Sallies. Barbara Brown was 85.

The sisters are among the AAGPBL players listed in the Diamond Dreams exhibit at the National Baseball Hall of Fame & Museum in Cooperstown, N.Y.

When the movie came out, “I almost cried at it, it was so real,” Norma Taylor said. They enjoyed being celebrated at events at Wrigley Field and other stadiums. Returning home from a trip to Cooperstown, “We stopped at a rest area, and we had our T-shirts on,” she said. “People were stopping, asking if they could have our autographs . . . I get mail every week from people wanting our autographs ever since the movie came out, from all over the United States and even another country.”

They attended Proviso East High School, where Mrs. Brown would later return for a career as a P.E. teacher. They played badminton, volleyball and tennis. “I was a pitcher, and she was a catcher,” Norma Taylor said, “and we played catch constantly in front of the house.”

“We were so interested in sports. We played softball, underhand pitching,” she said. They were still in grade school when they played for a team sponsored by a gas station, “Refiners Pride.”

They tried out for the AAGPBL in Marquette Park. Others auditioned at Wrigley Field for Cubs owner and chewing gum czar Philip K. Wrigley, who had pushed for a womens’ league to keep crowds coming to the ballparks in wartime.

Pro sports opened the world to Mrs. Brown, who was Barbara Berger when she was growing up on 17th Avenue in Maywood. Before joining the league, the Berger sisters had never really ventured beyond Ohio, Indiana and Wisconsin.

As balllplayers, they criss-crossed the country by bus to play for cheering crowds in stadiums. “I traveled down South, up the East Coast, New York, a stadium in Washington, D.C. We went to Canada,” Norma Taylor said.

Touring the South, she saw “Colored Only” restrooms. “I was so naive,” she said.

Their great-uncle’s lectures reared up again when they entered the league. “We had to wear skirts getting on and off the bus and bobby sox and nylons,” she said. “They were pretty strict that way. We had a curfew.”

“In 1950, when we finally stopped playing baseball, our father said we should get a job or start doing something,” Norma Taylor said.

Barbara earned her bachelor’s and master’s degrees from the University of Illinois and became a P.E. teacher. At 38, she married George Brown, “ a widow man” who had lost his wife, her sister said. They met while playing in the Chicago Badminton Club.

The Browns lived for a time in Largo, Fla., where they stayed active by walking and biking. To be closer to family in Illinois, they moved to Murray, Ky. After her husband died, Mrs. Brown moved to a condo in Lombard.

Mrs. Brown is also survived by her brother, Fred Berger; her stepchildren, Scott, Stuart and Dr. Steve Brown; seven step-grandchildren, many great step-grandchildren; a goddaughter, Susan Kohs, and many nieces and nephews. Services will be private.