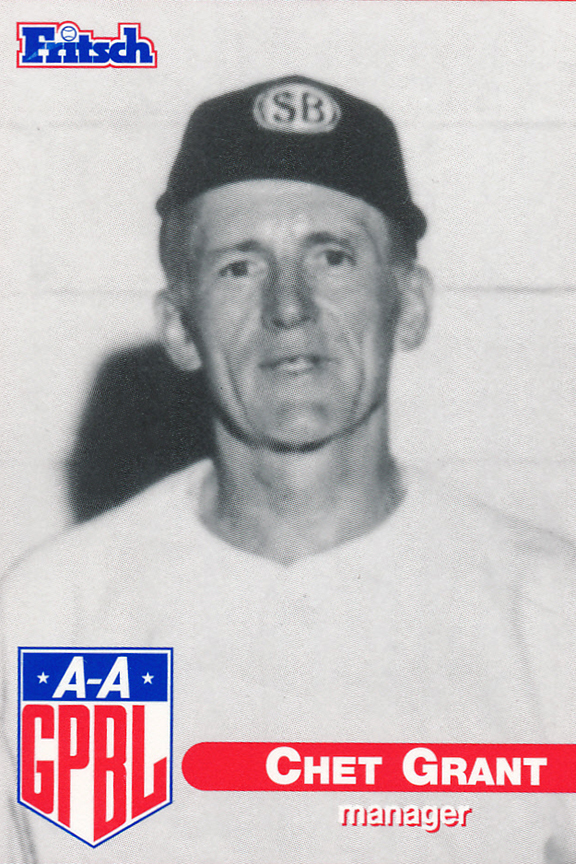 Donald "Chet" Grant managed the South Bend Blue Sox in 1946-47, and was with the Kenosha Comets in 1948.  He acquired his baseball knowledge early as his father and uncle played and managed minor league teams.

After graduating from South Bend High School in 1912, where he was an outstanding student/athlete, Chet played baseball, basketball and football at Notre Dame.  He was a 138-pound quarterback on Knute Rockne's team in 1916, and also set a school record in 1916 that stood for many years when he returned a punt for 95 yards.

His college education was interrupted by World War I, and Chet served as a lieutenant in the US Army of Occupation before returning to Notre Dame for the 1920 and 1921 seasons.  As a starting quarterback in 1921, he led the Fighting Irish to a 10-1 record. Chet also came back to ND to be the backfield coach under head coach Elmer Layden. Chet passed away July 24, 1985.

At a young age, Chet Grant took an active interest in South Bend athletics, particularly Notre Dame football, and at the age of eighteen he became the sports editor for the South Bend Tribune. Ten years later, he enrolled at the University of Notre Dame where he played forward for the basketball team and, in his late twenties, became the backup quarterback for Knute Rockne's football squad in 1920—the same year the legendary George Gipp died of complications from pneumonia. Under Grant's direction as the starting quarterback the following year, the team amassed a record of 10-1, with their only loss at undefeated Iowa.

Years later, Grant would return to coach the Notre Dame backfield for Elmer Layden's team from 1934-1940, and eventually would become a curator for the Sports and Games Collection at the Notre Dame Archives. Besides this, he managed from 1946 through 1947 in the All-American Girls Professional Baseball League for the South Bend Blue Sox, leading his team to a collective 127-96 record and two consecutive playoff appearances. He returned to manage the Kenosha Comets in 1948, ending fourth in the five-team Western Division with a 62-64 mark.