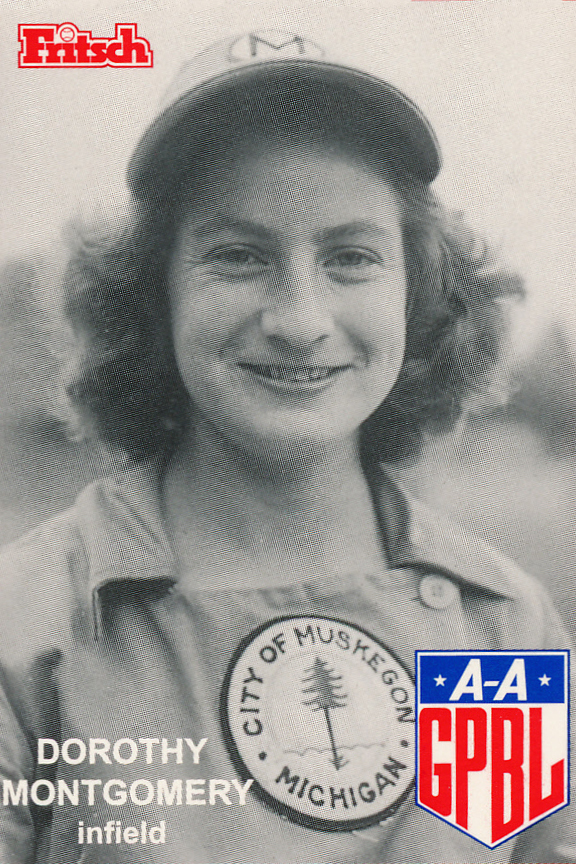 What Monty can do to a guitar, cornet and bubble gum is something to hear and see. Monty was used as a utility player, playing shortstop and second base.  She was found by the league while playing softball in a state tournament.  She tried out and practiced with Racine in 1945, but was cut before the season began.  In 1946, she was invited back and was allocated to Muskegon.  In 1947 she wentto Cuba for spring training, but when the teams returned to the U.S. she was cut.

Dorothy Elizabeth Montgomery, 85, of Chattanooga, passed away on Thursday, Sept. 17, 2009, after a short illness.

She was born on Feb. 6, 1924 in Asheville, N.C.  Dorothy was a 1943 graduate of Red Bank High School and received her BS degree from the University of Chattanooga in 1946.  She was employed with Peerless Woolen Mills during her college years and played professional softball from 1945-1947 with the All American Girls Professional Ball League.  Dorothy spent 1945 with the Belles of Racine, 1946 with the Muskegon Lassies, and 1947 with the Grand Rapids Chicks.  She was a member of the All American Player’s Association, and the Women’s Softball Hall of Fame.  After Hanging up her cleats, Dorothy became a Registered Cytologist for 28 years.  She was a former teacher at Tennessee Vocational School and Laveran High School.  Dorothy was also employed with Railway Express Agency, Erlanger Hospital and Combustion Engineering as a nurse.  Retiring in 1992 she moved back to Chattanooga and enjoyed softball, bowling and motorcycles.

She was preceded in death by her parents, Clarence Thurmond Montgomery and Helen Lillian McDuffit.

Dorothy is survived by numerous friends.