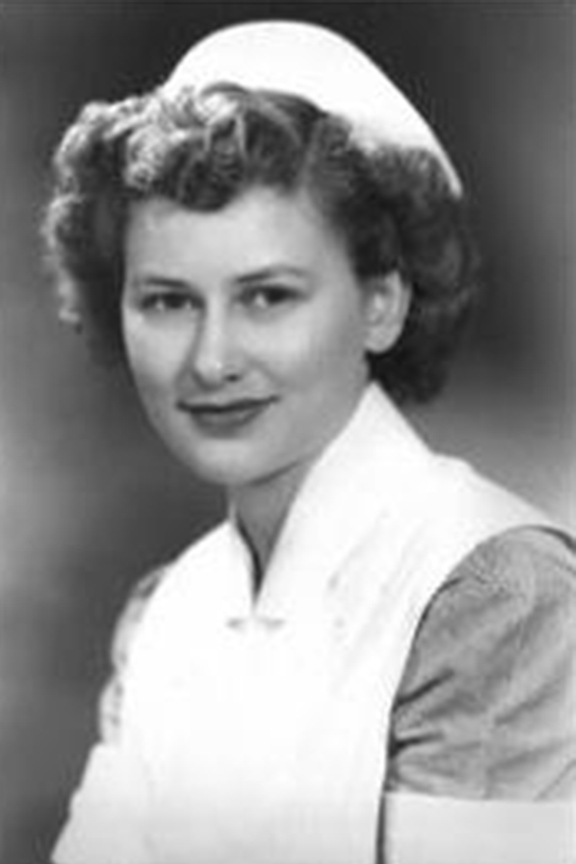 Erla Jean Thomas Reynolds played briefly in the AAGPBL in 1944.  Originally from Winnipeg, Manitoba, Canada, where an AAGPBL scout saw her play, she was recruited to the AAGPBL while attending the now defunct Parson’s College in Fairfield, Iowa.

Thomas attended the AAGPBL’s 1944 spring training camp in Peru, Illinois and was assigned to the Kenosha Comets.  Her tenure with the team and the league was short-lived, as she was released on June 2, 1944.

After being cut, Erla finished college and continued on to Case Western Reserve nursing school where she graduated with a Master’s Degree in Nursing.  She then moved to St. Petersburg, FL to be near her parents, who had moved from Winnipeg.  Erla became a naturalized U.S. citizen and continued playing ball for local women’s teams (Mound Park Nurses and West Coast Title).  She was a surgical nurse in a children’s hospital (Mound Park, which became All Children’s Hospital).

Erla being crowned as home coming queen at Case Western Reserve in the fall of 1944.

Erla met her husband, John M. Reynolds on a Florida softball field.  He was coaching another women’s team and was captivated by Erla’s great arm and ability.  When their three children came along, Erla stopped playing ball but only until they became old enough to play, too.  At that point, she picked up her glove again and played for the First United Methodist Church girls’ softball team along with her two daughters.  The team was coached by husband John with her son as an assistant.

Erla Jean (Thomas) Reynolds, 80, of St. Petersburg, died Monday (May 21, 2007) at Westminster Suncoast. Born in Winnipeg, Manitoba, she came here in 1950 from Fairfield, Iowa. A graduate of Parsons College, she was homecoming queen, editor of the Portfolio, president of Empyreau sorority and a member of the college basketball team. She received a master's degree in nursing from Case Western Reserve University in Cleveland. In 1944 she was a catcher for the Kenosha Comets, an All American Girls Professional league, and was inducted into the Cooperstown Hall of Fame. Locally she was a surgical nurse at Mound Park Hospital, now Bayfront Medical Center, and All Children's Hospital, where she retired after 20 years. She was a member of First United Methodist Church. She played softball for the West Coast Title and Mound Park Nurses. Survivors include her husband of 54 years, John M.; a son, John L., St. Petersburg; two daughters, Anne Reynolds, Arlington, Va., and Shirley R. Boone, Venice, Fla.; and four grandchildren. R. Lee Williams & Son Funeral Home & Crematory, 49th Street N Chapel, St. Petersburg.