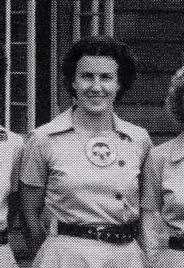 Janet was a righthanded pitcher. She was also a school teacher. She attended the University of Saskatchewan and played tennis for them.

Janet Margaret Perkin (nee Anderson) passed away on March 30, 2012. Born November 21, 1921 in Montreal, QC to Tom and Mary Anderson, Janet grew up in Bethune, SK and went on to become a teacher. She played one season in the All- American Girls Professional Baseball League, won the first Western Canadian curling championship in 1953, and was a three-time provincial curling champion. She was a long- time resident of Regina. Janet was predeceased by her mother and father, Tom and Mary Anderson, her husband Max, of 57 years, and two infant daughters. She is survived by her daughter, Jean (Fred) Lowenberger of Pilot Butte, son Tom (Brenda) Perkin of Punnichy, grandchildren; Fred (Tanya), Jeff (Amanda), Michael (Leanne), David (Hope), Kristine (Colby), and Janean (Stephen), great-grandchildren; Jaida, Brooklyn and Abbey. A celebration of Janet's life will take place at the Zion United Church at 120 Broad Street on Thursday, April 5th at 11:00 a.m.