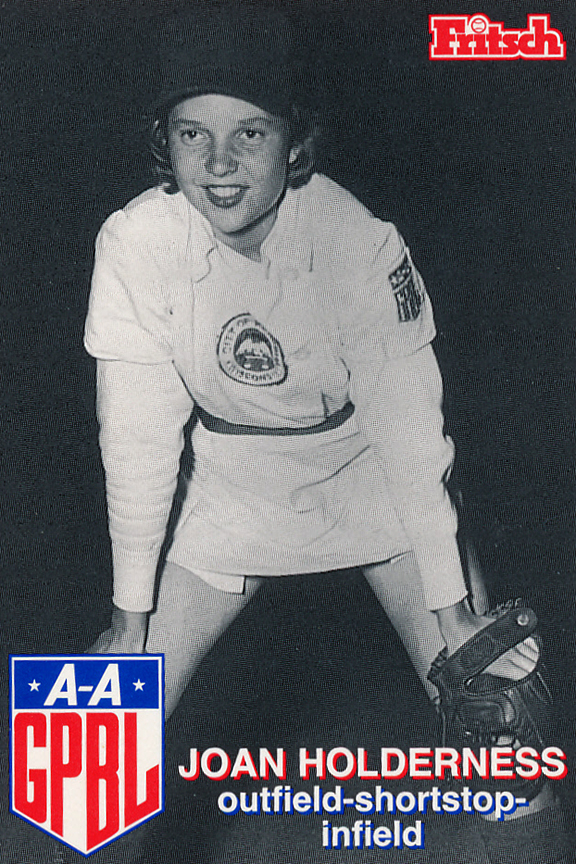 Hear about Joan's experience in her own words through the Grand Valley State Oral history project.

Joan started her career as the first bat girl for her hometown Kenosha Comets in 1947. The following year, she played for an AAGPBL farm team in Chicago before breaking into the big leagues in 1949. Joan had a cannon for an arm and was cool under pressure as a pinch hitter.

Joan was born on March 17, 1933 in Kenosha, WI to Charles (Cy) and Gladys Williams Holderness.

Joan was a natural athlete and did very well at most any sport she took an interest in. At the age of 14 she was invited to become bat girl for her hometown team, the Kenosha Comets, one of the teams in the All American Girls Professional Baseball League (AAGPBL), made famous in the 1992 movie “A League of Their Own.” Joan was President of the AAGPBL Players Association at the time the movie was being filmed. At 15 years old, she played for an AAGPBL farm team, and in 1949 moved up to the “big leagues,” first playing for the Kenosha Comets, then the Grand Rapids Chicks, and finally for the Battle Creek Belles.

Joan was a member of the Professional Women’s Bowling Association 1963-1968. Her Highest Average: 192, Highest Game: 296, and Highest Game Series: 776. She was a member of Milwaukee’s much acclaimed Pitch’s Lounge Team, winner of the national championship in both 1963 and 1964.

In October 1965, Joan moved to Florida where she continued her love of bowling and also became an avid golfer. In 1970 she won the Florida Queens Tournament in Clearwater. In 1977 in the “Bowling Tournament of the Americas,” Joan won the Women’s All Events, Singles, and Doubles. In 1981 she was inducted into the Florida State Hall of Fame for Bowling Achievement, then the St. Petersburg, FL Hall of Fame, and in 1984 the Clearwater, FL Hall of Fame.

After serving 32 years with the Federal Government, Joan retired in 1988 from the Strategic Air Command at MacDill Air Force Base in Tampa, FL as a Computer Systems Analyst. After her retirement Joan moved from Clearwater to Spring Hill, FL and later began spending her summers on the beautiful golf courses in Fairfield Glade, TN. In 2007 she left Florida to become a full time resident of Crossville, TN, where she became an avid Lady Vols fan, and continued to cheer on her Chicago Cubbies and Green Bay Packers.

Joan is survived by a brother, two sisters, five nieces and three nephews, as well as several great-nieces and nephews all of whom she loved dearly.

Joan leaves behind a multitude of friends, including two very special friends.

Joan was predeceased by her parents, Charles (Cy) and Gladys Holderness.

In mid-September, Joan’s remains will be interred in the Greenridge Cemetery in Kenosha, WI with a “Celebration of Life” to take place at that time.

In lieu of flowers, memorials may be made in her name to the American Cancer Society, the American Heart Fund, the Pat Summitt Alzheimer’s Clinic at www.patsummitt.org or to the All American Girls Professional Baseball League (AAGPBL).