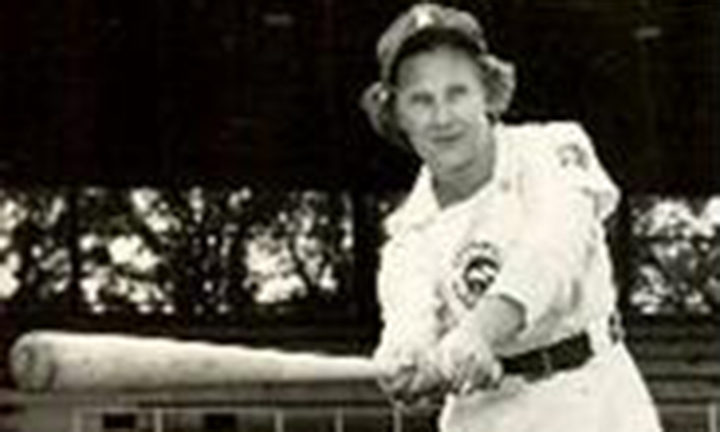 Joan Jaykoski’s played fast pitch softball in Fox Valley (Wisc.) where she was scouted and signed by the AAGPBL as an outfielder and pitcher right out of high school.

At the end of her AAGPBL playing years, Joan studied nursing and worked as a nurse in Milwaukee before taking a job in General Motors’ Delco Division documents library.  Later, Joan returned to nursing and worked for GE Medical, assembling medical scanning equipment.

Baseball remained Joan’s favorite sport, and she was an avid Brewers’ fan.

Joan M. Jaykowski, of Waukesha, formerly of Menasha, passed away on Saturday, October 15, 2011; lovingly surrounded by her family at her home, after a valiant fight with cancer, at the age of 78 years. She was born on February 23, 1933, in Menasha, WI, the daughter of John and Cecilia Jaykoski. Joan played professional baseball in the All-American Girls Professional Baseball League 1951-1952, for the Kenosha Comets, the Grand Rapids Chicks and several other pro teams. Her name is on a plaque in the Brewers Hall of Fame and in Baseball's Hall of Fame in Cooperstown. She was an avid Brewers and Packer Fan.  Joan will be sadly missed by longtime friend, Eva Stork, other family and many friends. (Appleton Post-Crescent, Appleton, Wisc., 10/18/11.  The remainder of the article was written by Amy Rabideau Silvers for the Milwaukee Journal Sentinel 10/18/11.)

Jaykoski and the other Kenosha Comets had to wear skirts as part of their uniform.

In the places where it matters the most, Joan Jaykoski's name is spelled the right way.

It is spelled J-a-y-k-o-s-k-i at Miller Park in a display about the All-American Girls Professional Baseball League - and at the Baseball Hall of Fame in Cooperstown, N.Y.

Jaykoski did her ball playing as a young woman, right out of high school in Menasha. It was only later in life, when she was working for the federal government, that she was told her family name was not her legal name.

"It was for classified work," said Eva Stork, her longtime friend. "They discovered her birth certificate had a W. It was spelled Jaykowski."

"I couldn't afford to have my name legally changed," she later told Stork. It was cheaper to get a new driver's license and change other documents than go to court to correct the mistake.

Jaykoski died of cancer Saturday. She was 78.

"She played softball - fast-pitch softball - in the Fox Valley," Stork said. "And she was scouted and signed right out of high school."

That was during the final years of the All-American Girls Professional Baseball League. The league was the brainchild of Philip Wrigley, owner of the Chicago Cubs, during World War II.

"She played for the Kenosha Comets in 1951," as a pitcher and centerfielder, her friend said. "When they folded, she was sold to the Grand Rapids Chicks."

It was a different time, and not just because a women's sports team would be called "Chicks."

"They played in skirts and had to slide," Stork said. "They were never allowed to go in public in slacks or shorts. They had to wear skirts, even to go for breakfast before the games."

The most frustrating moment, though, came on the field.

"She had a no-hitter going into the ninth inning of one game and walked the first batter," Stork said. "And she was pulled. Frankly, that really ticked her off."

Jaykoski played with the Chicks in 1952. She left to study nursing and ended up working as a nurse in Milwaukee. She later took a job with General Motors' Delco division, working in the company's documents library.

The job involved handing documents related to equipment for NASA's moon landing in 1969.

"She knew what the moon landing vehicle looked like years before it happened," Stork said of the landing. "It was all classified work."

Jaykoski remained quietly proud of her time in sports.

"It was a learning experience for her, to be out in the world and to be away from home," Stork said. "There aren't too many people who can say they played professional women's baseball. It's a part of history."

"A year ago, until she had cancer, she could do 45 push-ups on her knuckles," Stork said. Earlier, Jaykoski could do push-ups on her fingertips. She also studied taekwondo and followed sports.

"Baseball was her favorite. She was an avid Brewers fan," she said.

While Stork decided to run the newspaper death notice with her friend's legal name, it will be spelled the right way in one more important place.

Visitation will be held from 11 a.m. Wednesday until the funeral service at 12:30 p.m. Both will be held at Beautiful Savior Lutheran Church, 1205 S. East Ave., Waukesha.