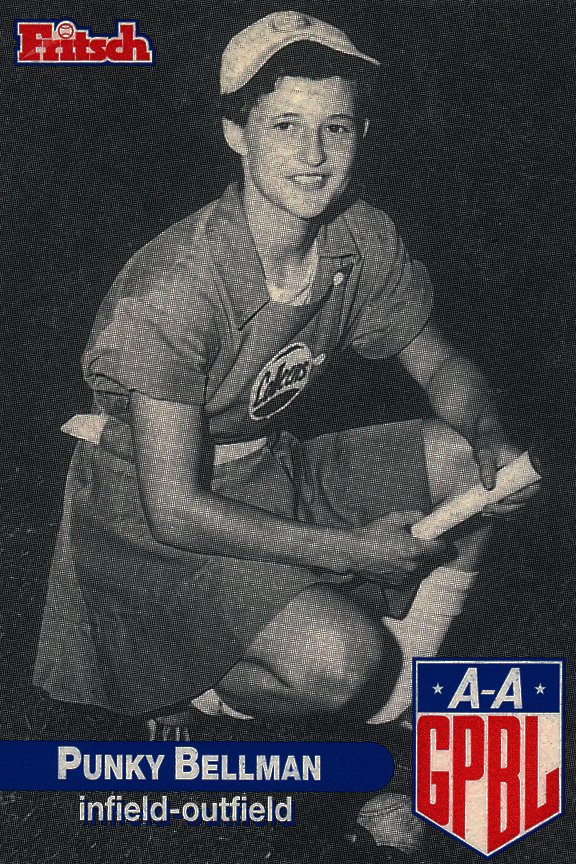 No stats were recoded for the 1949 Touring Teams.

Following is an article about Lois by Joan Broz for the Lisle, IL Daily Herald fromBy Joan G. Broz on 10/6-7/2008

Lisle woman remembers her time as a professional baseball player

She likes how first baseman Derrek Lee, catcher Geovany Soto and pitcher Carlos Zambrano play their positions. The lifelong Cubs fan tries to watch every televised game from the front row of her home at Snow Valley Nursing home in Lisle.

Balchunas' list of Cubs greats includes legendary "Mr. Cub" Ernie Banks, second base whiz Ryne Sandberg and player-turned-Cubs-broadcaster Ron Santo. She admires how Santo opened the door for players to reach for their dreams and overcome a hurdle to play professional baseball.

It is a response Balchunas knows quite well.

At the age of 22, Lois "Punky Bellman" Balchunas swung a bat to help put a crack in the glass ceiling, allowing women to play professional baseball. She played for the All-American Girls Professional Baseball League's Chicago Colleens during its 1949 season.

Lois Bellman was born in Chicago in September 1926. With one sister, the girl's father considered Lois "his little boy" and the two spent hours pitching and catching ball in the backyard. The national pastime was something Lois enjoyed.

In school, Bellman played volleyball and basketball. She played the sport she liked best - baseball - whenever and wherever she could.
At tryouts at Chicago's Marquette Park, Bellman qualified to join the AAGPBL player development tour in 1949. Two teams sent players on the tour - the Chicago Colleens and the Springfield Sallies.

The experience of a lifetime included traveling throughout the United States.

"The team paid for everything," Balchunas said. "I remember traveling to the Carolinas, New York, New Jersey, Florida, Texas and everywhere."

To Balchunas, traveling and meeting people were highlights.

"We played almost every day in different towns," she said. "My folks came to visit me in different states. A lot of people came to see us and it was fun to hear the crowd cheer for you."

Balchunas never would have had the opportunity to travel as she did without being a member of the Chicago Colleens. She also made many friends of teammates including Betty Francis, Riley Kotil, Joan Sindelar and Anna Mae O'Dowd.

"Anna Mae O'Dowd was a catcher and was she good," Balchunas said.

During the long and tiring bus rides, players were known to play pranks on their chaperone and each other, something that brings a twinkle in Balchunas's eyes and a smile to her face even today - although she didn't elaborate.

The AAGPBL played from 1943 to 1954. It began as the brainchild of chewing-gum magnate and Chicago Cubs owner Philip K. Wrigley, who wanted to fill Wrigley Field. With the World War II draft, he was afraid the major league would fold with so many men in the service.

The game ball for the girls' league varied over the years averaging 10 inches in circumference - slightly bigger in size than that used in men's baseball. The players wore spikes, played on 90-foot base paths and pitched overhand, just like the men. They played hard, clean games and never hesitated to slide into bases even though their uniform skirt offered no protection from the hard-packed dirt. The results often were huge "strawberries," or bruises.

"We had to wear skirts because they wanted us to be girls," Balchunas said.

The uniforms were belted, short-sleeved shirts with short, flared skirts and elastic shorts underneath. The hats were normal baseball caps fitted to women. The mandatory charm school classes taught players how to apply makeup, style hairdos and use grace and manners.

More than 600 women played for teams such as the Rockford Peaches, Ft. Wayne Daisies and Racine Belles. Balchunas played both infield and outfield and liked the action best at third base and shortstop.

After a year on the road, she left the game and married William Balchunas in 1951. Together the couple bought a home in Lisle. They had three daughters. Sue Randles, Karen Balchunas and Gail Venard eventually had the couple's six grandchildren.

"I practiced right along with them, pitched balls and made sure they could run the bases," she said.

"Mom was a good coach who knew all the basics but also the strategy of the game," Karen Balchunas said. "She made sure we earned our positions and worked hard at it."

The AAGPBL players showed women could play professional sports, and the movie, "A League of Their Own," directed by Penny Marshall, introduced the women's life in the league to a broader, modern audience.

"We always knew our mom played ball, but when the movie came out we learned a lot about her experiences," Venard said. "The baseball cards didn't come out until after the movie."

Balchunas said the movie is an accurate portrayal of the teams and era although the line, "There's no crying in baseball," is pure Hollywood.

The movie led to incorporating the All-American Girls Professional Baseball League and its players in the National Baseball Hall of Fame in Cooperstown, N.Y.

"We have ex-players come in all the time to try and identify our photos," said John Horne, Library Associate of the National Baseball Hall of Fame and Museum.

In Horne's photo of the 1949 Chicago Colleens, three players were unidentified until last week when Karen Balchunas realized one of the women was her mother. Additional photos validated the finding.

Lois "Punky Bellman" Balchunas receives fan mail from all over the world.

"One recent letter was from a little girl in Japan who said a lot of people tell her that it is not ladylike to play baseball," Lois Balchunas said. "I wrote back and said, 'No! You should be able to play if you want to play.'"

Balchunas should know. She played a role in baseball history.