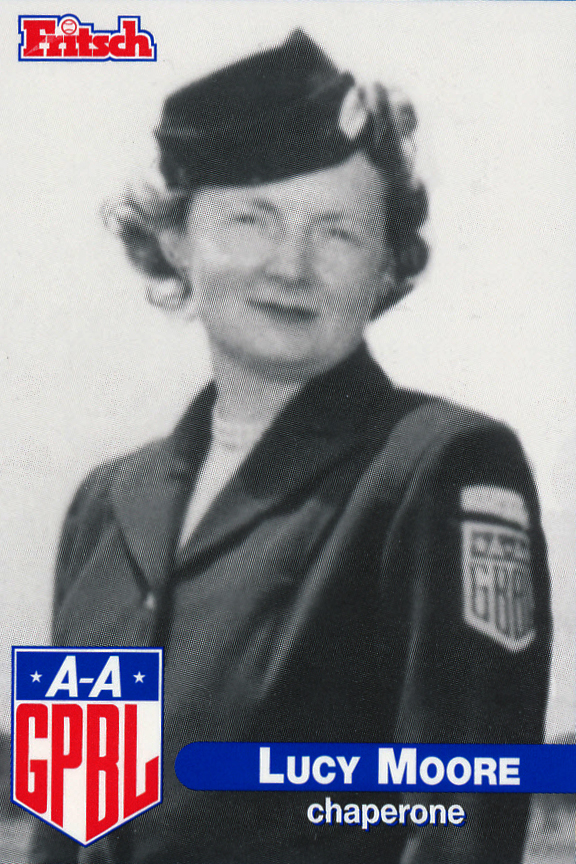 "Lucy" was chaperone of the South Bend Blue Sox from 1945 through 1948, and like all League chaperones, she was responsible for looking after the players both on and off the field.  She assigned them residences, supervised their activities and served as trainer. She traveled with the team to Havana for spring trainning. The players called her "Too-Ra-Loora" and were very fond of her.  She graduated from Indiana State Teachers College, and was a physical education teacher and swim coach at South Bend Central High School.

F. Lucille Moore, 96 of Southfield Village, [South Bend, IN] formerly of Victoria Street, passed away following an illness at 6:46 p.m. Thursday, April 1, 2004, in her residence.

Lucille was graduated from Indiana State University with a degree in education.  For 10 years she was employed as a physical education teacher in the South Bend Community School Corporation at Muessel School and Central High School where she was also the swim team coach.  She retired in 1940 following her marriage.  She served as a chaperone for the South Bend Blue Sox professional women's baseball team from 1945-1948.

Mrs. Moore is survived by her son, his fiance, a niece, a nephew, three grandchildren, and one great-grandson.  She was preceded in death by three sisters and two brothers.

Graveside service and entombment of her ashes were at Riverview Cemetery, LaSalle Mausoleum Chapel.  Funeral Homes, University Area Chapel was in charge of arrangements.

Memorial contributions to Hospice of St. Joseph County, South Bend, IN were suggested.